Home » The Importance of Mulching

Mulch has become something of a mantra for us at The Orchard Project. That’s because it is such a simple action that yields multiple benefits. Once you’ve read this, you’ll understand why we bang on about it so much. Simply defined, mulch is a layer of bulky organic (once living) material placed around the base of a plant. Its primary role is to conserve soil moisture and prevent competition from unwanted plants. But it really is so much more… 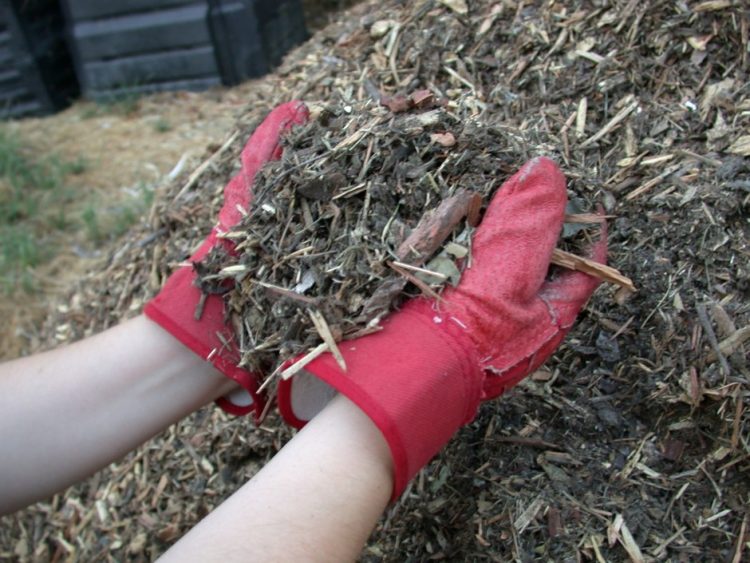 A lack of water can be a key limiting factor to good tree growth. Fruit trees will only expand their roots sufficiently when there is enough water in the soil. A drought-stressed tree may become stunted and is more susceptible to attacks from pests and disease. Aphids and powdery mildew, two common fruit tree enemies, occur more readily in a stressed tree. Watch this video for more details on that.

A layer of mulch acts like a ‘lid’ that allows water into the soil but helps to minimise evaporation. This means your weekly watering goes much further. Water the whole mulch circle so that there is plenty of moist soil for the roots to spread into.

Mulch also adds organic matter to the soil which breaks down to form humus. You can think of humus as the ‘life-force’ of the soil. Essentially, it is the end product of the break-down of organic matter and it provides the ideal habitat for many soil microorganisms. It can hold 80-90% of its weight in moisture, and so is more drought tolerant.

Another key role of mulching is to smother grass and weeds around your tree, preventing them from competing for nutrients and water. Grass is very competitive with its dense mat of roots. It is also allelopathic, meaning that it produces biochemicals to inhibit the growth of the tree. If you plant two trees into some turf grass, mulching one but not the other, after a few months you’ll see the difference: the unmulched tree will be stunted compared to the mulched one.

Grounds maintenance staff strimming the grass in public spaces often end up damaging newly planted trees. Strimmers that get too close to tree stems can strip lashes of the bark. If this happens repeatedly, and especially if the tree is ‘ring-barked’ it will slowly die above that point. But an attractive circle of mulch creates a ‘no-go’ zone, as there should be no need to strim anywhere near the stem if your mulch is doing its job and suppressing plant growth.

Most of the fruit trees we plant are descendants of the wild fruit trees of the Tien Shen forest, so they are forest edge species. The soil in a forest is one dominated by fungi, as fungi are specialists in breaking down the lignin that gives wood its hardness. The ratio of fungi to bacteria increases as more woody material is added to soil as biomass. In a woodland soil this can be 100:1. In contrast, where the dominant vegetation is leafy, like turf, bacteria dominate as they can break down cellulose more easily. We can shift this ratio by choosing a mulch type that is more fungi-friendly.
This means that if you continue to add rough woody material to the area around each tree you’ll be creating a fungal zone around each tree, thereby creating ‘islands’ of optimum soil for your fruit trees.

Wood chip is an ideal mulch for fruit trees. It is long lasting, develops a lovely humus, and attracts a fungal frenzy. It can also be available in large quantities for free in towns and cities, meaning we’re turning a waste product into a valuable resource. By adding it to the soil we are mimicking nature’s way of building forest soil from the top down.

Many people worry that using woodchip will cause ‘nitrogen robbing’. This is the notion that the soil microbes breaking down the woodchip will use up the available nitrogen in the soil. It seems, however, that this phenomenon is overstated. Here we’re talking about adding a layer of woodchip onto the soil surface, not tilling it into the soil. There may be a small loss of nitrogen where the mulch meets the soil surface, but for a deeper root system this shouldn’t be an issue. In fact, this may even increase the mulch’s ability to suppress weeds, as it inhibits the growth of any unwanted seeds present. Finally, as this chip will sit on top of a mulch mat it has a further 6 months or so to break down before even making contact with the soil.

Mulch also adds nutrition, feeding the soil and then ultimately the host tree. By using thinner diameter ‘twiggy’ wood you are adding a higher ratio of cambium layer and bud tissue, both of which contain important nutrients. It is also easier for the fungi to break down as it hasn’t as much tough lignin as older wood. This twiggier wood is known as ‘Ramial’ chipped wood (RCW) and is the ideal fruit tree mulch as it replicates the natural twig and leaf fall for the forest. 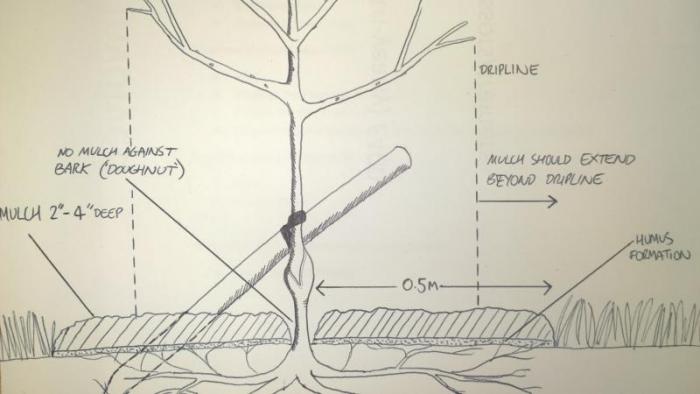 Yes. Mulch will help to stabilise soil temperature, keeping it cool enough for vital soil organisms to do their work in the summer heat. It will help to prevent the loss of top soil during heavy showers. And it will provide habitat to a range of invertebrates.

When you order woodchip from your local tree surgeon specify chip from hardwood species where there has been no signs of honey fungus. In the ‘Holistic Orchard’, Michael Phillips points out that softwood species don’t make a good mulch for fruit trees due to the way the wood decomposes:

“The ‘Brown rots’ transform softwood cellulose to produce polyphenols and allelopathic compounds specifically relied upon by evergreen species to suppress other plant species”.

Hardwood ‘White rots’ on the other hand support an environment which is better for fruit trees. Saying this, our friends at the Brighton Permaculture Trust have been using conifer chip for years and have not noticed any difference in tree health, so experiment with the resources you have access to. 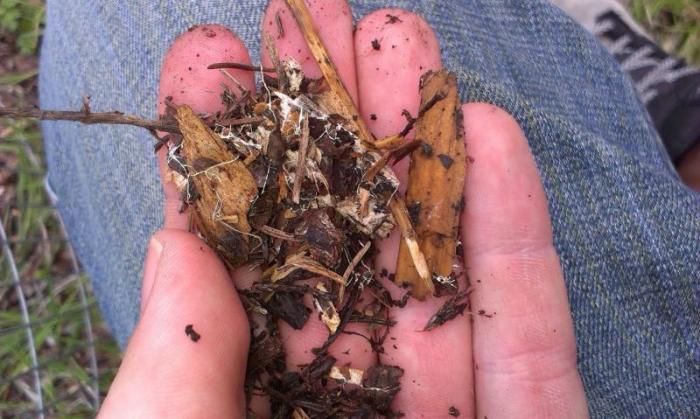 Each tree should have a mulch ring measuring at least 1m in diameter. You can expand it by 30cm each year in the first few years to pave the way for new feeder root growth. Mulch should be a minimum depth of 5cm, and a maximum of 10cm. If you are mulching trees for the first time add a mat of cardboard or hemp to kill off the grass beneath.

If the ground is dry give it a good soak before adding the mat or mulch. Make sure that the mulch isn’t touching the stem of the tree as this may rot the bark; create a ‘doughnut’ shape space between stem and mulch. You may need to communicate with gardeners or park staff that you’ll be mulching outside of the tree cage and that this chip should not be removed or mown. It is a good idea to develop good relationships with the contractors or park staff involved.

So, go forth and mulch!