Orchards provide the perfect habitat for many insects, birds and fungi. There are certain species that love to dwell in fruit trees, feed from their blossom or just set up home in their old, decaying, hollow trunks. The wide spacing between orchard trees and the relatively short lifespan of fruit trees cultivate just the right conditions for some rare and unique creatures and plants.

Here are 10 species that you can look out for in your orchard, and educate your orchard community about too, to help them thrive.

This large, iridescent green beetle is an orchard icon! It is associated with orchards, but has become increasingly rare in the UK with the decline in traditional orchards. It spends most of its life as a larva inside veteran trees, particularly cherry, plum and apple, eating away at the decaying wood, and is often identified by the lumpy “frass”, or droppings, the larvae leave behind. The adult emerges in June to look for a mate. If you are very lucky you might see it basking in the sun or feeding on flowers, particularly umbellifers, but don’t confuse it with the similar, but much more common, Rose Chafer. 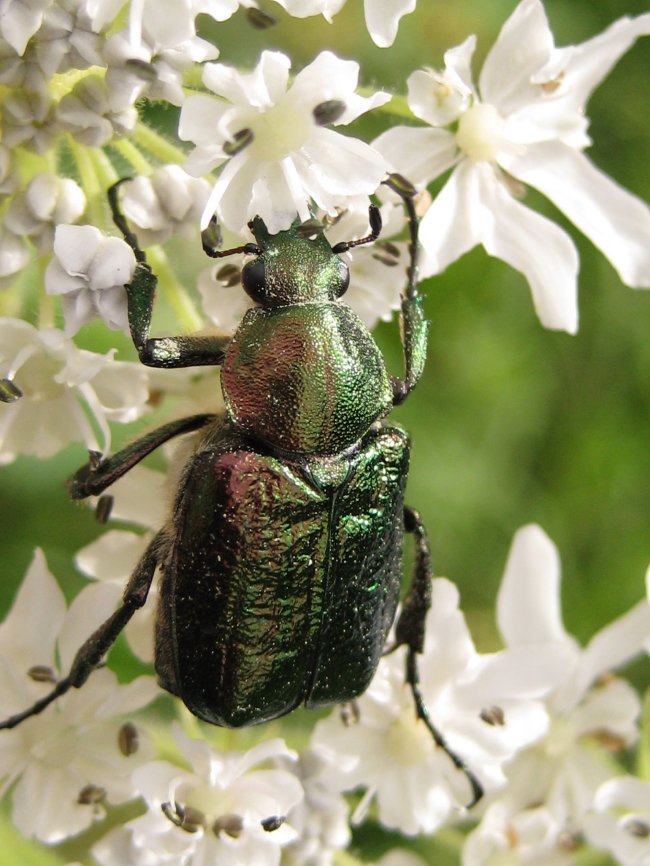 If you fancy trying to find it near you, the People’s Trust for Endangered Species are running a survey in June to better understand the habits and habitats of this noble beetle: find out more here.

This dark blue insect with its bright red ‘belt’ and wings like a stained glass window, is in fact a moth. The larvae live under the bark of old trees, particularly apple, pear and almond. You might be lucky enough to spot an adult flying during the day from June to early August (but only in the south of England). 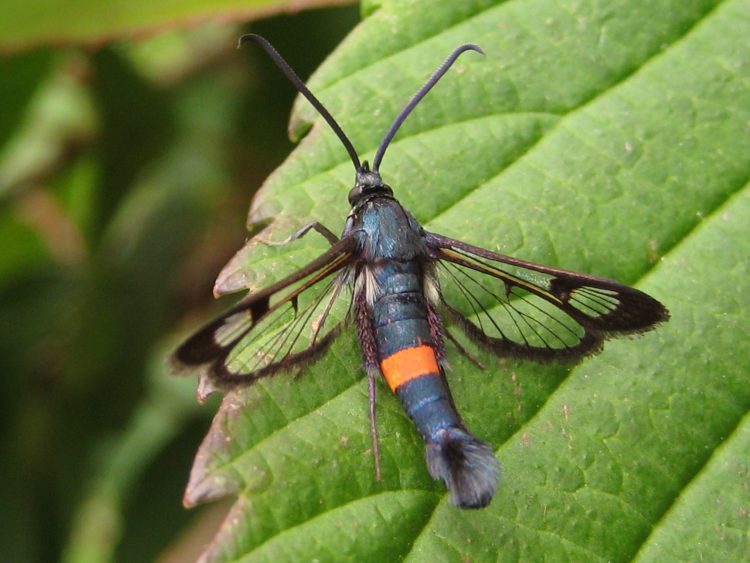 This rare, “solitary” bee only arrived on our shores a couple of years ago from the continent. It is one of over 200 species of bee in the UK that live solitary lives (unlike social bees that live in hives, such as the honey bee and most bumble bees). The female nests in holes in woodwork, or dead woody stems. She can be seen collecting pollen from fruit tree blossom from March to June. Other bees you might see in your orchard are Tawny Mining Bee (Andrena fulva), Red Mason Bee (Osmia bicornis) and the Honey Bee (Apis melifera). For more information on bees, visit http://www.bwars.com/ . 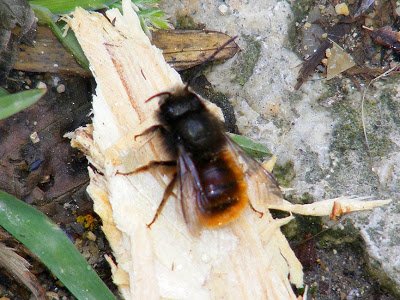 Also known as Shaggy Polypore and Velvet Fungus, you will often see this bulbous orange velvety fungus sticking out of the side of old apple trees. It is not harmful to the tree, but feeds on the wood in the centre that is already dead. Other creatures live inside, such as beetle larvae. This photo was taken at Waltham Abbey orchard in Essex. You can see drops of moisture, as the fungus draws water out of the tree to colonise it. The fungus turns black and falls off each year. 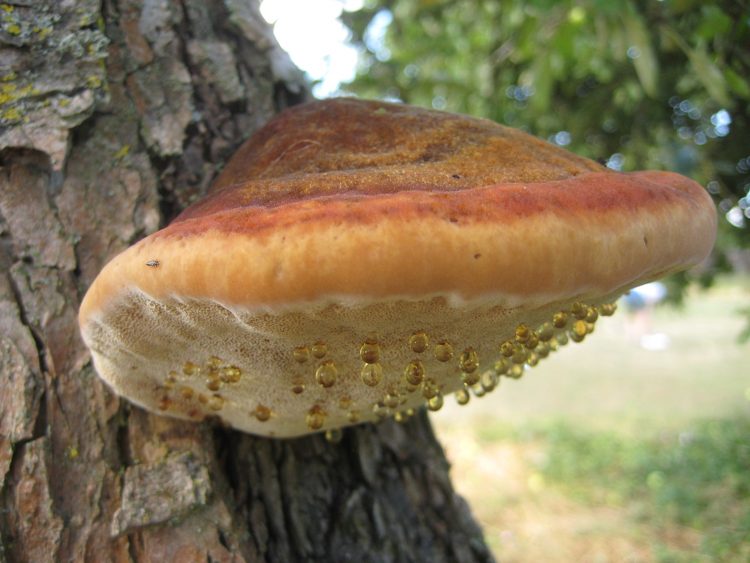 Not much bigger than a sparrow, this woodpecker is much smaller than its more common relative, the Greater Spotted. It eats insects from the bark and leaves of trees, and excavates holes in rotting branches or trunks for a nest; this makes veteran orchards an ideal home for this bird. It is difficult to spot as it tends to live high in the canopy. Sadly, it is also on the RSPB’s red list of birds in severe decline. Find out more here.

Another colourful creature you could be very lucky to find in an old orchard is this rare red and black beetle. Like many beetles, it spends much of its life as a larva, living in dead wood where it preys on other invertebrate larvae. It emerges as a beautiful adult in order to find a mate. We found several in the 100-year-old Lady Gilbert orchard in Harrow, west London. 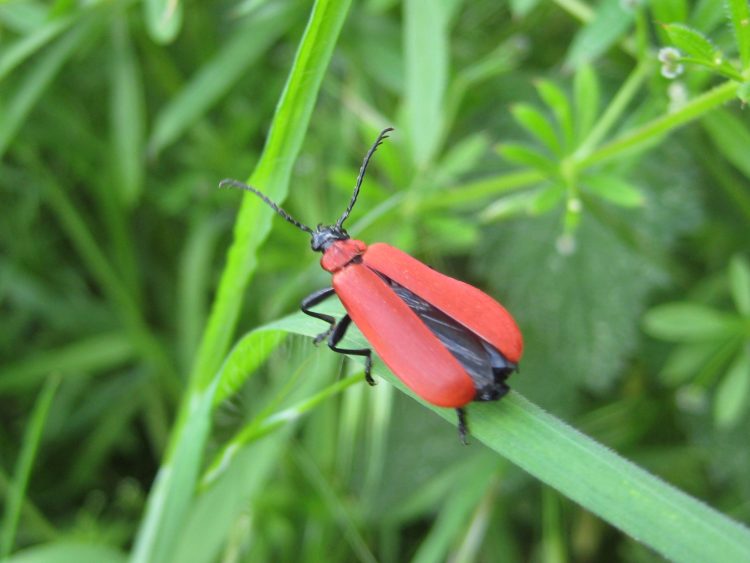 These birds are both types of thrushes and are often observed in autumn and winter in large mixed flocks. They feed on windfall fruit in orchards, as well as berries, hips and haws in hedgerows. The Redwing gets its name from a red patch on its flank, while the Fieldfare is large, handsome, grey and brown. Both birds are in severe decline and are on the RSPB’s red list of highest conservation priority.

This is a rare fungus only found on fruit trees! It is yellowy orange and smells of pineapple when fresh. It is made up of lots of pointed teeth, and forms a kind of crust (rather than a bracket). It is one of species Kew is asking people to look for as part of its “Lost and Found Fungi” project (https://www.kew.org/read-and-watch/lost-and-found-fungi). Only recorded about 30 times in the UK, we were excited to discover its presence in two of the veteran orchards we support, – Claybury and Horton! 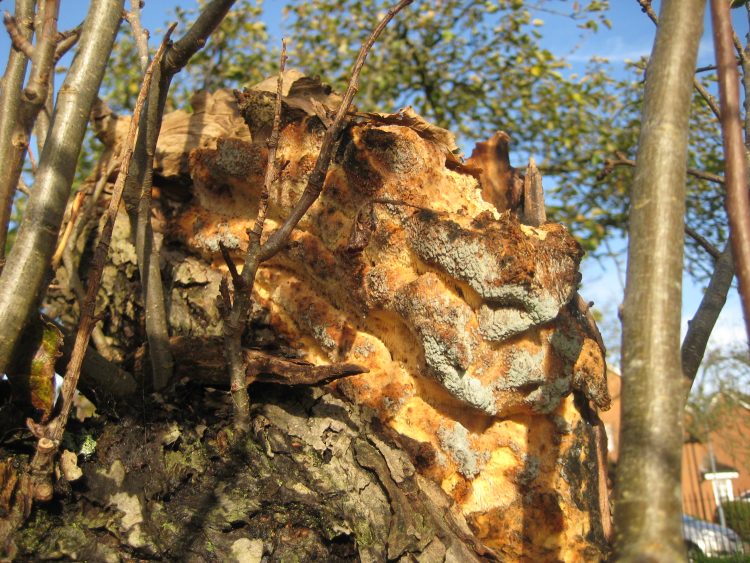 This is one of many “briophytes” (mosses and lichens) that live on orchard trees. They are harmless to the trees. It has long feathery green leaves, and bright red fruiting bodies on long stalks. Some apple varieties support more species of briophytes than others—one study by Leeds University found Bramley apple trees were the best!

Most of us commonly associate this beautiful plant with Christmas and kissing; but not many know that it is semi-parasitic. It takes water and salts from its (unwilling?!) ‘host’ tree but produces its own sugars through photosynthesis. It is regarded as a pest in some orchards in the west of England where it can be prolific, but in other orchards it is deliberately inoculated into trees. The sticky white berries are enjoyed in winter by Mistle Thrushes and Blackcaps. It also feeds the Mistletoe weevil, the Mistletoe Marble moth and three types of bug.

For more fascinating facts on the ecosystems of orchards, download our Orchard Wildlife Factsheet here.