This year we are asking our partner groups if they’d be happy for us to plant one or two ‘experimental’ trees in their orchards so we can begin to build up knowledge of what will thrive here in the city. Permaculture was central to the project’s birth, but it’s only more recently that we’ve been seeking to incorporate its principles into our work. 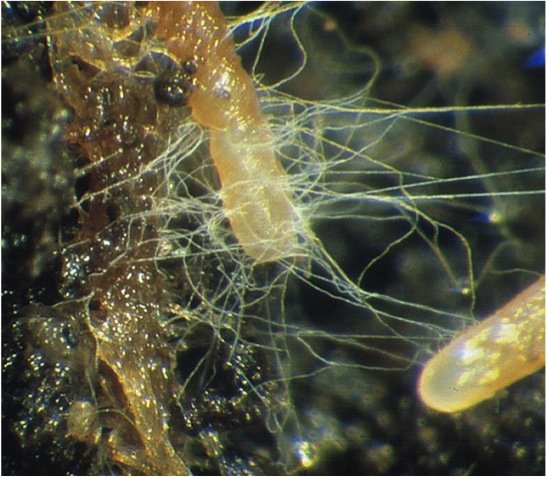 Observation has been a key principle in this move towards a permaculture approach. By observing the conditions of the natural habitat of our fruit trees, in this case the wild fruit forests of the Tien Shan mountains of Kyrgyzstan, from which much of our fruit descends, we can begin to try to create a soil type that mimics that of the forest. This is forest-edge ecology, where the soil is dominated by fungi, unlike the bacterially-dominated grass monoculture that we typically plant into. By using bulky, woodsy mulch, we not only begin to build soil from the top down, improving city soil which can be of poor quality, but we can create fungal dominance which will encourage beneficial, mutualistic relationships between the tree feeder roots and Mycorrhizal fungi. Mycorr is latin for fungi, and rhiza for root, literally translating as root fungus; they bind to the tree feeder roots and sometimes even penetrate into the root. In return for the carbohydrate-rich products of photosynthesis from the host, this incredible fungi spreads outwards as strands called hyphae, collectively known as mycelium. It is this mycelium that makes up the main, often unseen body of the fungal organism, the better known mushrooms and toadstools making up only the fruiting body which emerges when conditions are right for spore release. This beneficial relationship has the effect of expanding the root’s reach, enabling harder to find nutrients such as Phosphorous to be assimilated more easily, and the roots to share water and nutrients with other plants. This will play an increasingly important role as the trees are subject to droughts of increasing frequency. 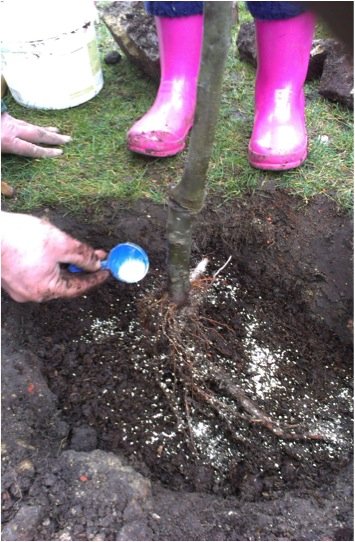 This winter we’ve been aiming to run some controlled experiments; looking at different mulch types and different ways of inoculating roots with mycorrhizal fungi for example. Various dips can now be bought into which you dip your roots before planting, or sprinkle onto the roots, to inoculate them with the spores of mycorrhizae to kick start the process. Some say these are an expensive gimmic. Others swear by them. So we decided there was only one way to find out – experiment for ourselves! So we’ve planted a few crudely controlled experiments – 2 of the same variety at the same site with same conditions, one with inoculation, one without **. We’ll monitor the growth rate and leaf quality of both in the coming years. 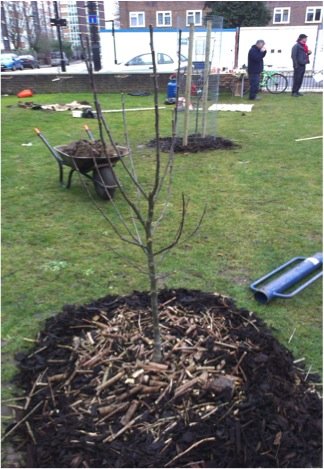 Two Howgate Wonder apples, one with ramial chipped wood and one with normal woodchip.

Another such experiment will be the use of ramial chipped wood (RCW) as mulch – which comprises of wood no larger in diameter than 3inches. Research from the Laval University, Quebec showed that this resulted in healthier trees and it’s use has been popularised with organic growers in the states by the fine work of orchard permaculturist Micheal Phillips, author of ‘The holistic Orchard’. This young wood has a higher proportion of living tissue – the cambium layer and buds – making it higher in nutrients. It contains lignin that has not been polymerised (hardened) and is therefore an easier feast to digest for our fungal allies, as well as providing food to other microbes and invertebrates, whose combined action all help to create a rich layer of long-lasting humus – the life force of soil. So, at the recently planted Wenlock Barn estate orchard for example, we planted two Howgate Wonders, one with bark mulch and one with RCW made up of young elder and sycamore, the former known to have particularly nutrient rich bark. We’re also looking at creating long-term system health of the orchards through the planting of beneficial guilds around each of the trees. Using this forest gardening approach, which seeks to maximise beneficial interconnections between plant species to mimic a young forest ecosystem, will help to ensure our orchards are low-input. We ran a course last summer for all our previous partner community groups called ‘Working with nature for a healthy orchard’ which included an introduction to beneficial guilds and we are encouraging them to experiment with their orchards. A community of insectory, pest-repelling, N-fixing and nutrient accumulating plants around the base of each tree, should help to negate the need for fossil fuel based pesticides and fertilisers. As many of these plants will be multi-purpose, additional yields may also be gained in the form of food and medicinal herbs. Combined with soil building and organic pest & disease control, this constitutes a holistic approach to long-term tree health. Additionally we’ll be carrying out some some joint research with Mark Riddill Smith from Vertical Veg about how best to grow top fruit in containers. Since 2009 we’ve concentrated on sites where trees can be planted directly into the ground, but for some urban communities bare ground is a luxury. Increased food security in the city will require fruit to be grown in containers on balconies and rooftops as well as from the ground. These trees may not be as long-lived, or productive but there will still be an important yield to be gained. We will aim to collate all of this information so that we can begin to build a picture of what works best here in London, which we can then make available to anyone wanting to plant urban orchards.  We’re also hoping to set up a tree nursery so that we can begin to propagate and sell varieties which respond well to organic methods here in the city. Building such knowledge won’t be without its challenges – 2012 has shown once more how unpredictable the weather is becoming. With an unprecedented warm spell in March resulting in early blossom, followed by the wettest April in 100 years, pollination activity was reduced leading to one of the poorest apple crops in living memory with up to half the UK’s expected crop being lost. This will make spotting meaningful patterns more difficult. But it also makes such work all the more important, and diversifying crops should help to ensure we keep seasonal and local organic fruit on the menu. * The pm editor loved the article but suggested we wait until we have results before publication – so I thought it’d make a good blog in the meantime ** Since carrying out the rootdip experiments it has been pointed out to me that the mycelium will surely travel from the inoculated tree to the control, placed 4-5m away. This seems pretty obvious and I’d totally overlooked it! One way to tighten up this control would be to place a barrier of some sort between the trees, although this could be difficult. However, although I don’t know how fast mycelium spreads, I imagine that it would be at least a year or two before it spreads far enough to reach the other tree (I’ll be looking into this), so we should see some differences within the first few years of growth.

Adapted from an article written for Permaculture magazine in 2012*