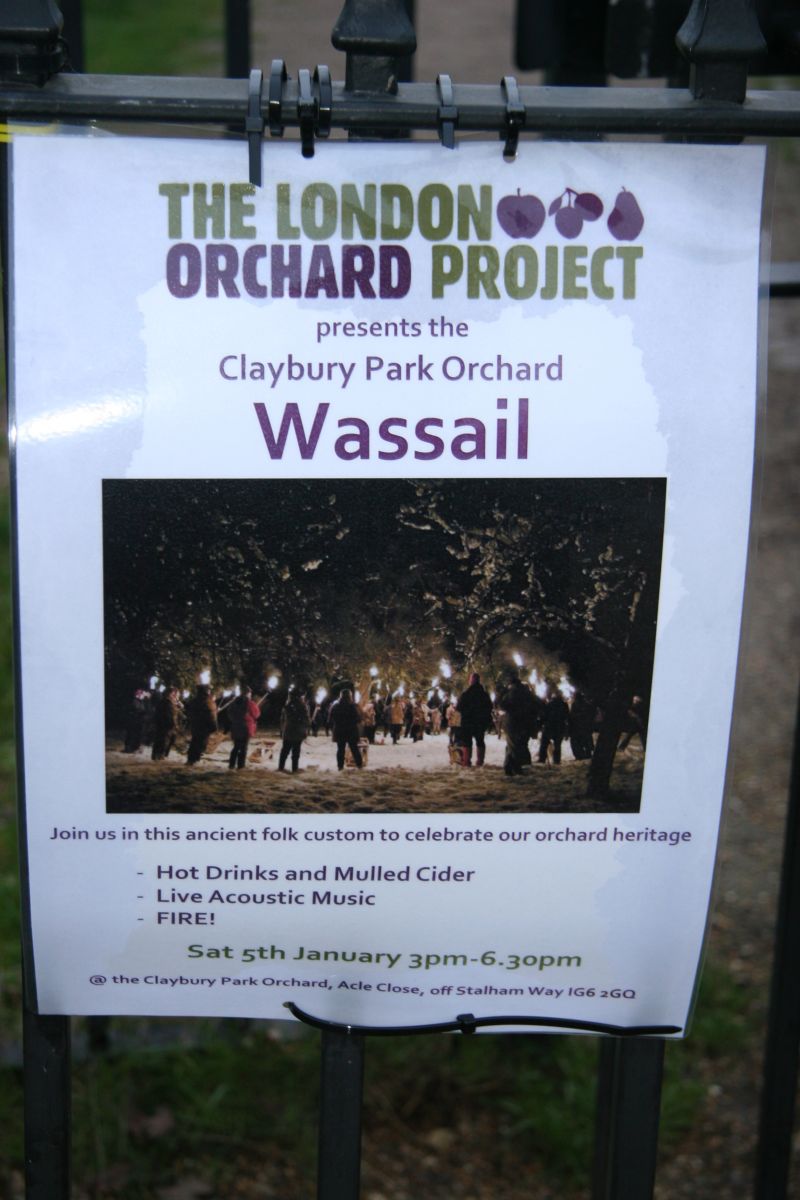 Wassailing is a traditional ceremony to promote a good harvest for the coming year. The orchard at Claybury Park woods dates back to the 1920s and 30s when the ground were associated with a psychiatric hospital. It is likely that the orchard was planted to help with patients therapy. In some cases orchards were established to help rehabilitate soldiers suffering from shell shock after WW1. There are quite a few orchards around London in the grounds of former hospitals. We are helping to restore another two of these, one in Bromley at Bethlem Royal Hospital and another at Horton Country Park. The well being benefits of working outside in nature seem obvious to us but it is taking policy makers some time to convince the government to invest in this as a preventive and therapeutic way on improving people’s health and wellbeing. See The New Ecomonics Foundation publication on Nature Solutions – “Nature’s role in delivering well-being and key policy goals – opportunities for the third sector” http://www.neweconomics.org/publications/natural-solutions, The London Orchard Project features as a case study. We helped restore the orchard at Claybury in Winter 2012 so it was great to be able to go back and wassail there.

We were led in our wassail by Mike Ruff, a folk musician and all round enthusiast in green man and ancient British celebrations. He brought Debs (on violin) with him who had made a particularly fetching rustic corset.

Watch a clip of Mike and Debs  here

We were also lucky to have our own GreenMan made for us by Eric Cooper, a fantastic artist. The GreenMan is a symbol of rebirth, or “renaissance”, representing the cycle of growth each spring. Ours was specially adapted to feature apples. It even has dried apple rings for hair. 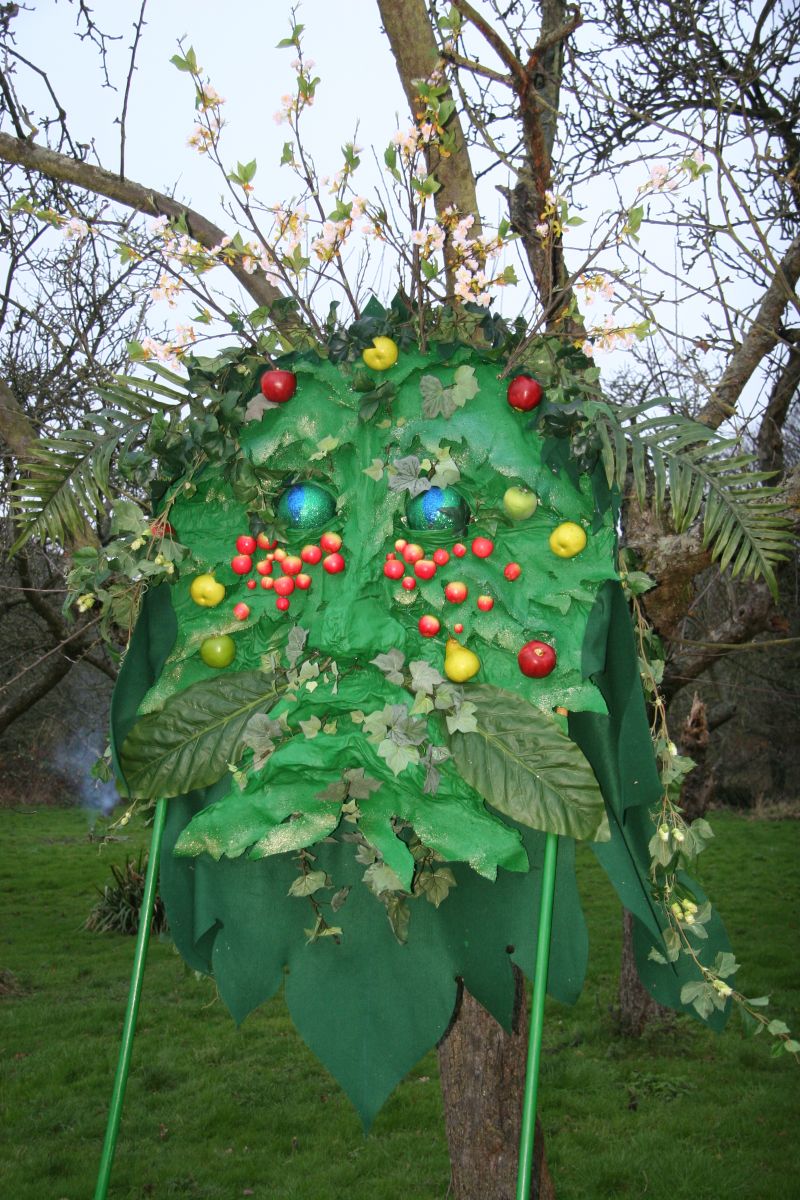 Wassailing has connections with Anglo-Saxon pagan ritual. The word Wassail (from the Anglo-Saxon toast Wæs þu hæl, “be thou hale”) means “be in good health”. Traditionally, the wassail is celebrated on Twelfth Night (the evening of January 5).

An old rhyme goes: “Wassaile the trees, that they may beare / You many a Plum and many a Peare: / For more or lesse fruits they will bring, / As you do give them Wassailing.” The purpose of wassailing is to awake the apple trees and to scare away evil spirits to ensure a good harvest of fruit in the Autumn. The ceremonies of each wassail vary around the country but they generally all have the same core elements. 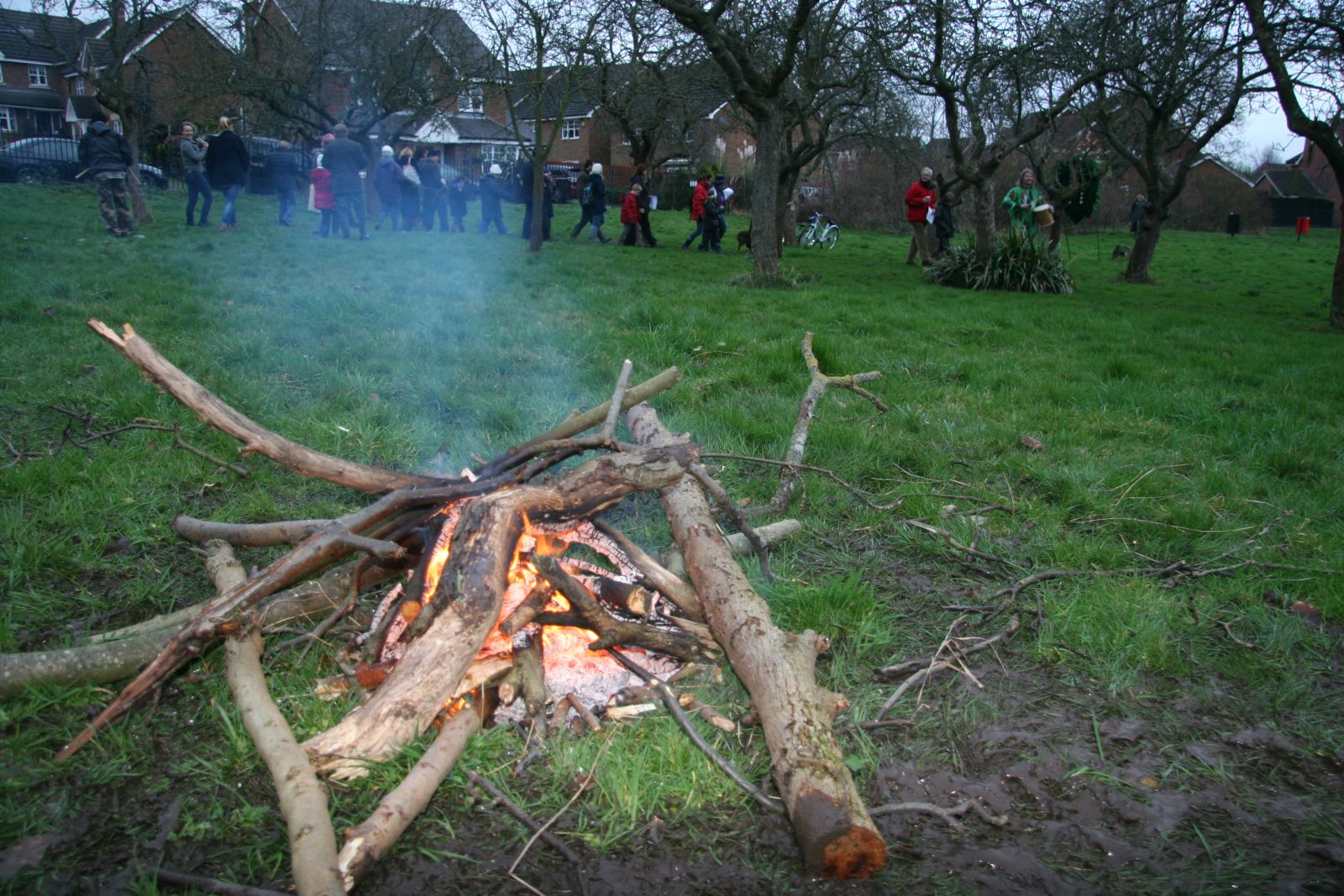 For our wassail, we processed around the orchard making lots of noise on pots and pans and drums to wake up the trees.  A wassail Queen and King were then chosen  from the children to place toast in the boughs of the oldest tree as a gift to the tree spirits (or possibly the robins!). We also poured cider on the roots of the tree.

Traditionally, people fired guns through the topmost branches and even tore the bark of the trees. We choose to skirt over this for the sake of the nearby residents. This practice could have had a practical purpose though, to dislodge insects from the trees, for example the woolly aphid, which overwinters in crevices in the bark.

Many people believed if the trees weren’t wassailed, there would be no apples. Considering last year’s abysmal harvest, it seems as though we didn’t wassail enough in 2012. Let’s hope this is remedied this year. 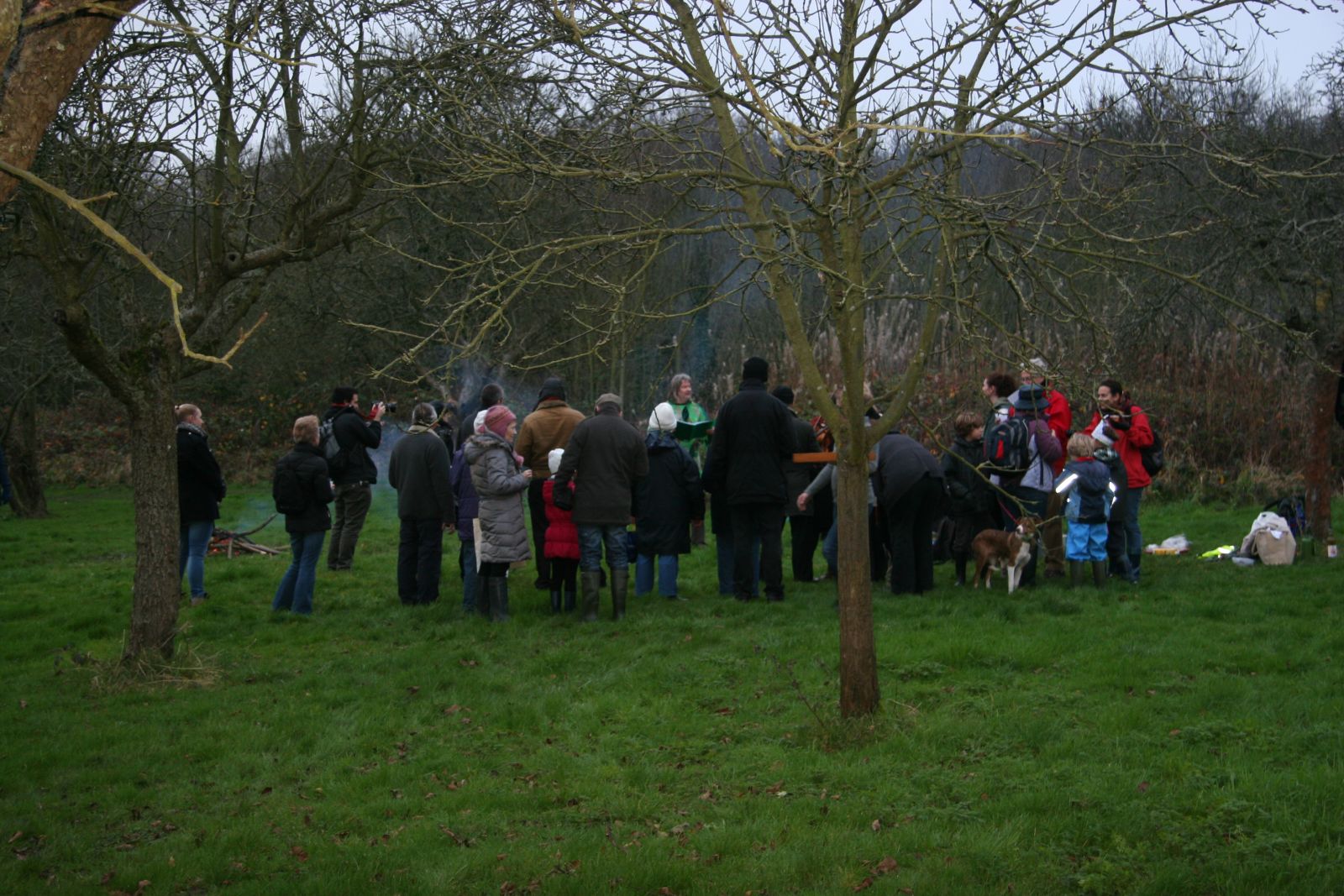 We sang lots of traditional wassailing songs around the orchard while drinking mulled cider and juice.  Including these ones:

Apple Tree Wassail (trad arr. Watersons) Chorus: (It’s) Our wassail jolly wassail! Joy come to our jolly wassail! How well they may bloom, how well they may bear So we may have apples and cider next year. Oliver Cromwell (traditional)  Oliver Cromwell is buried and dead Hee Haw buried and dead There grew an old apple tree over his head Hee Haw over his head  The apples are ripe and ready to fall Hee Haw ready to fall There came and old woman to gather them all Hee Haw gather them all Oliver rose and gave her a drop Hee Haw gave her a drop Which made the old woman go hippity hop Hee Haw Hippity hop The saddle and bridle they lie on the shelf Hee Haw lie on the shelf If you want any more you can sing it yourself Hee Haw sing it yourself 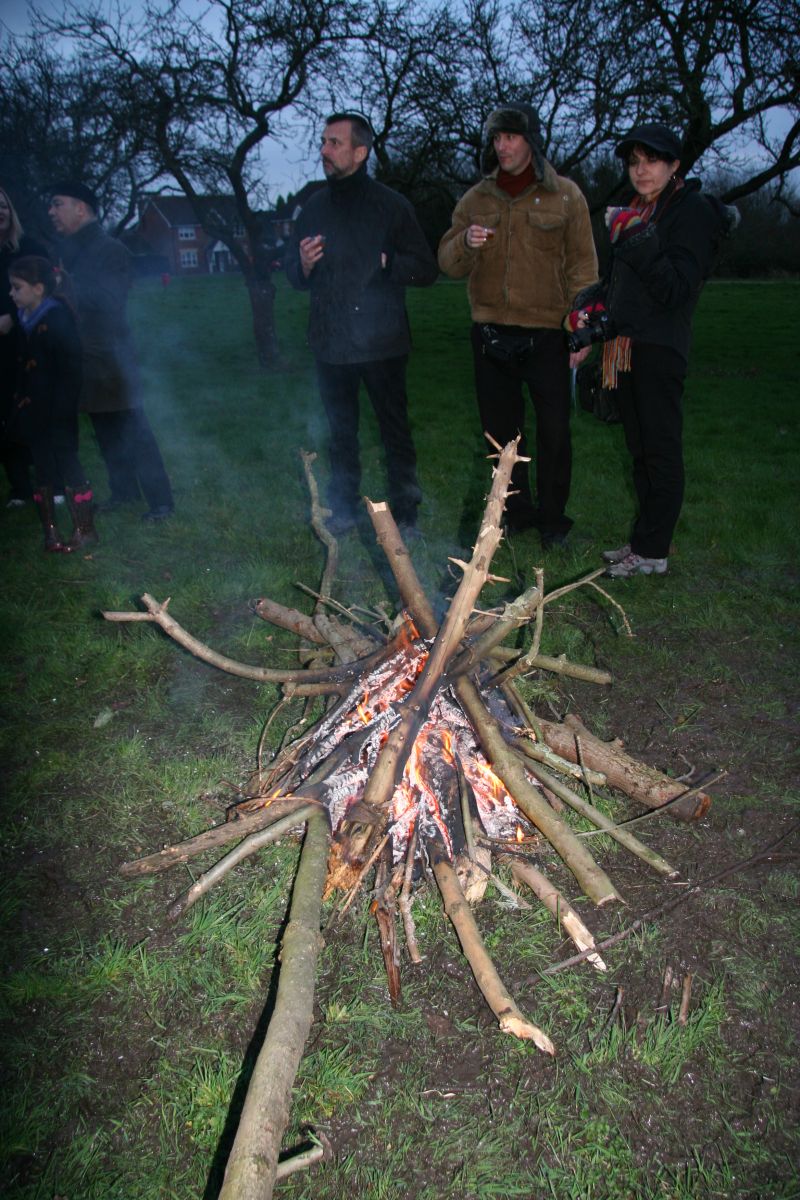 Then the night fell, as we enjoyed the last of the mulled cider. Some people even brought their own home brewed, including some from our friends at London Glider Cider and a very delicious chewy cider made by the Hounslow Cider Cooperative. We are hoping to have another wassail at Alara Wholefoods permaculture orchard on the 22nd Feb 2013, see you there maybe!