Home » Blog » Where do apples come from?

Harvest season is over and now we can eat, bake, preserve and generally enjoy the fruits of our collective labour. But when you take a bite of an apple do you ever stop to ask – where did apples originate from? And how did they end up here in Britain?

Where did apples originate from?

There are a whopping 2,170 English cultivated varieties of apple, and all of these have been specially selected and grown for their desirable properties such as size, taste and texture. The modern apples that we find in the shops or grow in our orchards all fall under the collective grouping of Latin name: Malus domestica. 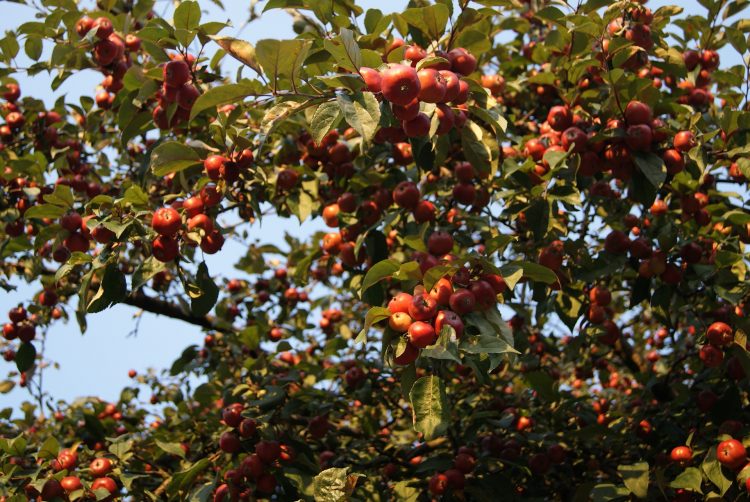 In 1929, Russian scientist Nikolai Vavilov first traced the apple genome. He identified the primary ancestor of most cultivars of the domesticated apple to be the ancient apple tree: Malus sieversii. There used to be some controversy over this, but it has since been confirmed, through detailed DNA testing, and a full sequencing of the genome, as recently as 2010.

Malus sieversii is a wild apple, native to Central Asia, specifically to the Tian Shan Mountains of Kazakhstan, where they have been growing over millions of years and where they can still be found fruiting today. The original wild apples grew in ‘apple forests’ at the foot of the snow-tipped mountains and spread over miles and miles. The fruits would have been all different shapes and sizes and a huge variety of tastes (though the majority were not very palatable).

Kazakhstan is hugely proud of its fruity history. The city of Almaty, where these apple forests are found, claimed the honour of ‘birth place of the apple’ about 100 years ago. Almaty is the second biggest city in Kazakhastan (it used to be the capital) and this title is not a totally new accolade. Looking back hundreds of years, its name ‘Almaty’ was previously recorded as ‘Alma-Ata’ which translates from Kazakh as ‘Father of the Apples’.

So our apples’ ancestors originated in the wild apple forests in the Tian Shan Mountains of Kazakhstan, but how did they get to Britain? 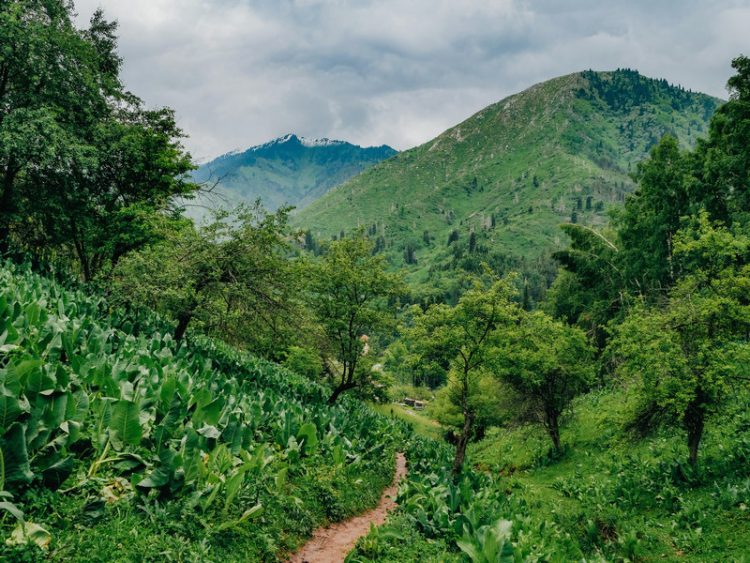 Photo of wild apple trees and mountains in Almaty, by Cynthia & Niko www.journalofnomads.com

How did they end up here in Britain?

Well you may have heard it asked, what did the Romans ever do for us? I mean apart from the sanitation, the medicine, education, wine, public order, irrigation, roads, a fresh water system, and public health, what have the Romans really ever done for us? Well, here’s a big one – they brought us apples.

Scientists believe that birds and bears would have transported apple seeds out of Kazakhstan long before humans started to cultivate them – by eating the apples and then pooping out the seeds. The Romans discovered apples growing in Syria and were central in dispersing them around the world from there, using the Silk Road as a means of transport from East to West.

The Romans practiced the skill of grafting – selectively breeding apples they wanted, based on their size and taste. Grafting is the incredible process of taking a cutting from your chosen apple variety and attaching it on to a rootstock (young roots and trunk) from another tree. This is necessary as apple trees grown from seed will not grow true to their parent fruit. It is a skill still used for almost all apple trees grown today (with The Orchard Project running a series of popular grafting workshops each year).

As such, the Romans started to grow apples in Britain that were bigger, sweeter, and tastier than any before. And for that we thank them!

So there we have it, the ancestors of apples as we know them today come from Kazakhstan. They spread naturally to Syria, where the Romans picked them up and travelled along the Silk Road to bring them East. They learnt to graft, and started to cultivate apples similar to the ones we know and enjoy today.

As well as a fascinating story, this piece of history could be useful today. Climate crisis is creating a challenging environment for food growing, and our current apples, Malus domestica, may struggle. Some recent breeding programmes have looked to their ancestors, Malus sieversii, to develop apples more suitable for colder and wetter growing conditions.

Now there’s some food for thought as you take a bite of that Golden Delicious!