Home » Blog » We are all apples

As a bit of a forest gardening eager beaver, I’ve been reading some back issues of Agroforestry News. One article from 2015 caught my eye: ‘Tackling green xenophobia’. It’s also published here. In it, veteran eco journalist Fred Pearce argues that the risks of invasive non-native species is often overstated and that these plants can end up benefiting the overall ecosystem. He points out that some natives are invasive, e.g. bracken and bramble. Obviously he covers much more territory in his book, The New Wild, but it struck me that this very spicy topic is just as relevant now as it was seven years ago.

At The Orchard Project, we are often asked about including native plants in orchards as if native plants are inherently ‘good’. In some ways they are. Generally speaking, the longer a plant has resided in one area, the greater the number of associated organisms. That’s just how evolution works. Plants and their associated fauna are constantly adapting to triumph with and over each other. A good example of this is oak which has over 300 species of invertebrates, bryophytes and fungi dependent on them. However, not all native plants support huge wildlife populations. Yew trees, for example, have hardly any associated invertebrates and fungi.

As greedy humans hoping for high yields from a plant, loads of associated species isn’t necessarily a good thing. We don’t want loads of insect larvae nibbling our leaves or fungi living off our fruit. That’s when we start calling things ‘pests and diseases’ instead of just ‘wildlife’. So-called non-natives and hybrid cultivars are often what we want because they are vigorous and productive with fewer associated pests and diseases. And that’s not to say they are no good for wildlife. Witness the bees clambering all over the flowers of the Zanthoxlum alatum – growing in London but hailing from eastern Asia.

In any case, without the so called non-natives, our orchards would be pretty impoverished. Our canopy harvest would just contain crab apples, cherries, hawthorns, plums, rowanberries, strawberry tree fruit, hazelnuts and acorns. Although these are all wonderfully edible, our ancestors wisely brought in additional plants. Plants like apples, pears and sweet chestnuts all have large fruit and nuts. All are fantastic sources of food for us and for wildlife and we are better off with them.

What does native even mean?

The native-ness of plants is an arbitrary construct which isn’t always that helpful. In fact, could plant native-ness be just as unhelpful as people native-ness? Perhaps we should challenge our perception of what an orchard (or a society) ‘should’ look like. For example, many people think and orchard should be rows of trees with grass underneath. In the past such an orchard would have have been under-grazed by animals. It met our needs at that particular point in time.

American permaculturalist Toby Hemenway argues that Americans should see corn as the most invasive plant because of how much land it takes up. It’s all about the way we look at things rather than what is ‘right’. He goes on to explain how plants are opportunistic:

“Unwanted species generally arrive because humans have changed the environment to make conditions more favourable for the new species. And when we ‘restore’ landscapes, or more often, introduce a set of species that we have decided are the ones we want to see there, we are altering the landscapes to suit our ideas of what should be there, not to match some divine plan.”

We humans have always managed land in a way that will suit our ever-changing needs, not to achieve a vision of what a ‘traditional’ orchard looks like.

As covered in this blog we find that aiming for inclusive plant polycultures creates more resilient orchards. Orchards that include a range of plants create niches for biodiversity, complex interconnections at a soil level and more stable growing conditions.  All of this leads to greater plant health and higher yields. We’re aspiring towards more complex and harmonious plant communities, rather than monocultures.

We are doing some equality diversity and inclusion work with Judy from the Black Environment Network. We are working our way through a series of themed conversations with homework reading before each. So far we have seen some fascinating films and read inspiring articles.  Our work with Judy ties in with some our other attempts, covered in this blog, to make our organisation more inclusive.

One of the recurring themes is the idea of valuing difference in people and also finding the similarities. Today’s conversation was no exception. Judy pointed out that humans share 99.9% of the same genetic material and that we are all the same race. We tend to focus on some of the genetic expressions that come out in skin colour. These traits show ancient pathway back to the physical location of some of our ancestors, but beyond that we learn very little from it. In plant terms we’re all apples we’re all the same Genus and the same species but we’re different varieties. 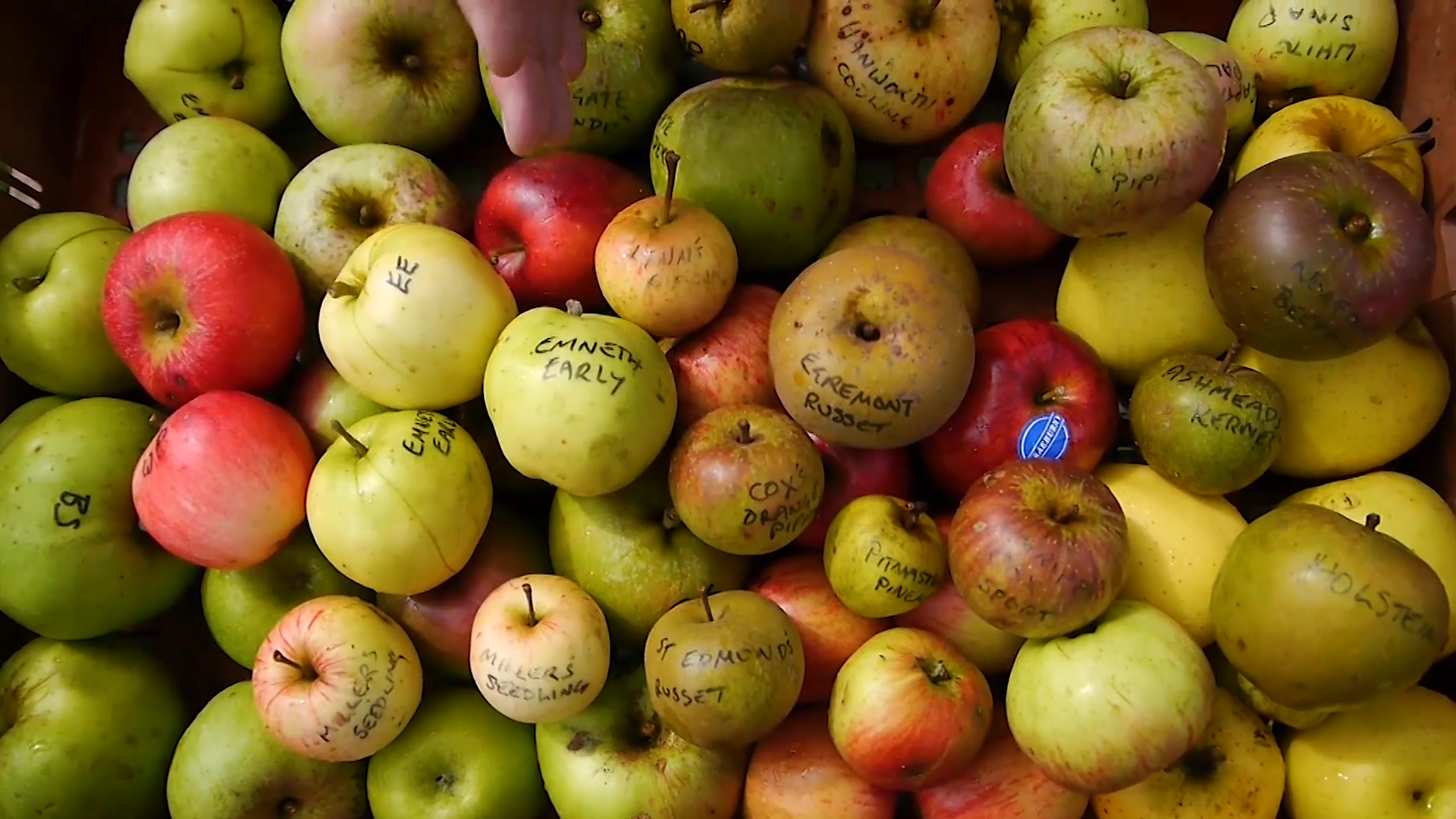 I might be a ‘Merton Russet’ and you might be a ‘Gala’ but we are all the same fruit species, individually expressed. Our texture, our flavour our flowering time and whether we make great cider, all these will be massively variable. You can’t assume that all striped apples will share the same characteristics any more than you can predict a human’s characteristics based on skin colour. Our genetic make up is more complicated than that and the idea that there are distinct human ‘races’ has been completely debunked.

We all belong in orchards

There is a lovely parallel between orchards and the communities they serve. Plant polycultures are the perfect example of the kind of thriving and inter-connected human society we want to see. So let’s celebrate the diversity of orchards and see if they can help us move towards the harmonious world we dream of. Here’s to lots of blossom picnics, harvest festivals and pruning parties in orchards that reflect the beating heart of our communities.