Summer is well and truly upon us. Beating down on us here in London in fact.

Parks, commons and verges the city over are parched; yellowed grass barely concealing the cracked, dusty earth beneath, with the ground in some places resembling dried up river basins.

And it’s not looking good for the UK’s commercial growers: the driest UK winter in 20 years combined with a late frost in April and an ongoing lack of rain (particularly in the SE) has smashed the UK’s top fruit crop. These can be challenging times for young fruit trees trying to find their feet in the big city. Establishment can take longer here, so the more TLC you can afford to give the trees in the first few years after planting, the bigger the impact.

Studies have shown that the mortality of urban landscape trees frequently reaches 30% in the first year after planting, sometimes rising to 70%, with lack of water and sub-optimal soils usually to blame. Insufficient soil moisture and soil compaction are the two biggest limiting factors to root growth and indeed both are interrelated.

Trees planted into poor soil with little planning for aftercare is a scenario played out all too often; the biology of living trees is disregarded and the resulting waste of both time and resources can breed local resentment towards Local Authorities, making them sceptical of future tree planting schemes.

Watering is even more important in compacted soils as the root system may already be slow-growing due to ‘mechanical resistance’; as new roots have to force their way through tiny pore spaces.

Some trees adapt to drought by decreasing shoot growth while maintaining root growth to increase the root to shoot ratio in order to maximise water uptake and decrease transpiration (loss of water through the leaf pores).  Roots may also grow downwards, away from the dried out surface layers, but, when urban soils limit rooting depth (eg a shallow layer of soil on top of rubble), the ability of tree roots to respond to periods of drought is further limited.

This is where mulch comes into its own, dealing with these issues in multiple ways; as a regulator of fluctuations in soil moisture and temperature; by creating more water-holding humus through the addition of organic matter, and the associated action of increased populations of soil biota. When out and about visiting some London orchards last week, I stuck my fingers deep into a thick layer of mulch we’d applied last winter; it was cool and moist and riddled with fungal mycelium. I assumed that the group had recently watered, but when I asked them, they sheepishly admitted that they hadn’t watered for weeks! The mulch was clearly doing its job.

Cool, moist and mycellial: a thick layer of mulch doing it’s job after weeks of no rain or watering

Root inoculation with mycorrhizal dips should also help to speed up the process of establishment as the network of fungal hyphae stretch far and wide, penetrating pore spaces too fine for the finest of root tips and transporting water back to the host tree (although the scientific literature is still unclear on the benefits of this myco-inoculation, small scale experiments seem to show clear results).

Planting deep rooted plants such as comfrey can also help to break up compacted soils by creating new channels and attracting microbial activity in the rhizosphere which in turn attract larger organisms such as worms which work on improving structure.

So, if your trees were planted last winter you should be watering weekly, we recommend a good 20 litre soaking per tree per week. If they’ve been in for longer and are established, it’s still important to help them through these dry times with a good soaking here and there. In order to get the maximum tree benefit for your effort, ensure you pour the water slowly to allow penetration, and focus where the most of the absorbing roots can be found.  Forest, ornamental and fruit trees tend to distribute their roots in a wide circle with the ‘feeder’ roots occupying a ‘drip zone’ – an area beyond the leaf canopy to which rain is deposited from the foliage above. Focus water and feed here. Watering in the cooler evenings will ensure optimum uptake.

In the first two years aim to soak your whole mulch area to ensure the whole root system, reduced in size by the nursery, has access to the water as well as encouraging the outward growth of new absorbing roots towards the edge of the mulch ring (roots can only grow where there is sufficient moisture – they can’t grow through dry soil towards a water source). In subsequent years, focus any watering and feeding around the drip line as this is where the absorbing roots will lie; there’s little point in watering and feeding the woody ‘secondary’ growth around the base of the trunk. 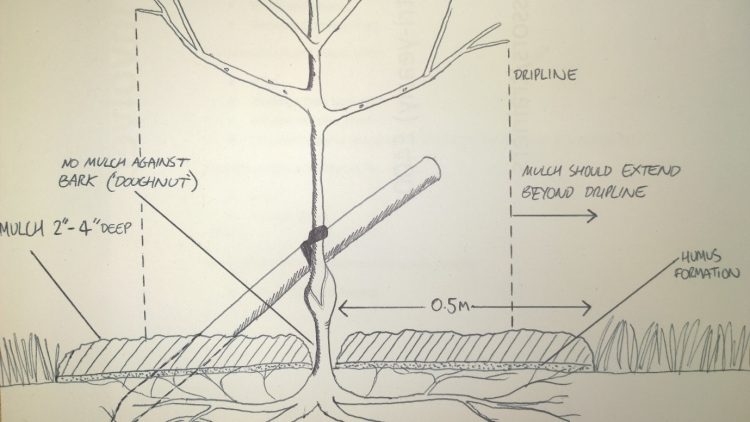 All too often watering gets neglected as moving around large volumes can be hard, sweaty work in the sun and people don’t fully appreciate the needs of young trees. Finding ways to make this less of a slog can make all the difference.

One great little invention is the H2go; an 80l water bag designed to sit in a wheel barrow where it can be filled up and emptied through a spout by simply tilting the barrow forward. That’s up to four trees in one journey. Using a couple these, two people could water a whole orchard sufficiently in little time. 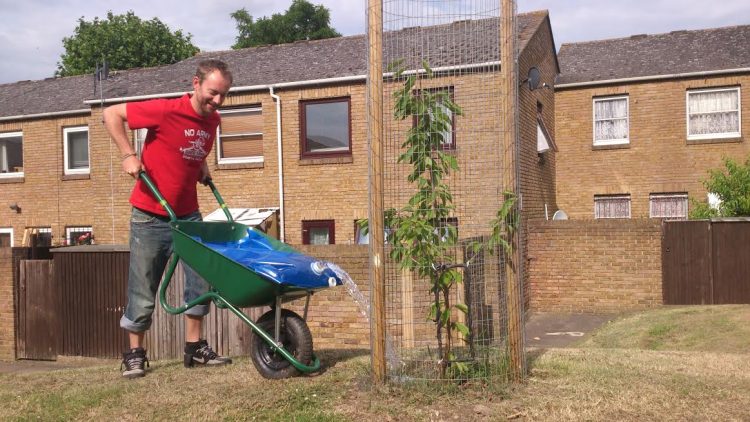 The handy ‘H2go’ in action on a parched cherry

So, we’d love to hear how groups are tackling their watering. In particular, we’re keen to see successful rain water collection set ups in public spaces, and how park groups get water to their trees when they’re planted far from a tap. Please share your ideas on our Twitter and/or Facebook, or email lewis@theorchardproject.org. 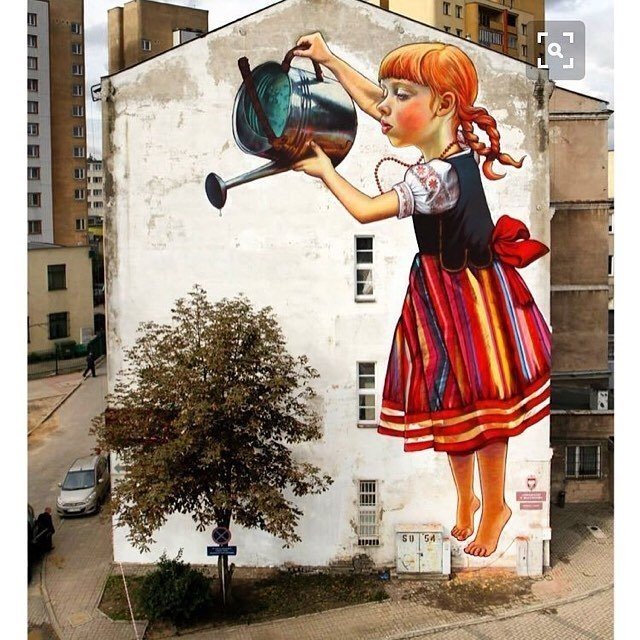