We were lucky to learn the art of Summer Pruning from two orchard experts: Jim Arbury at RHS Wisley let us try our secateurs on their magnificent trained pears and Bob Lever ran a workshop for us at Fryent Country Park in Brent. Read on to find some of the tips we picked up.

Lucy, Amber, Lewis and Merrin in the trained fruit section at Wisley 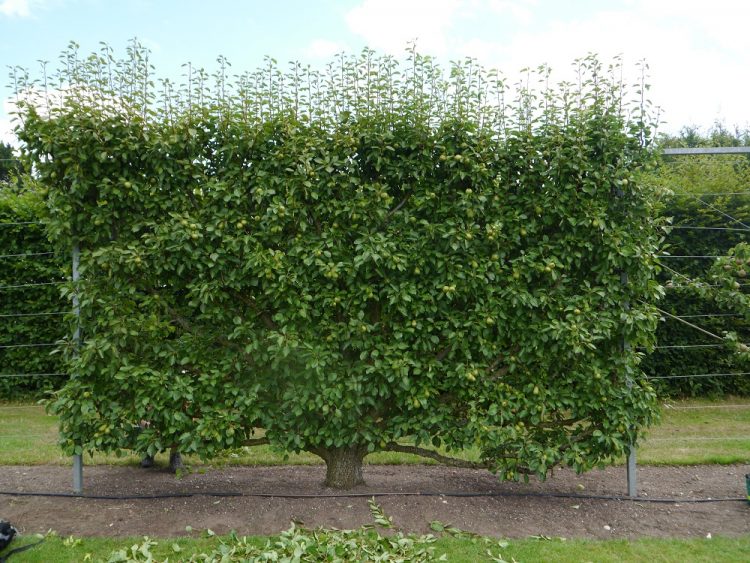 Magnificent old pear – where’s a ladder to do the top?

Summer pruning increases the light available to developing fruit, leading to greater size and improved colour and sugar content. Summer pruning can also encourage fruit buds to form, leading to greater yield in the following year. Importantly for trained forms like espaliers or fan-shaped trees, summer pruning reduces vigour which helps with keeping the tree in its restricted form. It is important only to prune stone fruits like plums, cherries and apricots in the warmer months between May and July, as outside these times the fungal disease ‘silver leaf’ is prevalent.

The pruning system commonly used in Britain and explained below is known as a modified Lorette system. Wait until the base of new shoots have turned woody and growth has slowed (in the South-East this should be around mid-August and later further North). Shoots will be darker in colour and less bendy and you will notice terminal bud forms on the ends. 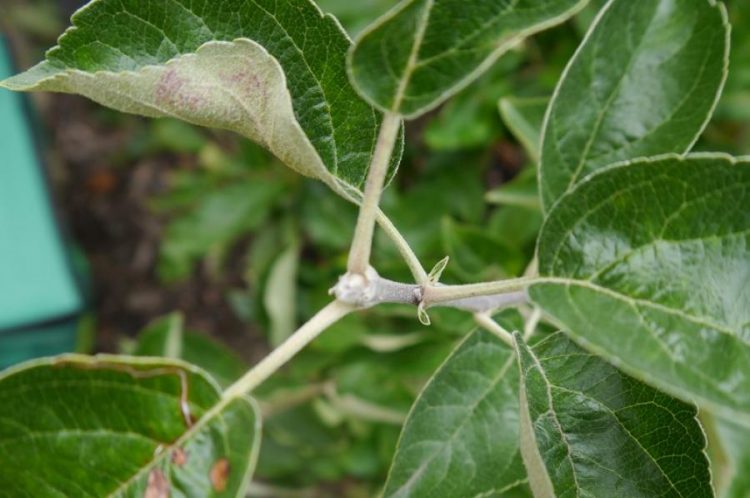 The horizontal framework branches will have lots of new spring growth coming off them, which all needs to be shortened to allow light in. New shoots coming straight off the main branch (laterals) should be cut back to three leaves above the basal cluster (the closely packed set of leaves right at the base of the shoot). Any shoots growing from these laterals (sub-laterals) should be cut back to one leaf. 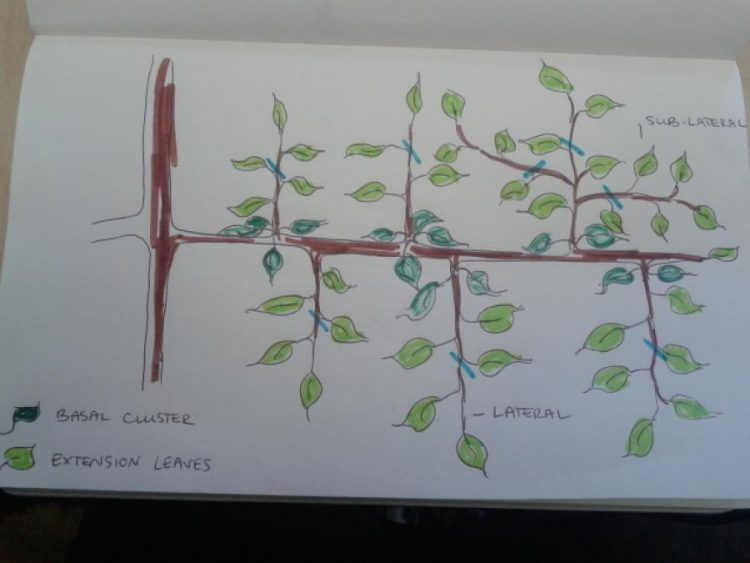 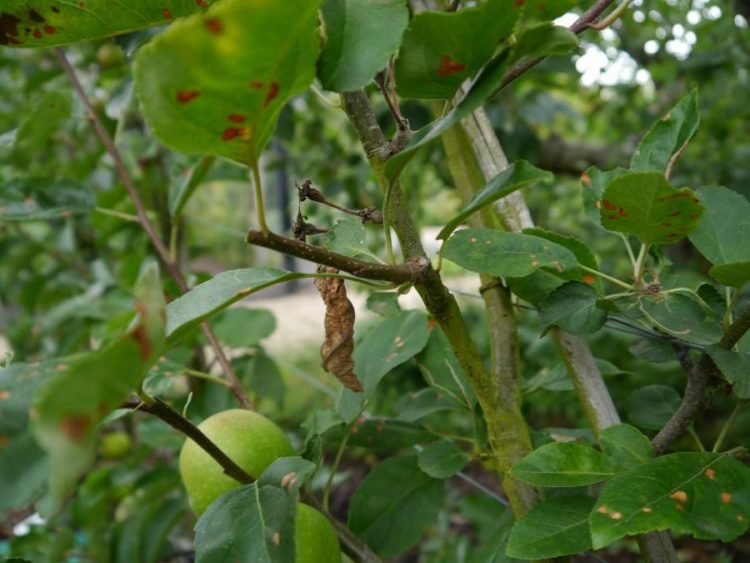 Cut back to one leaf on a sub-lateral

Shoots that are shorter than your secateurs (about 9 inches) should be left on, as they are likely to have fruit buds on them. 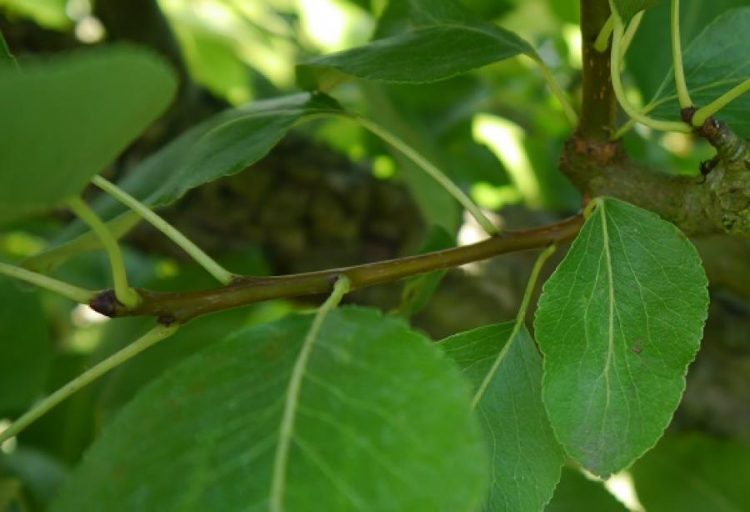 The stem has hardened up but it’s too short – leave it for next year.

The ends of the main branches should be tied in to prevent them growing upwards – while still growing tie them loosely at an angle – and tie in horizontal once the growth has stopped. This is to ensure the growing shoot draws up enough hormones to create a strong branch.

Prune all side shoots to 2-3 leaves and once the leader reaches 6 feet, prune it to one leaf from the start of the new growth to keep the tree within easy reach for harvesting. 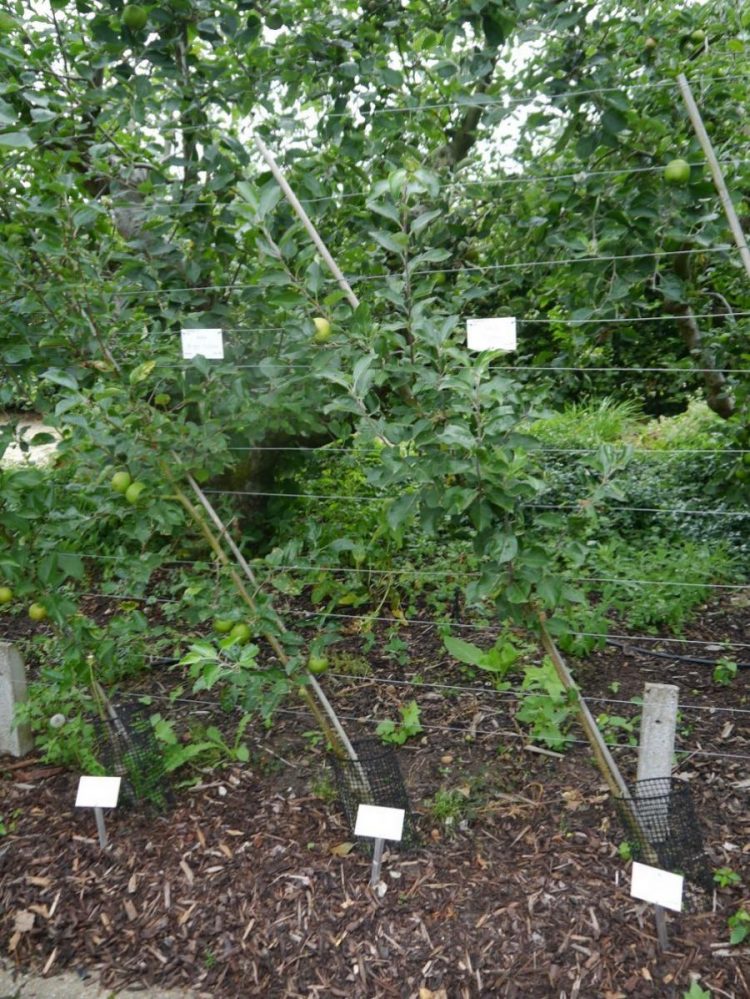 In June, tie in any suitable shoots if there is room in the framework. Cut back remaining new shoots to 6 leaves from the basal cluster. Any misplaced or damaged shoots may be cut out altogether. After fruiting in the summer, cut shoots again back to 3 leaves. This will help to create a spur that will bear fruit next year. 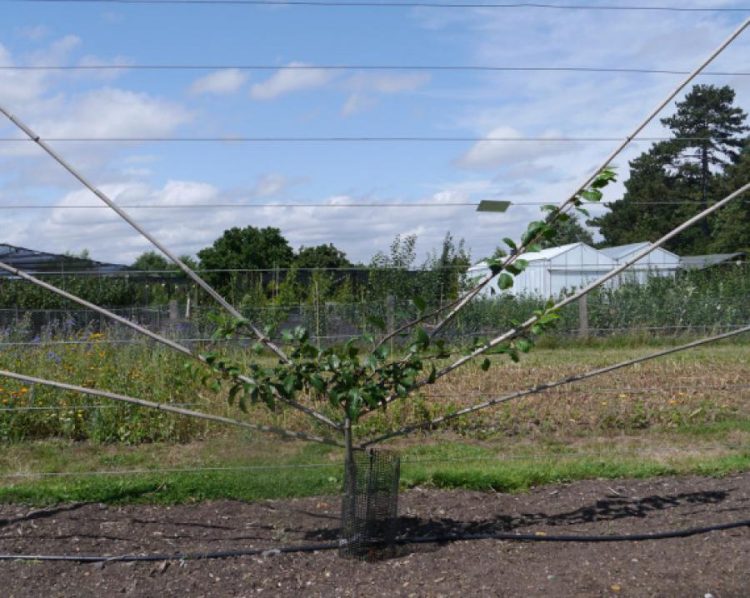 These notes refer to renewal pruning, which is the system used by commercial orchards and is relatively simple to master. A tree is grown with 4-5 permanent structural branches which then produce side shoots. These are left untouched for around four years and then cut out entirely and replaced by new shoots. This is based on the premise that the wood in fruit trees is most fruitful for up to five years. Apple and pear trees should have the main restorative or structural pruning done in the winter when the tree is bare and the shape is easier to see. At that time of year it is also easier to distinguish between fruit and leaf buds and avoid cutting off too much productive wood.

Pruning in summer helps restrict unwanted and excessive growth that occurs after winter pruning and aids with current and future year’s fruit production. Apples and pears that were pruned to an open-centred form the previous winter have put out lots of young new growth that needs cutting out to allow air and light into the ripening fruit. If you were overly enthusiastic with your pruning last year you may have lots of these upright shoots – thin them out to 3 or so, looking to retain any that are less upright which may be encouraged to more open, downward growth. 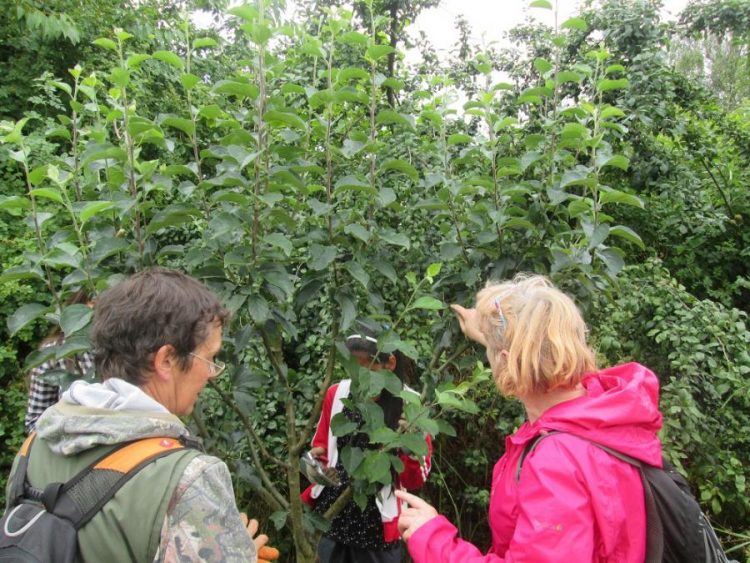 Prune no more than 20% of the tree’s wood and focus on upright, vigorous shoots, crossing branches or damaged/diseased wood. As with this tree, below you may only require a few cuts. 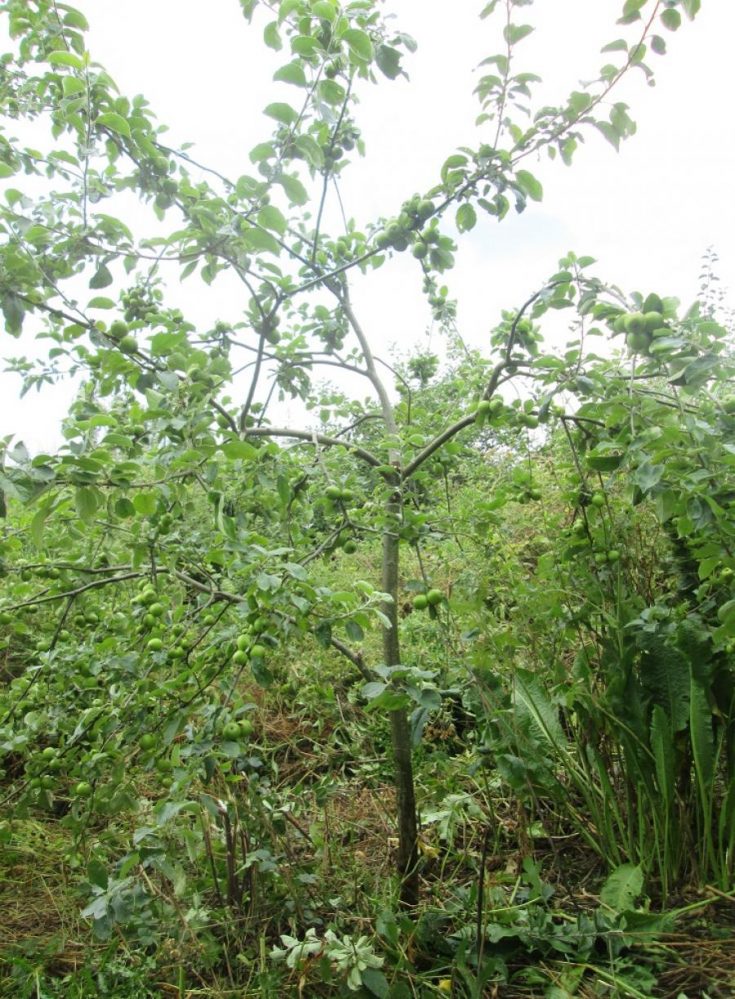 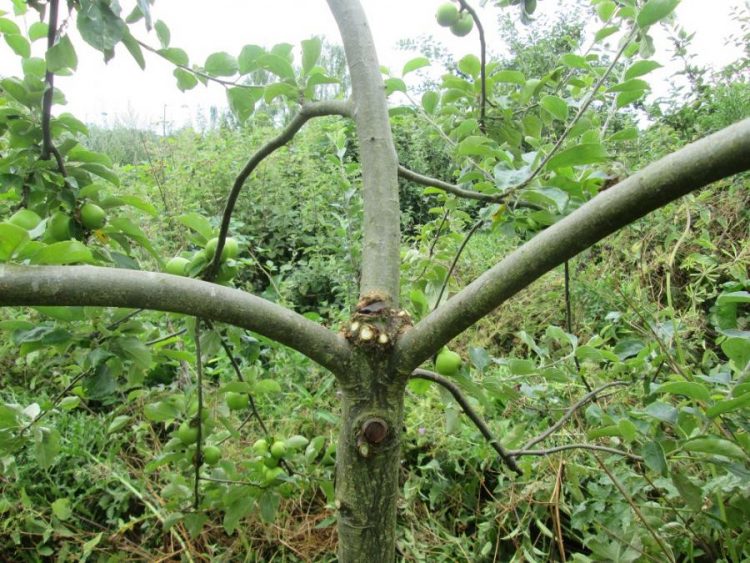 If there are shoots growing from below your main framework branches, these can be pruned out as well. 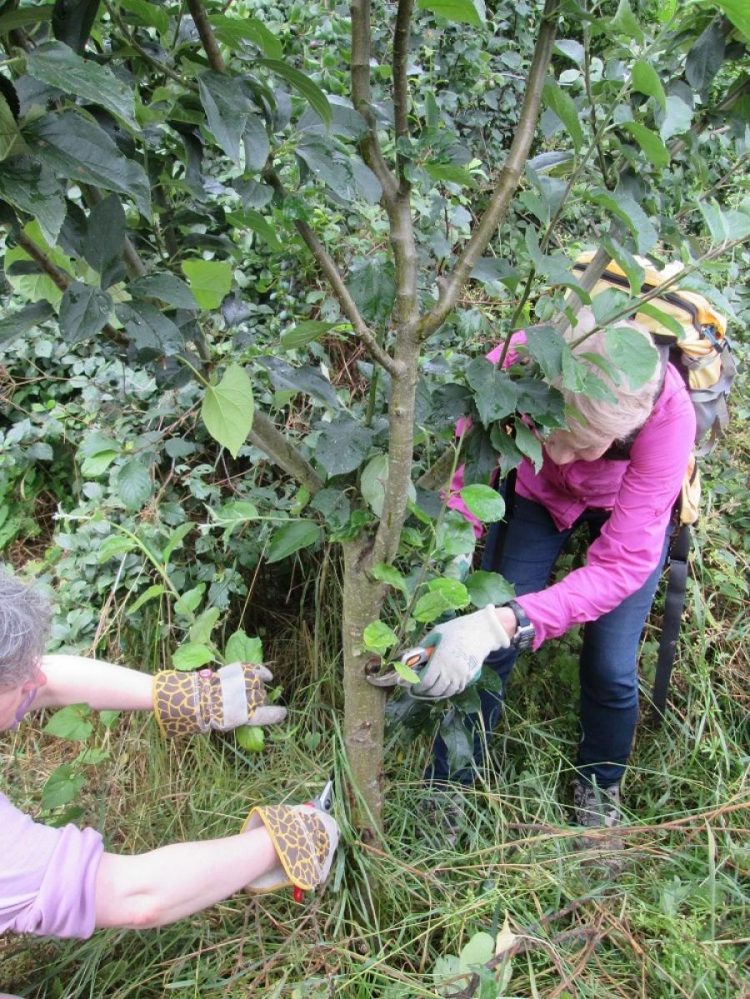 Plum trees have a more congested growth habit and branches that naturally tend to droop downwards. Less pruning is required and should be focused on keeping the tree to a manageable size, reducing the worst branch congestion and removing any damaged or diseased wood. Any branches that have grown straight up with no sign of curving down can be taken out at the base. Then cut back any over-extended branches or those trailing on the ground to a side shoot or a fruit. Cutting back to where there is fruit will help slow down renewed extension growth as the tree will direct hormones to the fruit. 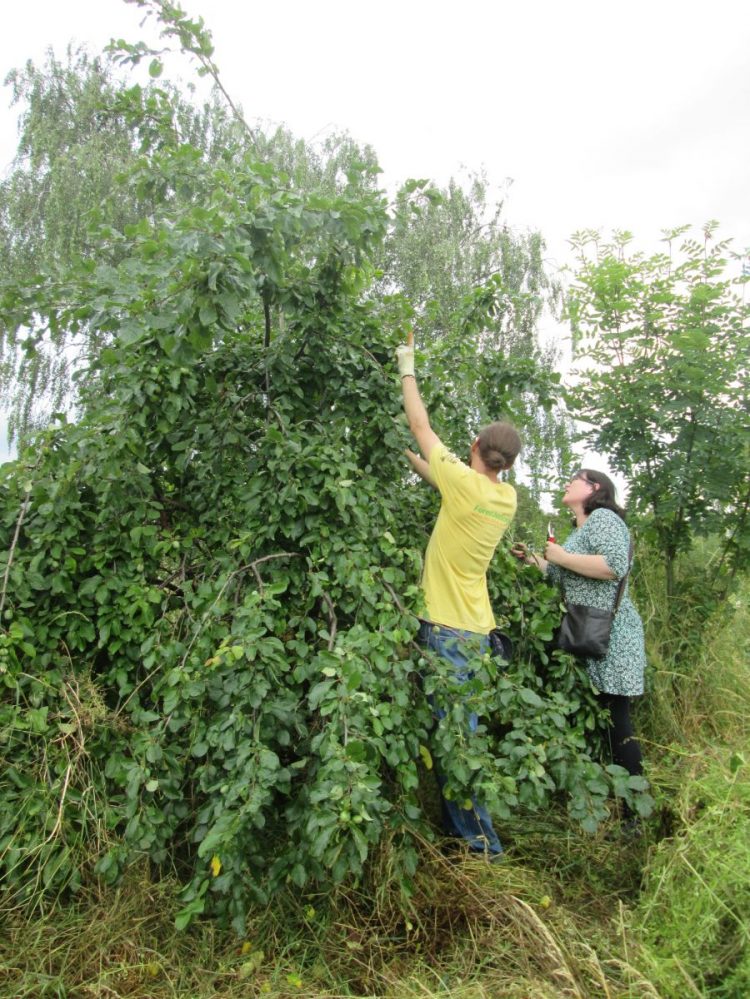 The upright branch towering over this plum tree will be cut out and the low hanging branches taken back to a side branch or fruit.Note: When cutting larger branches with a saw, be particularly careful to do it in stages and use an undercut if needed – the bark is greener in summer and will tear more easily!

Inspired to read more? Have a look at these sites for more photos and user-friendly explanations: