“The lads thought chives only came in Pringles crisps!” says John, as we share a hearty lunch of curried lentil soup, chips and cheese rolls, – the same food the prisoners will be tucking into in another building nearby. John works at Thorn Cross (HMP) prison in Cheshire. He’s been supporting the prison’s horticultural training programme for prisoners for many years now, including helping to care for an on-site orchard. I’ve come to assist my colleague with a pruning training session, teaching the prisoners how to care for the eight-year old Bramleys, as well as Mulberry, plum and other apple and pear varieties. 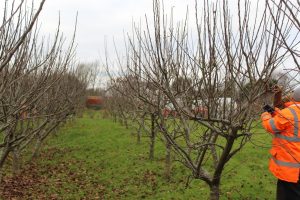 The orchard at Thorn Cross HMP

Thorn Cross is an impressive site with much more greenery than I would have expected for a Category D prison and Young Offenders Institute. Within its extensive grounds, we pass a nature reserve area, a small wetland with several ponds, a large poultry enclosure, a poly-tunnel  and vegetable beds (whose produce supplement the prison’s kitchen supplies) and, of course, the orchard.  There are more than 300 chickens living here, – all looked after by the inmates. One section of the grounds even resembles a tree nursery, with saplings being grown and nurtured to provide hedging along the outer perimeters, both here and at other prisons.

Many of the 300+ male prisoners living here get involved with horticultural and ground maintenance activities.  Aged between 18 and 25, they must have two years or less left remaining on their sentences to be admitted. During their time inside at Thorn Cross, the young men chose a learning pathway. The range of subjects on offer includes construction, recycling, railway construction, catering, brick-laying, plastering and horticulture. This is where The Orchard Project comes in.

Our partnership with the Ministry of Justice (MoJ) is part of its plan to utilise its position as the second-largest landholder in government to address nature recovery. The MoJ recognises the benefits of nature and green-spaces and hopes to bring these qualities to its prison environments across Her Majesty’s Prison and Probation Service (HMPPS). Our brilliant team of orchard experts have been working hard to help the MoJ reach its goal of having a well-maintained orchard in every prison across England and Wales (more info here). 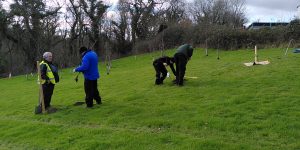 But gardening and orchard care are relatively alien pursuits for most of the newcomers at Thorn Cross. Alex Boscarino, the site’s Land-Based Manager, explains: “They’ve never seen how a plant grows. They might not even recognise a tomato or strawberry plant, because they’ve only ever seen them in packets in the supermarkets”. He reveals that, for many, their prior experience of plant-care tends to come from growing Cannabis.

“This is like a hobby for me”, says Paul*, “I used to help my Grandma with her garden since I was young.”

So is it difficult to engage the prisoners, I ask? “Some of them really get into it,” says John. And as I chat to some of the prisoners later on, with the taller men assisting me to reach the higher boughs of an apple tree, one or two begin to spontaneously share memories of gardens and fruit trees they have known in the past. 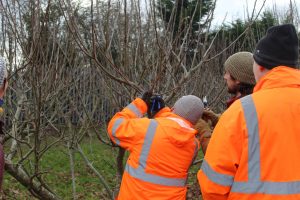 Sadly the UK’s prison system has one of the highest rates of reoffending in Europe, and Thorn Cross, even with a strong track record, is not entirely exempt from this problem. Our Project Managers certainly have some unusual requirements to take into account when designing the prison orchards, – avoiding planting trees close to the perimeter fence for example (to reduce the risk of attempted escape). So what about the long-term impact of exposure to horticulture for these young men?  The orchard training seems to be benefiting the mental state of both staff and prisoners during their stay which I was able to observe on the day:

“When they are focused on the welfare of another living being, they aren’t thinking about themselves or their problems,” explains Alex; “It gives them a sense of accomplishment too”.

He believes that they are learning a “real skill”, which contributes to their motivation and confidence levels when it comes to taking on off-site work placements. All of these steps are designed to prepare the men for life outside upon release.

Observing Sam* with his loppers, even three hours after meeting him, I can certainly see a change in this prisoner’s physiological sate. He has the eager energy of someone who is totally immersed in their task, – single-minded, calm and focused entirely on the tree in front of him. He even seems reluctant to pass the tool to anyone else; I can recognise in him a feeling I’ve experienced myself when pruning, – a healthy addiction to the satisfaction that comes from a clean cut. 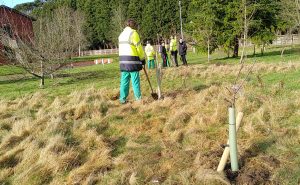 Training the staff in orchard care at Leyhill prison 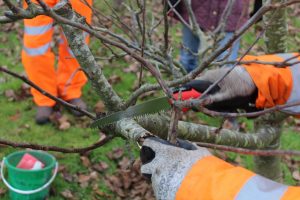 Prisoners at Thorn Cross get immersed in pruning

Thorn Cross HMP was the runner-up in the annual, National RHS award for horticultural success in prisons. We hope that with our support on the orchard, next year will see the site come up trumps! Keep an eye on our website for more updates on our prison orchard partnership.

*Prisoners’ names have been changed for confidentiality