Wassailing is a ritual to encourage a good crop. The name comes from ‘hail’ as in Hail + Hearty.  We’ll be making noise and singing sweetly to wake the orchard and encourage the sap to rise. We are at our very busiest during the winter.  Merrin is leading volunteers to restore mature orchards, Kath has been to Parliament to drink cider and raise our profile amongst orchardists across the UK, and Lewis is designing a permaculture orchard for Jubilee Park in Enfield which will be our largest orchard so far. Lots of orchard leaders are interested in permaculture – for example Mich from Hillside Gardens Park which we planted in December has told us about permablitzes http://www.permablitzlondon.com/what-is-a-permablitz/ I’ve been doing lots of planting and thought I’d share my week for you: Sunday 12th  Jan Drove to Alara who kindly store our trees and guards in their permaculture garden,  then to Old St to collect our tools  and on to Wyck Gardens in Loughborough Junction near Brixton. Said hello to the horses in the stable there and planted five trees with Loughborough Farmers – A Cambridge Greengage, an Adam’s Pearmain apple, which they dedicated to Nelson Mandela, an Ashmead’s Kernel apple, an Aromatnaya quince and a Conference Pear. Then helped restore a mature apple tree and then were treated to great pizza cooked in a portable oven. Then back to Old St to unload.

Restoring an apple tree in Brixton

Monday was a day of inviting people to Orchard Leader meetings to look at what people will do with their harvest when new orchards are fully fruitful. Tuesday I went to a ‘Rethinking Parks’ day run by Nesta who are keen to find new ways of running parks that save money – for example grazing instead of mowing (and orchards!). Met  some great people. Wednesday – Loaded up a van with tools for Brendon, who helps us out to deliver to Enfield.  Changed into something smart and went to City Hall for the RE:Leaf meeting with Woodland Trust and other urban tree planting groups. Thursday – Held an assembly and planted an orchard with the lovely kids at Oakfield School, just near the north circular in Enfield. A rainbow welcomed us. Here we are in the paper: http://www.thisislocallondon.co.uk/news/10946096.Green_fingered_pupils_help_plant_orchard/?ref=twtrec Could not have managed without our lively and intelligent new volunteer Marco, a professional gardener who is learning about orchards with us. In the evening I presented to a meeting of councillors and directors and local orchardists in Enfield. Thursday was also  Tu B’Shevat – the Jewish New Year for Trees. Friday – Took trees on the bus ready for their new site. On the top deck met Jenny – an orchard leader from Cowley Estate in Stockwell. Enjoyed taking apple trees George Cave and James Grieve across London and tweeting en route. 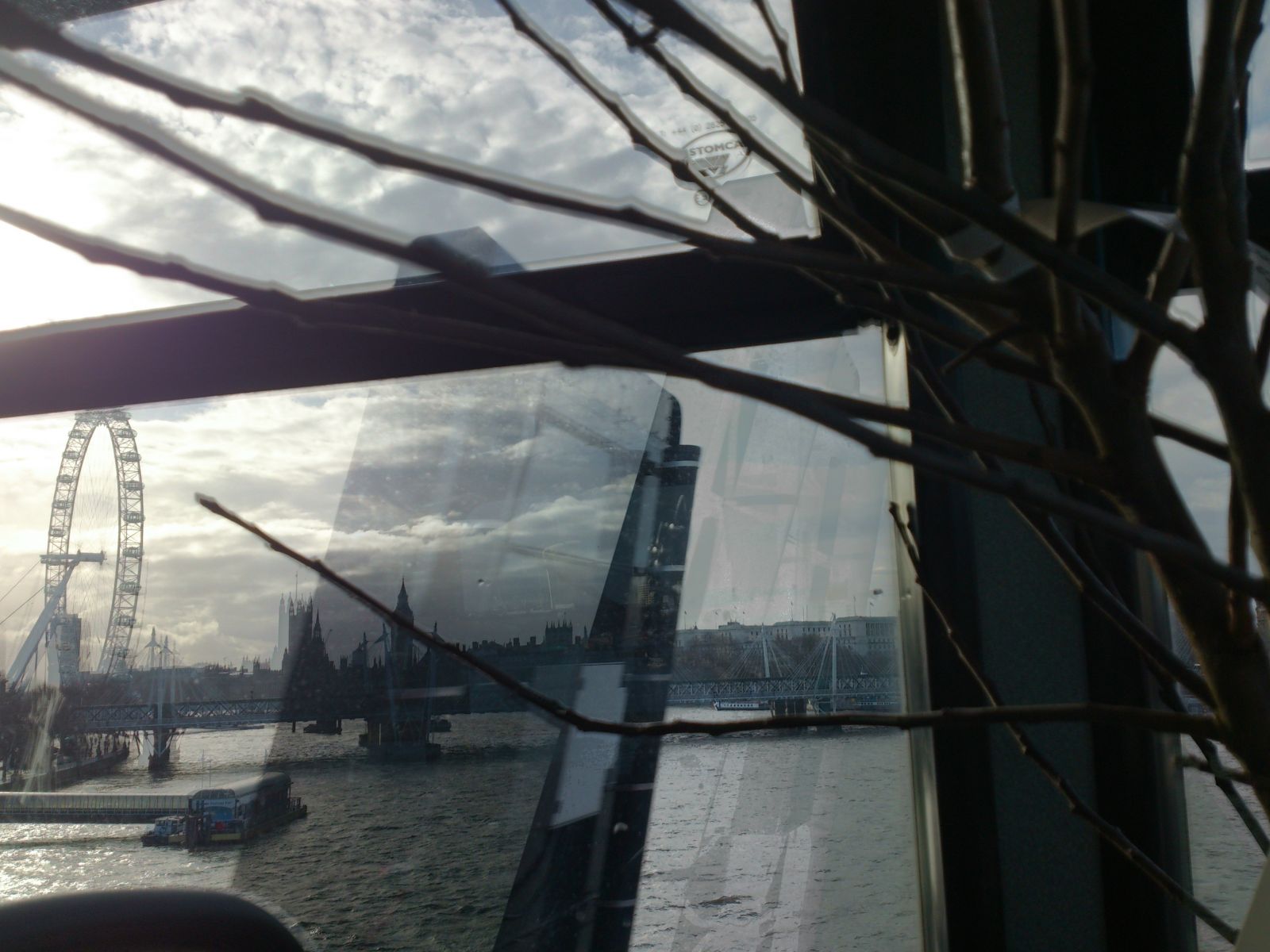 Fruit Trees on the Thames 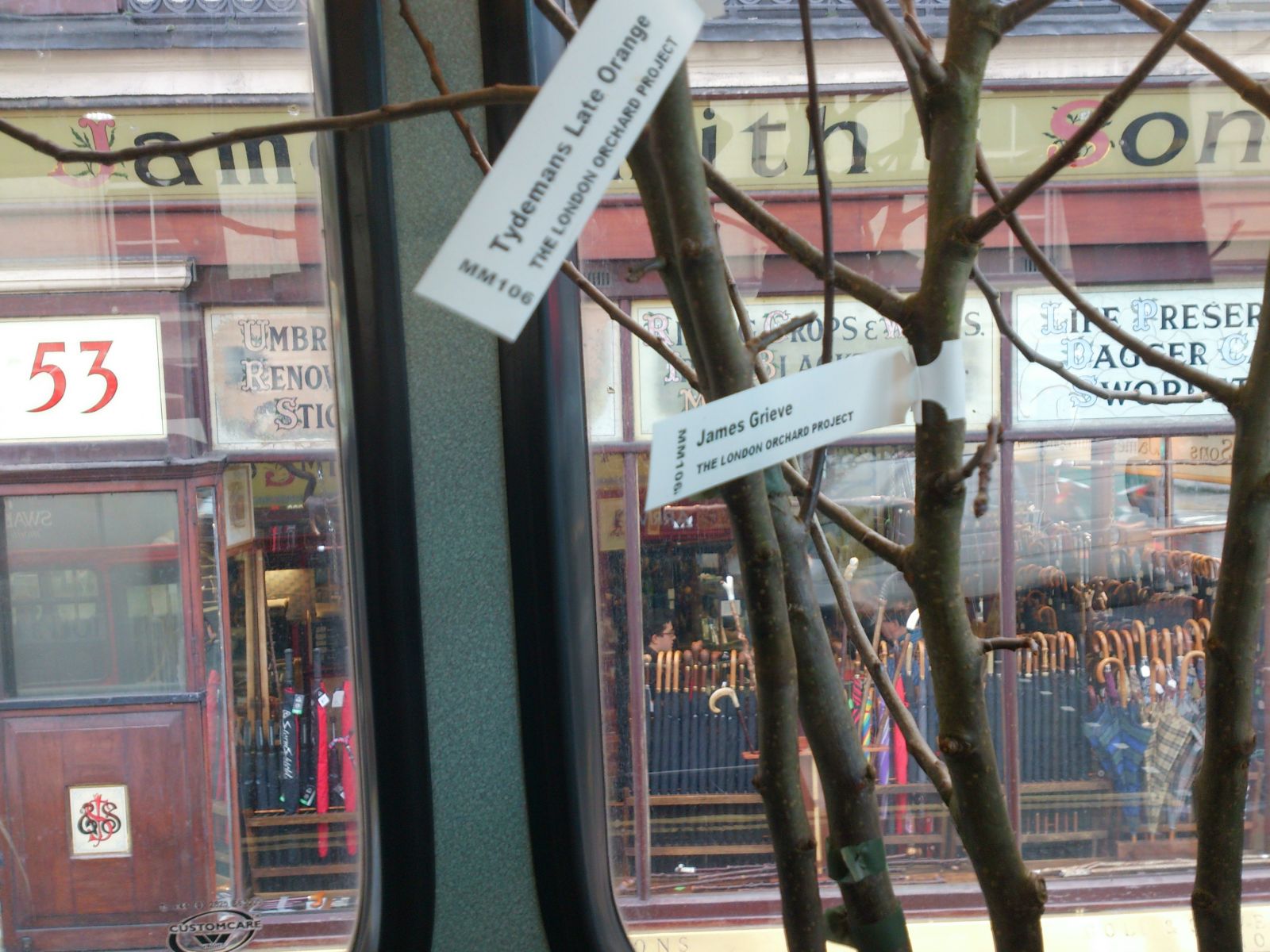 Saturday – Marco and I loaded up and then drove to Walthamstow where we – along with E17 Fruit Bag – planted four trees with young families in Stonydown park and then five trees in Tenby Estate. Our new cable avoidance tool came in very useful for avoiding electrocution. 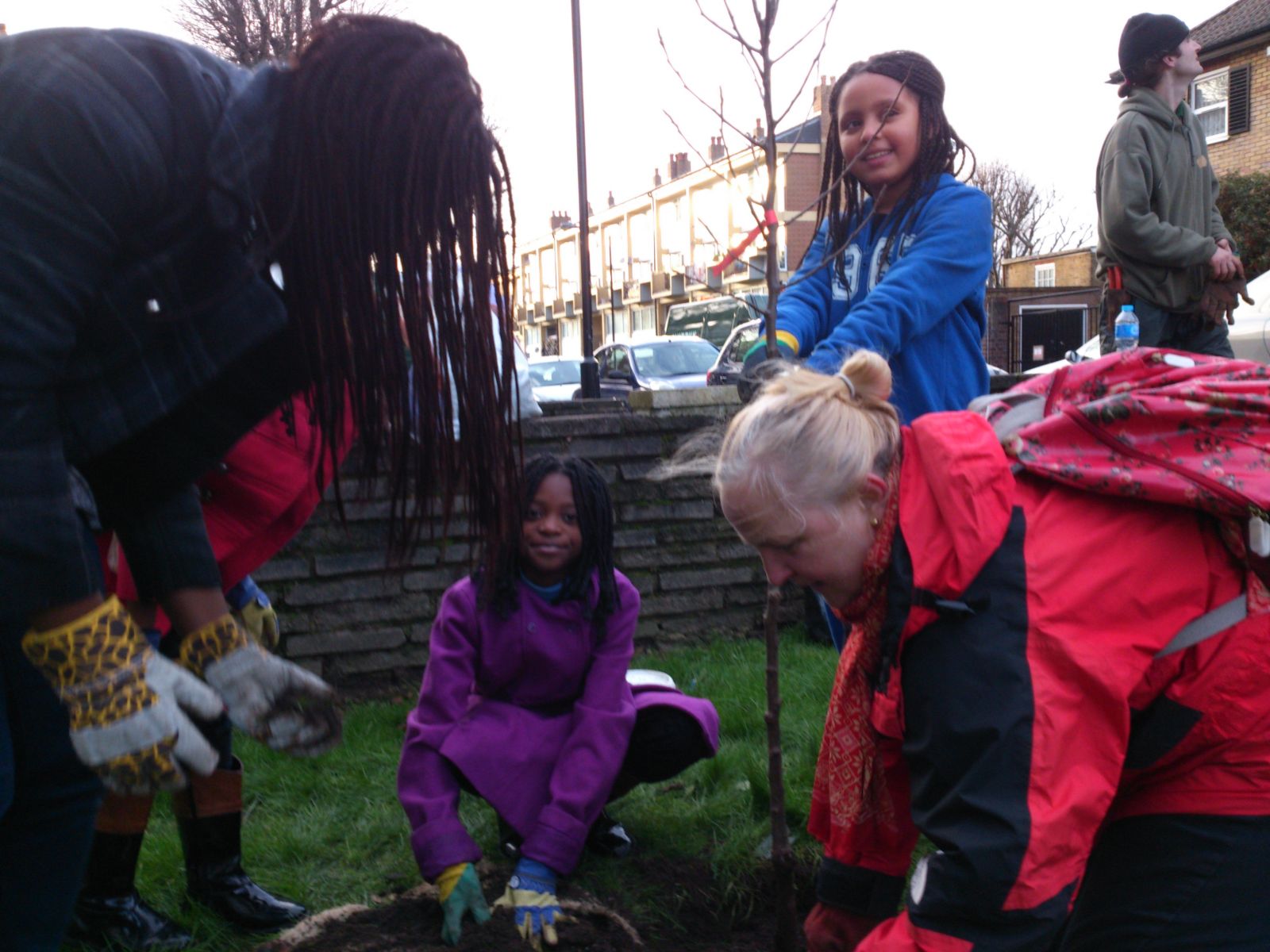 Sunday 20th Jan – Luckily was able to keep our tool in the van overnight. Marco and I drove to Elephant & Castle and collected two guards from Nursery Row Orchard who do not need them anymore, then on to Crofton Park railway station to plant a six tree orchard alongside the tracks, with the local gardening group. Planted bus-riding trees James Grieve and George Cave, and a Merton Pride pear – developed in South London. 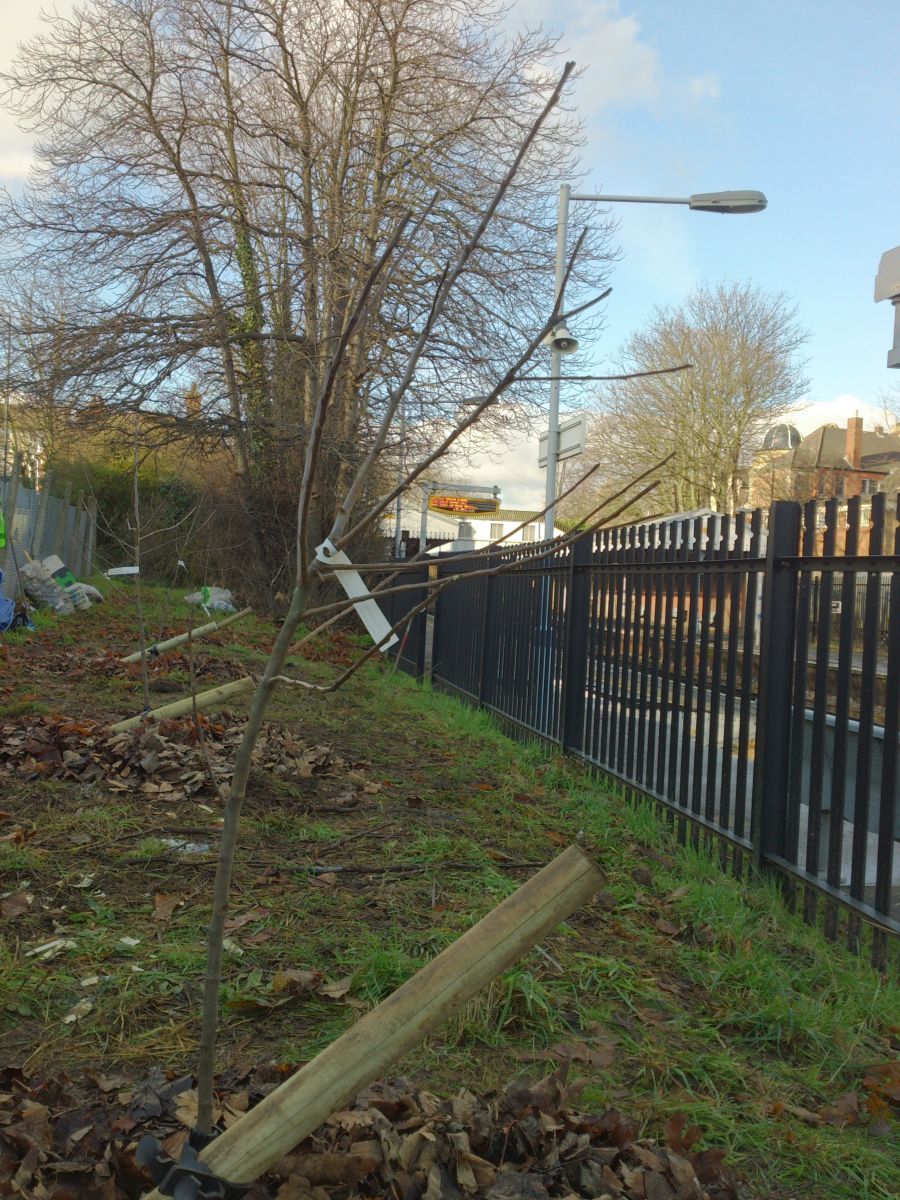 Then we went on to nearby Hilly Fields to replace a tree that died and plant and guard three more as an extension to their orchard.  One of the orchard leaders there – Judy – said the guarding reminded her of pounding Maize as a little girl. I have always thought it looked similar, especially the bit when you drop a heavy bar into the ground to make space for the post. Orchard Planting – better than the gym and with fruitful results!  – Amber 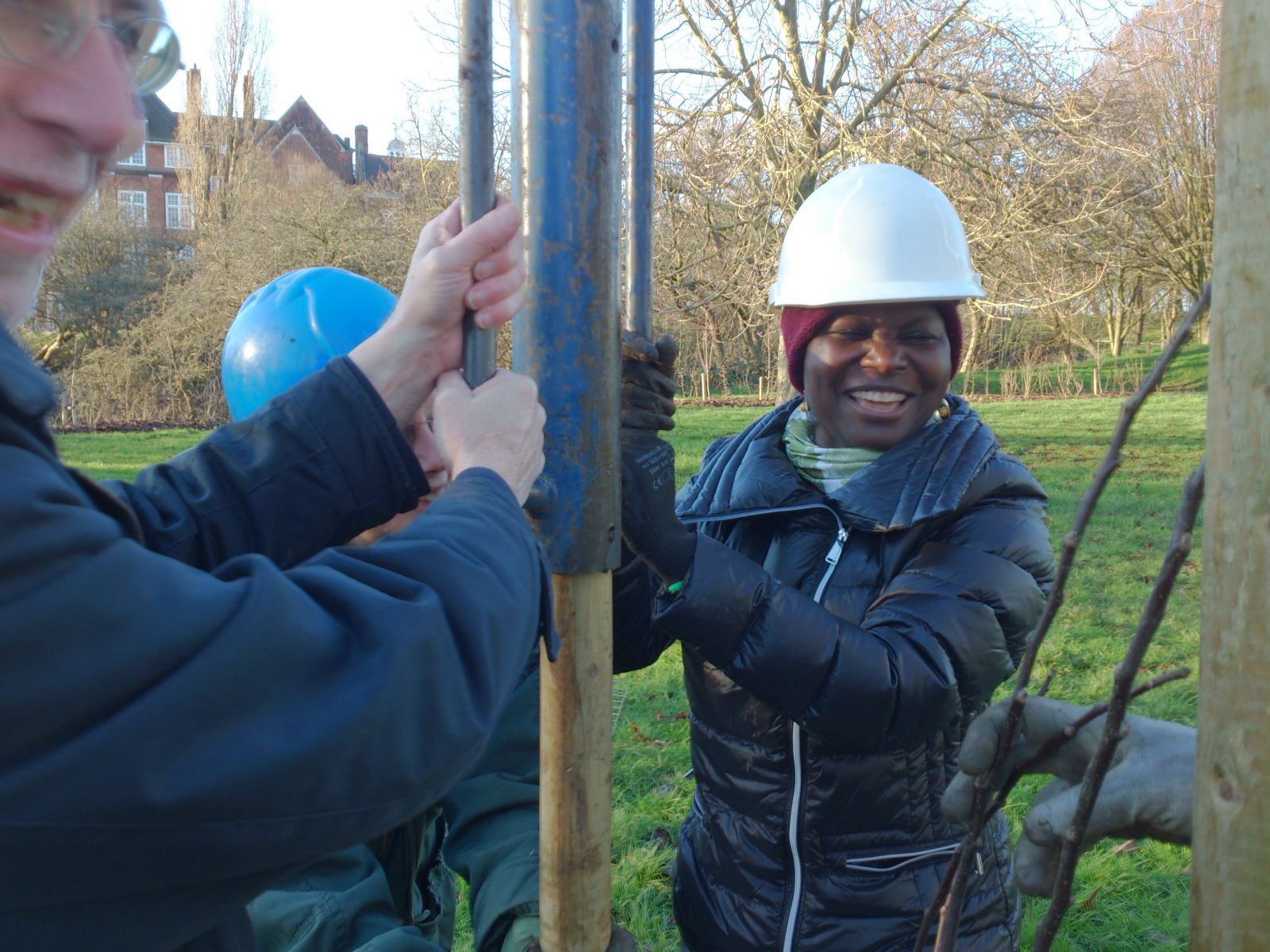 Judy guarding a tree in Hilly Fields and feeling like a kid having fun in Malawi.