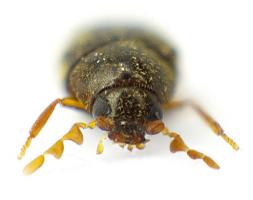 We were very excited recently to have it confirmed that a beetle we found at an old orchard in east London was the rare Dorcatoma substriata  – nationally scarce and not seen in London since 1928!

Russell Miller, who works for us as a consultant arboriculturalist and ecologist, found the larva of the beetle in a Shaggy Polypore (Inonotus hispidus) bracket fungus on an old apple tree in Chadwell Heath.

These features are important for over 400 species of saproxylic invertebrates that live on dead or decaying wood, including Stag Beetle, Violet Oil-Beetle, and the beautiful and very rare Noble Chafer beetle. Our friends at the People’s Trust for Endangered Species have information on their website of how to spot the signs of Noble Chafer (but don’t confuse it with the Rose Chafer, which is similar but much more common!)

Rot holes provide nesting sites for bats such as Noctule and the Brown Long Eared Bat, while hollow trunks can provide a home for Little Owls. 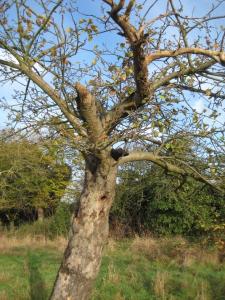 Of course this “early senescence” means apple trees don’t live for hundreds of years, like an oak, but it is possible to manage an old apple  tree so that you preserve the dead wood for biodiversity, while encouraging new growth, to help the tree live for as long as possible.

It’s not all about the decay though

Fruit tree blossoms are an important source of nectar for pollinators.

Orchards often have ponds and hedgerows which provide habitat for amphibians, mammals and birds, including great crested newts, hedgehogs and dormice. (Any excuse for a pic of a dormouse…)

And because orchard trees are more widely spaced than trees in a dense woodland, they let in more sunlight, which is particularly good for flying insects who need the warmth, such as bees and butterflies.

All in all, orchards are unique and special habitats, which is why traditional orchards are priority habitats in the UK Biodiversity Action Plan. 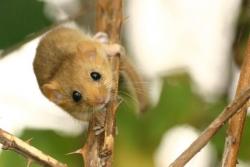