Home » Blog » Musings on the role of observation in organic growing 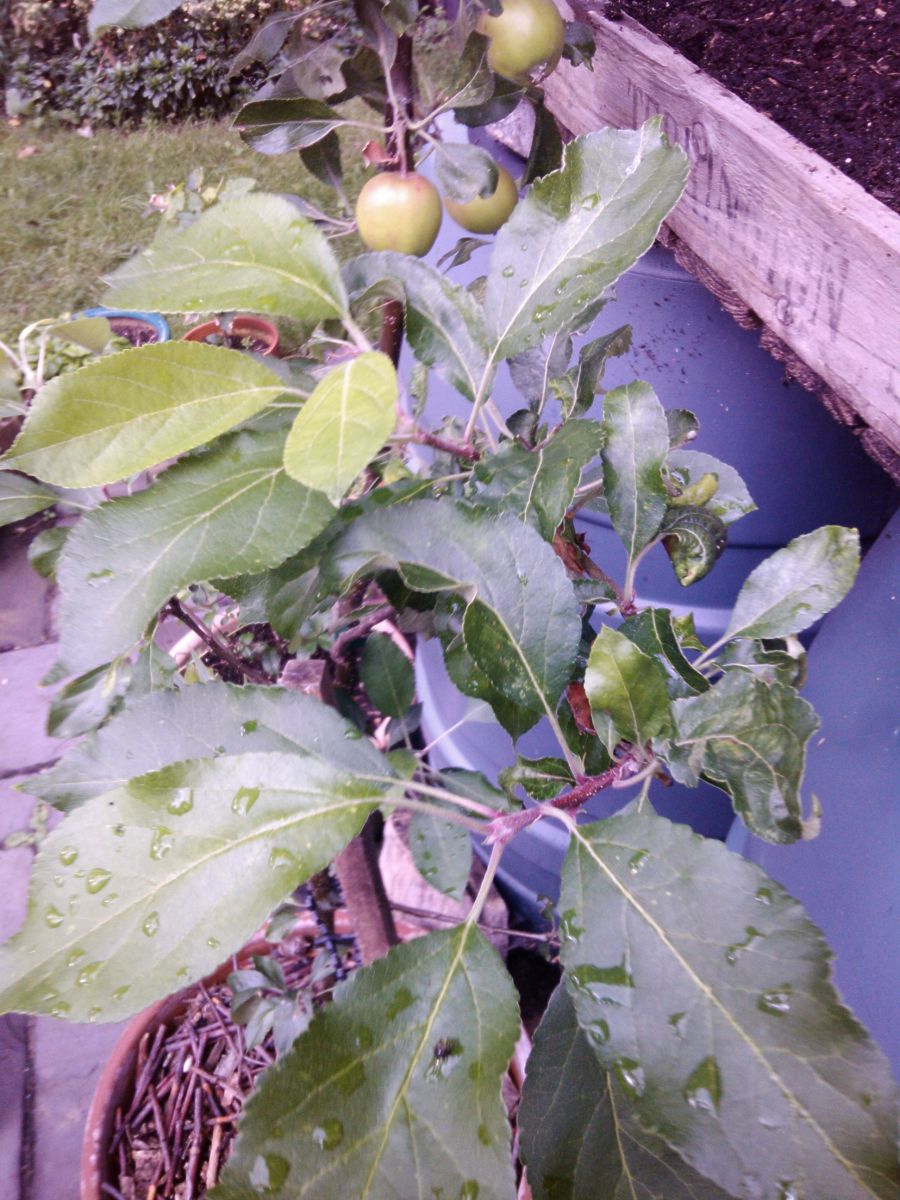 This is the first year I’ve had my very own fruit trees in my garden. I have two apple varieties, Discovery and Ashmead’s Kernel, and one Victoria plum. They are all in pots, mainly as there was no space left in the garden of my current flat, all borders and raised beds taken up by annual and perennial vegetables, insectory plants and the beginnings of a forest garden (how nice to move in with some fellow permaculturalist plant-loving souls!). As well allowing me to hoist my trees around with me through this transient period of my life, in which I’ve lived at five different addresses in as many years, the trees will enable to me observe their development on an almost daily basis. One of the key principles of permaculture is observation. By observing the natural processes and interactions that take place in and around our gardens, allotments and orchards, we can learn from nature and design and interact (or not) accordingly. How will they respond to different types of mulch and feed? How frequently will they require water? How will their growth respond to my tinkering and tailoring each time the secateurs are put to use? There will be more general lessons also. I have already learned a great deal from my trees in this first half year of their tenancy. My Discovery succumbed to an infestation of those little plant-vampires we all know – aphids. They arrived and produced young at a seemingly exponential rate and within days the lush new leaves were curled and deformed as their life-force was drained. I decided it was time to step in with some hominid direct action, and prepared for some good old-fashioned aphid squishing. However, on uncurling one desiccated leaf I noticed something I’d never seen before, despite my life-long potterings as a back garden naturalist. I recognized it instantly however from photos I’d seen since becoming a food grower and aspiring orchardist: a hoverfly larvae. Alien-like in appearance, moving around more like a maggot (which is essentially what it is being a fly larvae, nothing at all like the more commonly spotted beetle larvae its spotted cousin, the Ladybird) with its translucent body displaying a gut packed solid with aphid; these are up there with the ladybirds in terms of aphid slaying potential. Instead of removing the leaf or squishing the perpetrators, I left it alone, leaving the feast to my ally. On uncurling a second leaf I found another hoverfly larvae happily gorging itself in preparation for the energy-intensive metamorphosis into adulthood. This sequence continued, with either a solitary hoverfly or ladybird larvae on each of the infested leaves. The troops had arrived and I felt no need for intervention. Sure enough, the aphids disappeared and the tree began to put out new leaf, while the old crumbled and drifted back into the mulch below, continuing the cycling of nutrients. These new leaves, lush and broad, have since been untouched and the tree has been happily photosynthesizing in peace. Had I been impatient and waded in with my fingers, the predators would probably have moved on, looking for more bountiful supplies. Inevitably I’d have missed a few and a second bloom would have occurred. But by observing and practicing some patience, nature maintained the balance without any assistance. Organic growing can sometimes require patience. Wading in with pesticides would have killed the aphids, but also their beneficial insect predators, precipitating an unhealthy cycle where we are dependent on the pesticide. and Monsanto and their ilk continue to rub their hands. So, grab yourself a cuppa and get out amongst your fruit trees as frequently as you can. Inspect the leaves, observe development, and identify insects, both friends and foe. Enjoy the way trees act as our visual indicators of the changing seasons. Who knows, one day I may even be able to liberate my trees from their pots, allowing their roots to spread into the ground. Once I’ve put down roots of my own that is. Lewis McNeill