Last winter we planted 34 trees to celebrate the achievements of the Team GB Paralympic athletes. This is the story behind the new orchard. 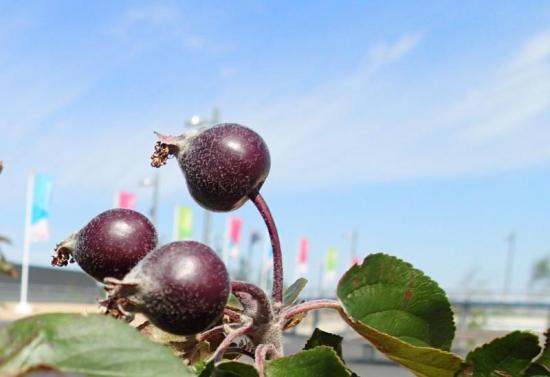 The 2012 Paralympic and Olympic games showed the world that these islands are great at parties.  It all opened with the country dancing and village fayre of Danny Boyle’s ceremony. Look closely and you will see Bethlem Royal Hospital Orchard Leader Peter O’Hare during the industrial revolution. Fire-breathing steampunk creatures helped close the Paralympics, courtesy of Mutoid Waste Company, who brought a delicious flavour of 90’s festival punk dub rave culture to 7.7 million viewers.
In between the two was the opening ceremony for the Paralympic games directed by Bradley Hemmings, and Jenny Sealey one of the many deaf and disabled people involved in the ceremony.
Stephen Hawking reminded us to “Look up at the stars and not down at your feet. Be curious.” People rode giant apples, reminding us of the deep link between science and apples (think Newton), and also apples and health.

The UK Paralympic games were a turning point in many people’s view of disability, moving people on from a medicalised view of a person who ‘has a disability’ to a social model where ‘the person is disabled by society’ – e.g. they are disabled by the fact that there are no ramps or hearing loops.
The golden apples of the ceremony hinted at the enduring myths of the Greeks and Romans featuring golden apples, such as The Choice of Paris.

After the games Mandeville Place in the Olympic Park was dedicated to the Paralympic legacy. Mandeville Place is the area of the park that was covered in bright coloured circles during the games, but by 2014 had become a massive expanse of grey tarmac.

This is where we come in – turning this expanse of grey tarmac, this nothing into a place, into an orchard. 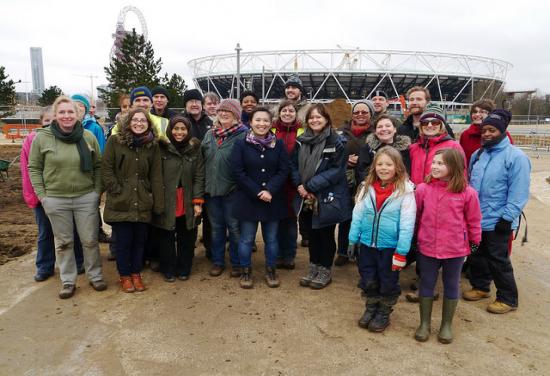 If you visit the site today you will see four giant planters. One has old gnarled apple trees and one has tall apples and pears planted as part of the pavilion designed by Studio Weave in partnership with Churchman Landscape Architects. Churchman were incredibly good at championing the idea of planting an orchard and introduced us to the London Legacy Development Corporation. Many thanks to Andrew and Vicki who are a pleasure to work with.

The final two planters are a community orchard. We chose to plant a tree from the home country of each gold winning Paralympic athlete and we recruited and trained a wonderful team of local volunteers to become Mandeville Place Orchard Leaders.

This combination gave a great geographical spread, a wonderful mix of cookers and eaters, apples, damsons, cherries and pears, and some wonderfully poetic and meaningful moments, such as Jessica Jane Applegate, Paralympic gold medallist from Norfolk, planting a Norfolk Royal Russet apple. 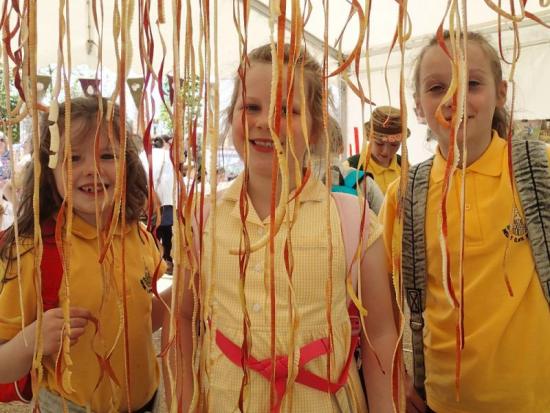 Recently the site by the stadium was home to a ceremony once again, with folk dancing and apples in a ‘Summer Wassail’ opening of the new look Mandeville Place.

We were joined by Hulme School from Lancashire who were one of the winners of the apple naming competition we held last year in partnership with the London Legacy Development Corporation. The pupils folk danced and enjoyed taking part in our longest peel competition and apple hedgehog making.

The apple name they chose was ‘Paradice Gold’ which we loved as it reflected the Paralympic values of Determination, Inspiration, Courage and Equality, while also linking back to Paradise and the Garden of Eden. In many cultures ‘paradise’ is an orchard, including ancient Greek Elysium, and Celtic Avalon (land of apples).

Baby Paradice Gold trees are being tended by Frank Matthews nursery, who developed them, and will be planted on site next year.

Two other new apples were also planted. Core Blimey, which we developed for London, and  – poetically –  three ‘Trinity’ apple trees, developed by Polish Londoner family of Jerzy Bartoszewicz. Read more about that here on our blog.  We were delighted to be joined at Mandeville Place by Jerzy’s family.

We planted these trees partly because their vivid pink fruit and name of Trinity reminded us of the games and the agitos – not to mention the bind between the number three and apples, from The Choice of Paris a contest between the three most beautiful goddesses of Olympos for the prize of a golden apple, to Jonathan Strange and Mr Norrell, magical apples usually come in threes!

Of course we must remember that life for disabled people is not a life of endless of sport and celebration. The wonderful Together2012 kept us informed, and provide access to free high-quality, disabled-led arts events and activities including folk dancing.
Go and see their wheelchair folk dancing or join a class.

Togther2012 also told us the wonderful secret that long ago there was an elderflower orchard just near Mandeville Place, and a local monastery used the fruit to make wine. Mmmmmm.

And did you know that the original prize at the ancient Olympic Games was an apple bough? 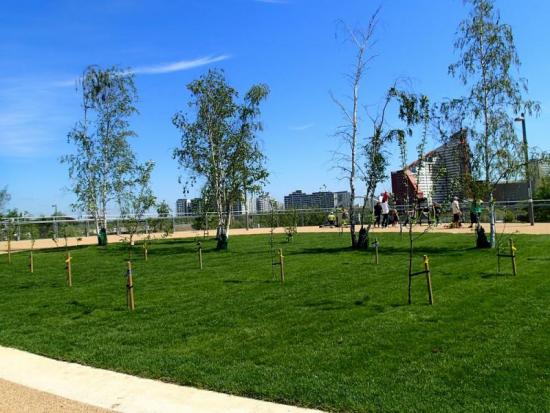