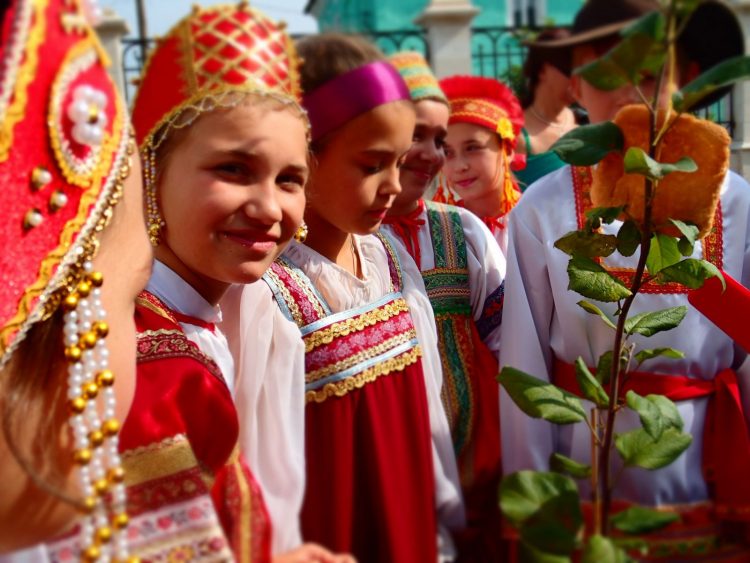 This is part one of our two-part blog about our trip to Russia in 2014. Find Part Two here.

Our orchard planting and restoration is about bringing communities together to prepare for the future and to enjoy the present. Orchards bring beauty and create connections away from the mass media and mass agricultural policy. So when we tell you about our trip to Kolomna – a small city near Moscow – we hope you understand that this was all about making links in the spirit of friendship and peace, by getting to know real Russians and share knowledge, so none of us are isolated and we can learn about each other from each other and not the media. On Amber’s way to Moscow she picked up a free mag at the tube station. On the cover a woman held an apple and the text read ‘Let the Fairytale begin.’ And Russia was like a fairytale in all its beauty and kindness, strangeness and familiarity.

Like in fairytales we know that danger and prejudice lurk at the edges (armed conflict, sanctions that effect ordinary people, Section-28-like law) and we thought long and hard as an organisation about whether we should be travelling to Russia, especially when relations between our governments are so frosty. We came to the conclusion that the more communication we had with our Russian counterparts in the orcharding world, the better. 2014 is the official year of culture between the UK and Russia. To celebrate this a small group of Russian social entrepreneurs – Natalya, Elena and Dimitry – invited us to their Apple Day – the Kolomna Apple and Literature Festival. This small group have started four museums in their town, including the wonderful Museum of Forgotten Taste. They fund themselves by making the traditional sweet Pastila (before this they did piano teaching and water-quality inspection work). Their work attracts people from all over Russia who are inspired by their way of restoring cultural heritage. Also there were English bakers Matthew and Kate, and Susannah, who looks after a huge orchard of original Bramley trees, and Isabella Dalla Ragioni, a fruit tree archaeologist who has a huge orchard of rare local varieties in Umbria, Italy.

The festival… was amazing. We discovered Antonovka apple trees and their glowing juicy pale-green apples, known as ‘The People’s Apple.’ We introduced the Russians to Russets, which they loved. We wassailed. We held the longest peel competition with the support of dedicated volunteers Ksenia, Elena and Alena. We taught Russian children apple bobbing – they came sprinting! We learned how much the Russians revere their poets and writers. We planted trees, including in Dostoyevsky’s orchard. (You know – him who wrote ‘Crime and Punishment.’) In fact Dostoyevsy said ‘Humanity will be cured saved by the orchard.’ We had the total pleasure of visiting the four thousand tree organically-managed orchard at the estate of the writer Tolstoy (You know – him who wrote War and Peace and Anna Karenina). We ate apples from a tree planted by Tolstoy’s father – the oldest biggest apple tree we have ever seen. 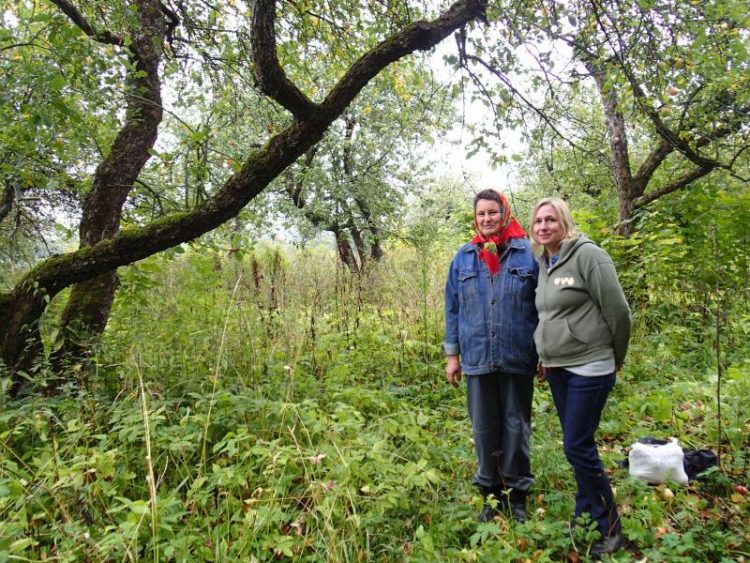 Amber and the orchard manager at Leo Tolstoy’s orchard

The main festival activities took place on Sat 13th September, where we set up our a-peel-ing wirly gig device for a curious Russian audience. For those who haven’t used one of these before, it is an ingenious way of peeling, coring and slicing apples into ‘fruit slinkys’. We wanted to do something interactive for our stall as we knew verbal communication would be tricky, with only one of The Orchard Project party (Stephanie) having any working knowledge of Russian. 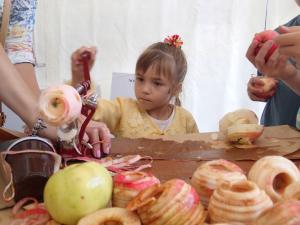 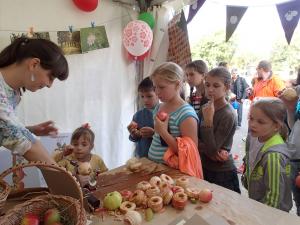 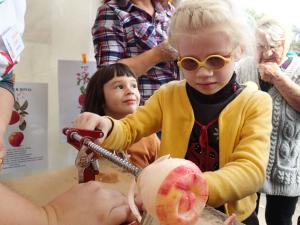 After you have peeled, cored and sliced your apple, you are left with a really long peel, up to 2m long, which people entered in a longest peel competition, the winner receiving one of the wirly gig machines. We also found the most hard working group of Russian students to be our volunteers on our stall, peeling apples and talking to people all day.

While the volunteers kept people amused at our stall, the team went off to plant a new community orchard made up of English and Russian apple trees. This was an opportunity to share knowledge of how we plant community orchards in the UK, training and engaging local people in tree planting and after care. Amber even valiantly tried to get some local builders on the site involved much to the bemusement of our Russian hosts but essential for the trees to be well loved. The new orchard was a gesture of the co-operation between the two countries, representing life, love and friendship.

While the trees were being planted, a group of children in traditional Russian dress sang folk songs. We were all completely moved by this, Kath even having to give an interview to Russian TV, choking back a few tears. What could be better – children, haunting Russian melodies, young fruit trees, new friendships, oh the magic of orchards! 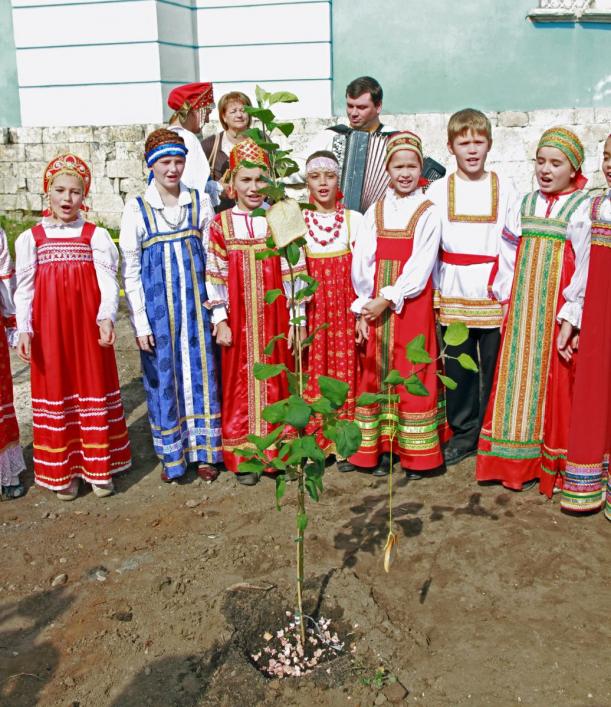 If you look very carefully at the base of this tree, you will see some scatterings of pink cake. This is Pastilla, the speciality apple product of the town which we used instead of bread for a mini (and very unseasonal) Wassail. This was because we were asked to show some English traditions related to fruit trees. Wassailing is traditionally associated with 12th night in January, but a Wassail celebration – which dates back to Celtic times and is said to increase the crop – is too good an opportunity to save until winter. Part of a Wassail involves appointing a Wassail queen and king who leave an offering of bread for the birds of the orchard, traditionally robins. We supplemented this bread with some Pastilla to create a bespoke Russian Wassail.

When we went back to the festival site, we introduced Russians to apple bobbing, which went down really well on the beautiful hot day.

Watch a short film with a great dramatic soundtrack about the festival here (it’s in Russian).

Our heartfelt thanks to our hosts and translators for showing us the very best of Russia.

Meanwhile here is a photo of the most urban apple tree we have ever seen – just the other side of the river from the Moscow Kremlin: 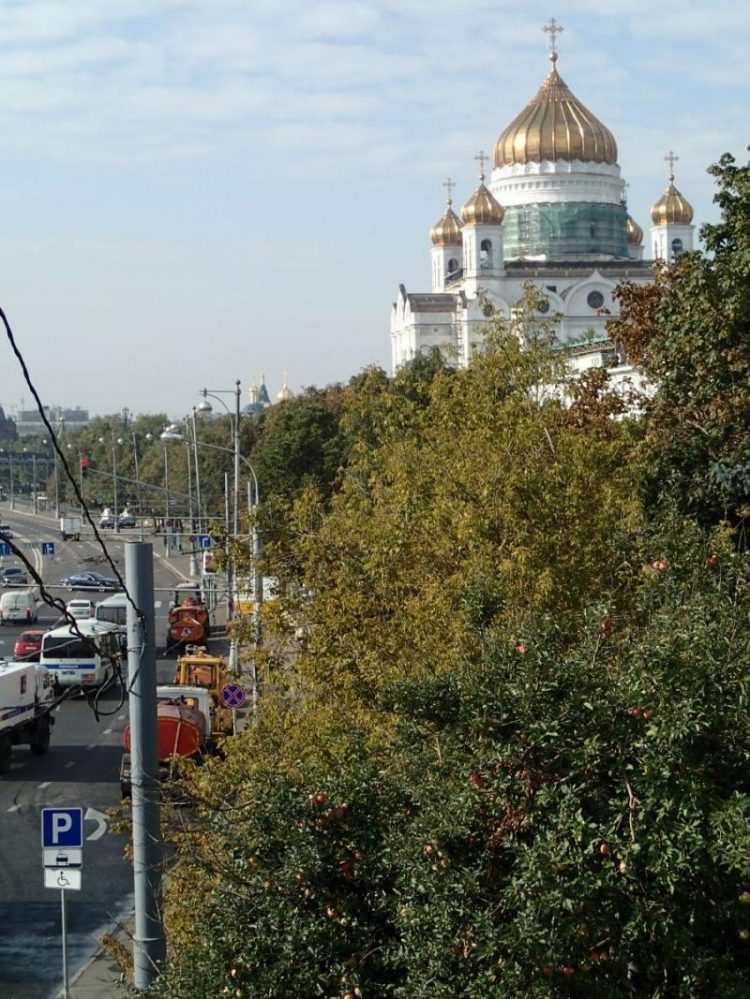