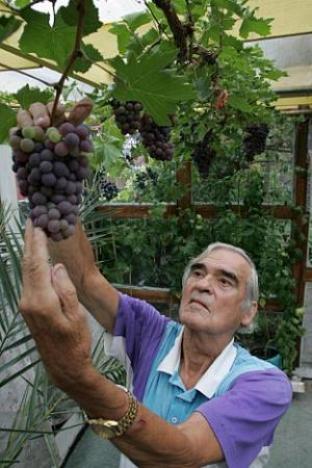 This winter we planted three trees with a remarkable history within the new orchard at the Queen Elizabeth Olympic Park. Along with over 30 fruit trees representing the home regions of Britain’s Paralympic gold medal winners, there are three Trinity apple trees, developed and grown in a backyard in Whitton by plantsman and scientist Jerzy Bartoszewicz.

In January 2014 we were contacted by Jerzy’s daughter Alex, to ask if we could provide a home to some of the trees he grew, as he had passed away the previous year and the family wanted to ensure his legacy lives on. 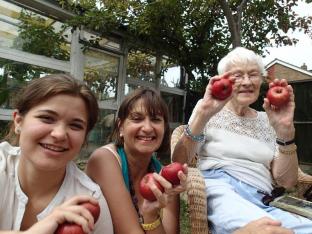 Jerzy’s wife Patricia, daughter Alex and grandaughter Samantha shared some of the Trinity apples with us and told us the story of how the trees were developed. It is likely that the trees are a cross with Malus niedwetzkyana but Jerzy’s family also remember him experimenting with the pollen of neighbouring cherry trees as a way to bring rosy colour to the flesh of the apples – he clearly had a poetic soul!

We transplanted an ‘Alex Red’ apple and another un-named apple variety and we’re working with the team at RHS Wisley to propagate them. We were also given the three young Trinity trees. 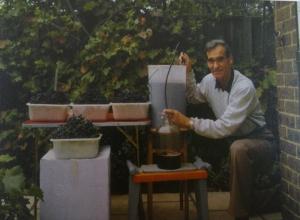 Jerzy was a chemist and a keen environmentalist with a fascinating life story – originally from Poland, he fought in the resistance, survived imprisonment by the Nazis, and eventually settled in London.  With his wife Patricia, he was a dancer for many years, performing in ballets and polish folk dances – even appearing in an Oscar winning film!

In the back garden at their Twickenham home Jerzy grew and experimented with many different plants, fruits and vegetables. He believed we should emulate the spirit of the war time Dig for Victory movement and return to growing local food in a sustainable way. 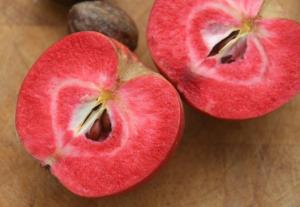 The Trinity apple trees now at QEOP have striking red flesh, and stunning pink blossom. They’re cooking apples that make a gorgeous puree, high in antioxidants and perfect as jam, or as part of apple crumble.

As far as we know these are the only apple trees to be bred and grown in London for many, many years. The trees are undergoing trials at several nurseries, and can also be found in Richmond’s Terrace Gardens, a memorial to Polish pilots who fought in the Battle of Britain.

These trees, planted in the Mandeville Place Orchard, as a celebration of London’s Paralympic Legacy will stand as a reminder of Jerzy’s commitment to the ideals of freedom and equality and his dedication to family and community. 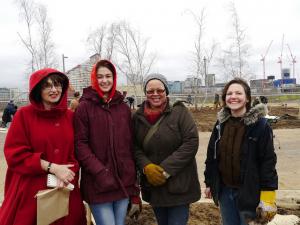 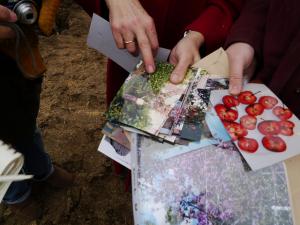 Alex (in red!) and Samantha were present at the planting day and shared the history of the trees with other volunteers. 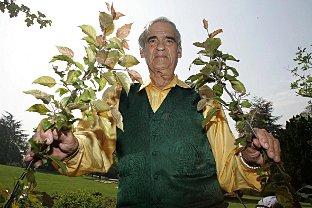 We look forward to the beautiful pink blossom and red fruit for years to come.