Foraging with Mark Williams – bringing the wild alive in us by taste and discovery. A taste adventure.

At this time of year in the orchard we can see the fruits beginning to form on the trees and the fruit bushes – but we have the whole summer to wait until the main harvest. This is therefore the perfect time to get out the foraging basket and broaden our horizons to what other delights the orchard environment can offer us. In summer last year we were lucky to have a workshop at North Kelvin Meadow in Glasgow with Scotland’s foremost forager Mark Williams of Galloway Wild Foods. As the lessons from that workshop are still with me, I thought it time to share some of those learnings here. This blog is also Part 1 of a wider exploration of the cultural traditions of foraging and orchards in Scotland, and sets the scene for Part 2.

North Kelvin Meadow is an amazing wild space right in the heart of the west end of the city. It is a naturally regenerated meadow and forest within the grounds of what was once a sports pitch. A formal group was begun in 2008 to manage the space and a longstanding campaign was waged to prevent it being developed for housing, which finally resulted in a formal guarantee in favour of the conservation of the Meadow in 2016 from the Scottish Government. It is a well used and well loved space, with over 200 volunteers regularly involved, including 22 schools. It boasts the Children’s Wood, a community garden, raised beds, beehives, a wildflower meadow and of course an orchard.

We were lucky that Mark was willing to venture out from the rich hunting grounds of Galloway into the heart of Glasgow, and we were impressed by just how much could be found within the acre or so that makes up a piece of land like North Kelvin Meadow. Beyond being a sensory and culinary delight, this workshop was also an opportunity to explore all that an orchard can be. 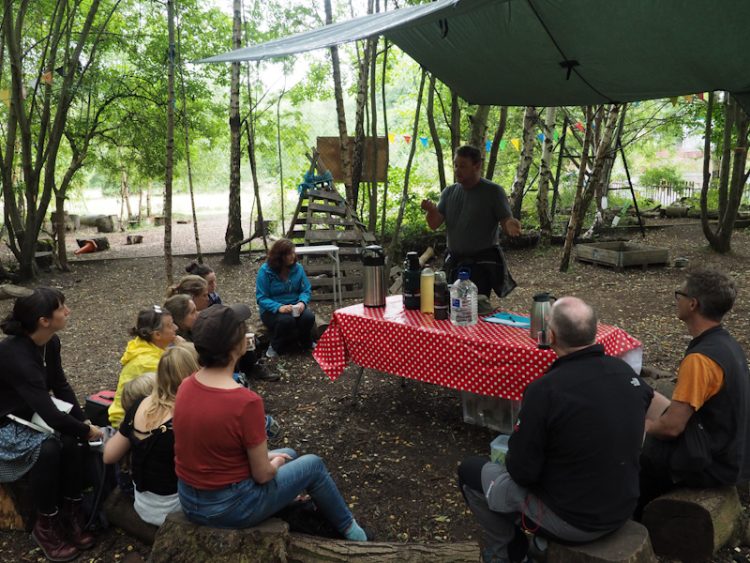 The etymological roots of the word orchard point towards a much broader use of the word than just the fruit bearing trees of today’s meaning. The Online Etymology Dictionary cites the following roots:

This definition allows us to think differently about the nature of the orchard. A commercial orchard is primarily a monoculture of fruit trees, and the aim is to extract as much yield out of that acreage as possible – but a community orchard can be so much more than that, especially once you start to bring in the recent thinking on Forest Gardens that has been promoted by permaculturists. A forest garden is a garden that is designed to mimic a natural eco-system, and in the case of our climate and location, the naturally occurring type of landscape (the climax community) is a forest. However a forest garden differs from a natural forest in that each plant has been consciously selected to provide an edible crop, a medicinal use or to provide habitat or forage for wildlife.

However, no matter how carefully designed, maintaining a garden is a lot of work, so it is refreshing to spend time with someone who is a full time forager, especially one so good humoured as Mark. “Foragers are just lazy gardeners” he says, with a twinkle in his eye. “Instead of having to spend all our time tending plants, we just find them where they already naturally grow.” And what a cornucopia you can find if you know your way around!

Mark recommends for the beginner forager to focus one one particular plant or plant family that they want to get to know well. The carrot family is daunting at first, as it includes such an array of plants, including some of the most notorious and poisonous in Britain – hemlock water dropwort (Oenanthe crocata). However, it does include Mark’s all-time favourite plant to forage – the common hogweed (Heracleum sphondylium), not to be confused with the recent invasive species Giant Hogweed (heracleum mantegazzianum). Common Hogweed is a very widespread and prolific plant that yields many delicacies through the year. Like many wild plants, one of tastiest yields are the first shoots that break out in spring – especially good cooked as tempura. This is also the most challenging stage of growth to identify (most easily identifiable when mature) so Mark says that if you know where there is a good patch you can mark the spot where next year’s shoots will appear by putting a hoop down on the ground. He thinks there is a great opportunity to start an annual spring Hogweed festival celebrating all the culinary delights of this under-rated weed.

Later on, in late spring and early summer, you can also eat the young flowers before they have burst out of their protective casings, and they are like a tender, pungent, nutty broccoli Watch out however for the sap if you are picking on a sunny day as it contains a low concentration of a chemical (furanocoumarins) which prevent your skin from protecting itself form sunlight – and can lead to minor burns and blistering. Giant Hogweed sap contains the same chemical in very high concentrations which can cause severe and debilitating blisters and burns – so be very careful! However Mark points out that the benefits and dangers inherent in picking wild food are in similar proportion to the products sold on supermarket shelves (some edible, some not, some that look tasty but are bad for us), it’s just that we have to re–educate ourselves in how to recognise what plants are telling us when we’re so used to just reading labels on packaging.

The seeds are also an unexpected taste explosion, coming after the unpromising pigsty aroma of the flowers (the probably origin of the plant’s name and useful for attracting flies for pollination). Both the fresh and the dry seeds really taste amazing, part of what Mark calls our ‘native spice rack’, with flavours of ginger and orange and allspice. Mark treated us to his award-winning Hogweed Seed Parkin. Make as per ginger parkin but substitute 95% of the ginger for ground hogweed seed. In fact a type of hogweed (Heracleum persicum) is a well known spice in Iran, where it is known as Golpar and used to flavor rice dishes, soups, to sprinkle over baghali pokhteh, (cooked fava beans) or over fresh pomegranate seeds.

When asked about the potential of Giant Hogweed, given its invasive and rampant nature, Mark disclosed that he had (with the appropriate prudence) given one of their dry seeds a munch and discovered that it was pretty similar to common hogweed. He remains healthy and strong to this day so there may yet be a use for these triffid-like terrors.

Another forest surprise is the unassuming Wood Avens (Geum Urbanum) which is also known as clove root. When we dug it up and washed off the dirt, there were oohs and aahs of surprise to find that it does indeed have a taste reminiscent of cloves. Another spice worthy of note is the aniseedy Sweet Cicely (Myrrhis odorata).

Mulled apple juice and cider from the Wort-yard anyone? Or if you wish to go further, you could try to follow in Mark’s bold footsteps by finding enough foraged spices to make a wild curry.

After an hour of progressing carefully round this tiny orchard and woodland studying and learning about all these amazing plants, we move into a different mode of being. The sounds of the city seem to have faded into the background. We enter into the philosophical mind-space of the forager.

We find some pineapple weed growing in a patch of ground worn by passers-by and dogs, As Mark says, weeds like catastrophe and humans make catastrophe all the time. Too right!

This unassuming weed smells strongly of pineapple when you rub it between your fingers, and can be made into a tea like chamomile, can be added to strawberry jam, and can make into a shrub (concentrated syrup that combines fruit, sugar and vinegar) for cocktails: Infuse the pineapple weed in vinegar then blend with a syrup made from pine needles.

We happen on many other interesting plants as well, summarized here: 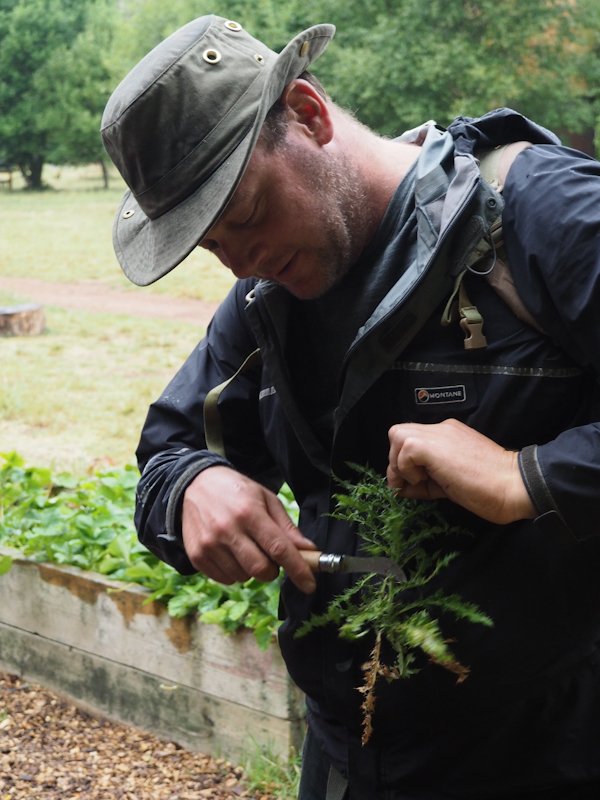 We find an elder tree and talk about how trees have their own personality that you can get to know over time. The elder tree in folklore is often associated with magic – the Elder Mother is thought to be the guardian spirit of the elder trees, and it was said, until recent times in various parts of England and Scandinavia that to take wood from the elder tree one would have to ask the Elder Mother first, or else ill luck would befall the woodsman. Mark conjectures that the magical and dangerous properties of the elder may be due in part to its hydrogen cyanide compounds – as well as its many uses – elderflower wine, elderberry vinegar (an all round health tonic), pickled green berries. 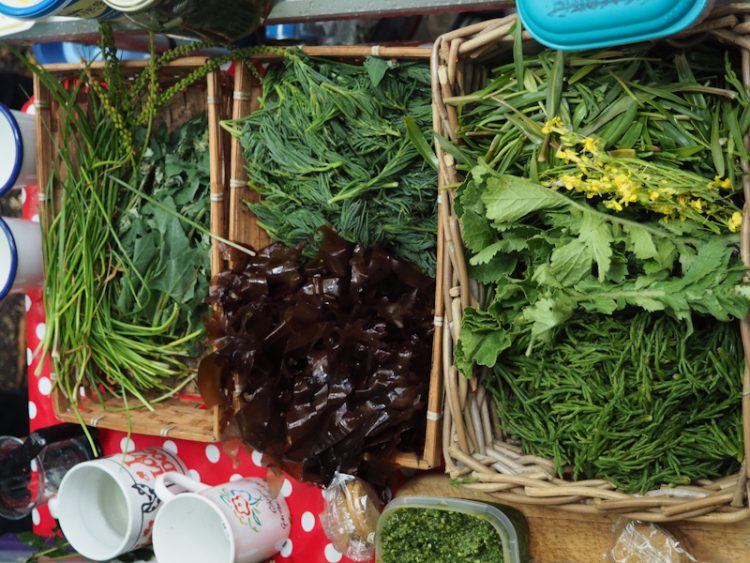 At the end of his walks Mark gathers all the participants together and cooks an incredible meal from the freshly gathered ingredients – on that occasion it was wild sushi. We gathered under a tarpaulin as the heavy summer rains poured down around us. As we savoured the delicious fare it seemed as if we were existing in a timeless moment: surely people had spent the afternoon in this way in this place in far forgotten times. I could see a huge potential for our relationship to community orchards and forest gardens: by connecting with and encouraging our oldest relationship with plants and food, we establish the roots of a far deeper understanding of what is essential to maintaining a sustainable relationship with the species and ecosystems we depend on.

So get out there in your local orchard, hedgerow or wild land and see what you can find!

Part 2 of this blog will draw on the inspiration of this foraging experience and explore the wider cultural contexts of orchard culture in Scotland including our relationship with the land.