Home » Blog » From the orchards of Dostoyevsky and Tolstoy, to Shoreditch and Wembley 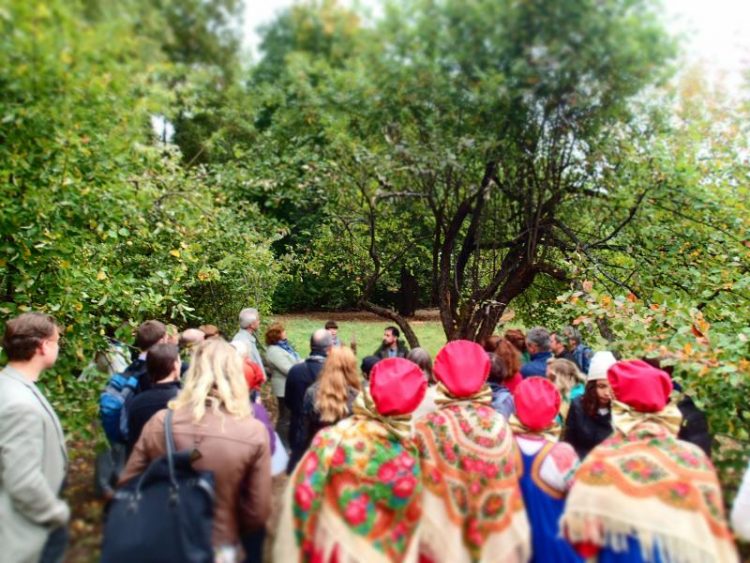 This is part two of our blog about our trip to Russia in 2014 – made in the spirit of friendship between people interested in orchards. See here for part one to read about how Kath, Ken, Russell, Stephanie and I taught Russian children how to bob for apples and learned about how much the people of Kolomna cherish orchards and writers.

Kolomna is a town that loves trees. In the twelfth century even building their Kremlin (a fortress, most historic cities have them) around the roots of the large trees rather than felling them. Kolomna made its money trading apples to Moscow, and the local monasteries and churches have orchards rather than gardens (though interestingly it seems that there is no specific word for orchard in Russian, who would refer to an ‘apple garden, or ‘cherry garden’).  There were once 400 orchards in the town. A Syrian priest, a long time ago, described the apples as ‘White as camphor, yellow as gold, red as cornelian.’ They were highly valued – Two priests managed to reconcile after an argument by the one giving 260 apples and a bough of an apple tree in exchange for two deer, a silver cup and a silver staff. I imagine that the bough was to let the other priest graft onto his trees so he could grow his own delicious apples.

It is the plan of our hosts – the people who started the Museum of Forgotten Taste and the traditional Pastila museum  –  to make Pastila from a local harvest.  Pastila is a delicious way to preserve the apples – rendering them like little clouds of apple froth. There would be plenty of fruit to use. The town’s gardens were full of trees overflowing with apples and travelling for three hours south to the Tula region took us past many miles of apple trees – pale fruit contrasting with the beetroot and mustard coloured roofs of Russian houses, with silver birch forests all around. Like cities in the UK Russia needs long handled fruit pickers made available for all (for example like Belsize library in London which lets people borrow them on their library card.)

On day two of the weekend festival we were invited to plant a tree at the orchard on Dostoyevsky’s estate, and Russell Miller held a restoration workshop with guests on the Apple Road tour.

The orchard – mostly trees that had grown up from the rootstocks of the original trees – was jumping with frogs and toads, and the surrounding woods were home to wood ants and huge anthills – which Russell pointed out are the sign of a healthy forest.

The atmosphere was amazing – when we planted in Kolomna on Saturday a group of children sang. By Sunday it seemed they had all grown up and the Newton Wonder apple tree was planted to the sound of beautifully dressed women singing and a man playing accordion.  A snippet of the planting is on this film here: https://www.youtube.com/watch?v=xmmefMq4rmA&feature=youtu.be 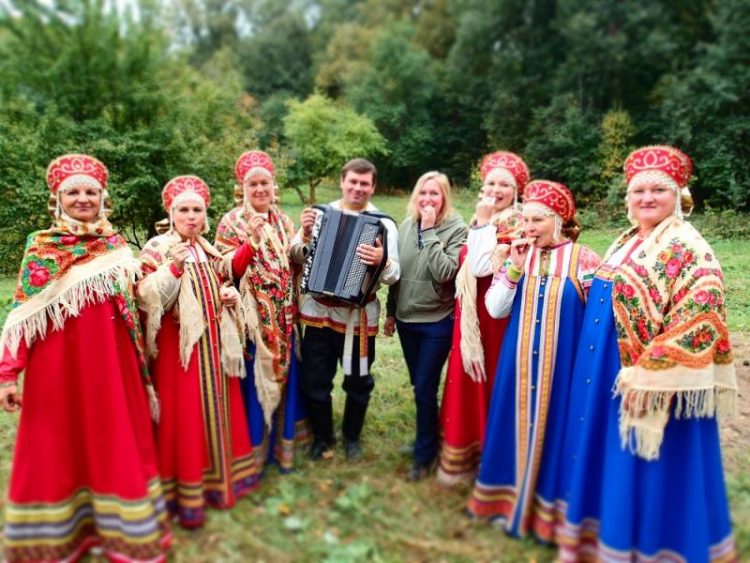 The women in this picture are eating a sweet that I brought with me from England – Kendal Mint Cake. This is the traditional English sweet that accompanied Tenzing Norgay and Edmund Hillary up Everest. I had bought it to complement the traditional Russian sweet of Pastila, but also because my Russian grandfather had settled in Kendal where he and my grandma planted a damson orchard and ran a vegetarian guesthouse during WW2. By amazing coincidence there were two Kendal residents who had also been invited to Russia – Matthew the (apple bread) baker and his wife Kate.

All this was quite wonderful. Then, the next day we travelled three hours to Tolstoy’s orchard, seeing red squirrels, and four thousand fruit trees, some so large two people had to reach around them – we felt we had gone to orchard heaven.  (In fact Paradise means orchard in Persian, and from the Greek’s Elysium to the Celts eternal summer, many myth have the afterlife as an orchard, so maybe we had caught the edge of that magic).

The orchard was exactly as we describe the perfect orchard with rich groundcover drawing up nutrients and attracting pollinators (in additional to the 60 beehives). Trees pruned so the branches are low and pickable and laden with healthy fruit. Standing inside looking out through garlands of apples was like being in a fairytale. There were also fields of baby trees grafted by the orchard manager – pictured here in headscarf. 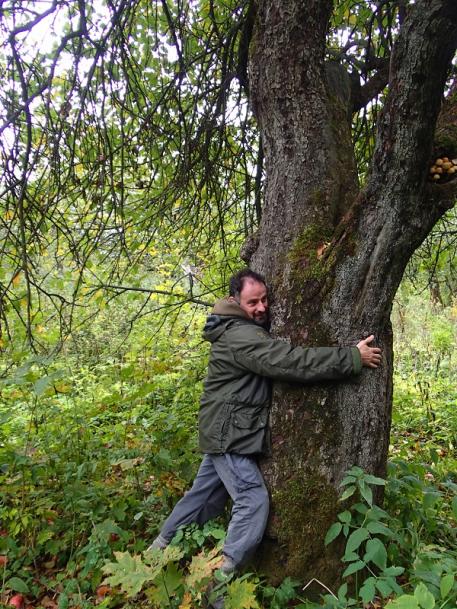 She did not quite know how much we knew and was explaining grafting to us until we gave her a present of grafting tape and she smiled widely and whisked us off to see the new grafts and the oldest trees – planted by Tolstoy’s grandfather, and complete with mushrooms growing in the branches – a wonderful habitat and still producing ‘Rosemarie’ variety apples. The apples were yummy, but meeting such a dedicated and talented orchardist was the real treat.  She told us the Russian name for Ladybird – ‘Little Good Cow’ and how she and her colleagues grafted a further 60 varieties to add to the other 900 in the orchard and how – very unusually for Russia  –  the orchard has been kept to organic principles since the 1960’s. She admired our practical footwear and said she could see our passion for orchards in our eyes. (And in Russell’s case in his tree cuddling. In fact he measures the girth of trees in cuddles.)

We travelled back to Kolomna feeling dreamy under a sparkling night sky – it’s rare for us to be away from the orange urban haze that blocks the stars.

But we do like the city. A few weeks later back in London, we met the Russians again at an event in Leila’s shop Shoreditch where they performed with their Dostoyevsky and Shakespeare puppets and gave us Pastila in a box decorated with a print of the original handwritten recipe by Tostoy’s wife (and mother of their eight children). 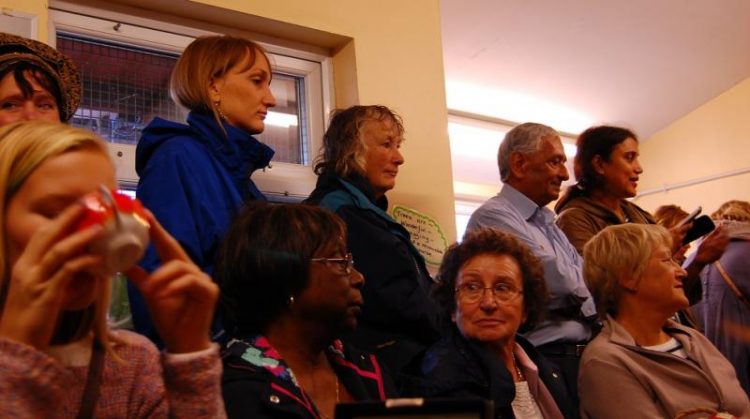 Then the Apple Road group came to Wembley where we have held restoration workshops with the wonderful group of volunteers there, who have planted 900 fruit trees in Fryent Country park in recent years.

The Russians gave everyone a taste of the life of a Russian tea-drinking 19th century merchant; and because every day of our Apple Road adventure had been sunny, we did not mind the pouring rain as we crammed into little room with a diverse group of Londoners and enjoyed each other’s company over frothy dishes of fresh apple Pastila.

Thank you once again to Natalya, Dmitry, Elena and Elena for including us in their Apple Road celebrations. Find out more here: