So far we’ve planted at…Goose Green school in Southwark, Wenlock Estate in Hackney, Fort Road in Bermondsey, and Christ Church Primary in Clapham, Fitzroy Park allotment in Camden (see pic above of Roger Lloyd-Pack AKA Trigger planting a Core Blimey), and York Way Court in Kings Cross (Just the other side of the canal from Kings Place),  Landfield Estate in Hackney, and Ladywell Fields in Lewisham, where we were lucky enough to have room to plant a mulberry, and two apple trees on vigorous rootstock that will grow to full size trees, like those in traditional orchards.

We were particularly tickled at the opportunity to plant at The Orchard Estate in Greenwich, near Elverson Road DLR. With one road named Quince Road and another called Russet Way, and tall blocks named after apple varieties, it was a real pleasure to plant at this previously fruit-free site. The kids who lived in ‘Pitmaston’ put in a Pitmaston Pineapple (an apple that tastes like pineapple), and those from Ellison House planted an Ellison’s Orange apple tree. And of course we put in a quince and a russet. (Pic below) 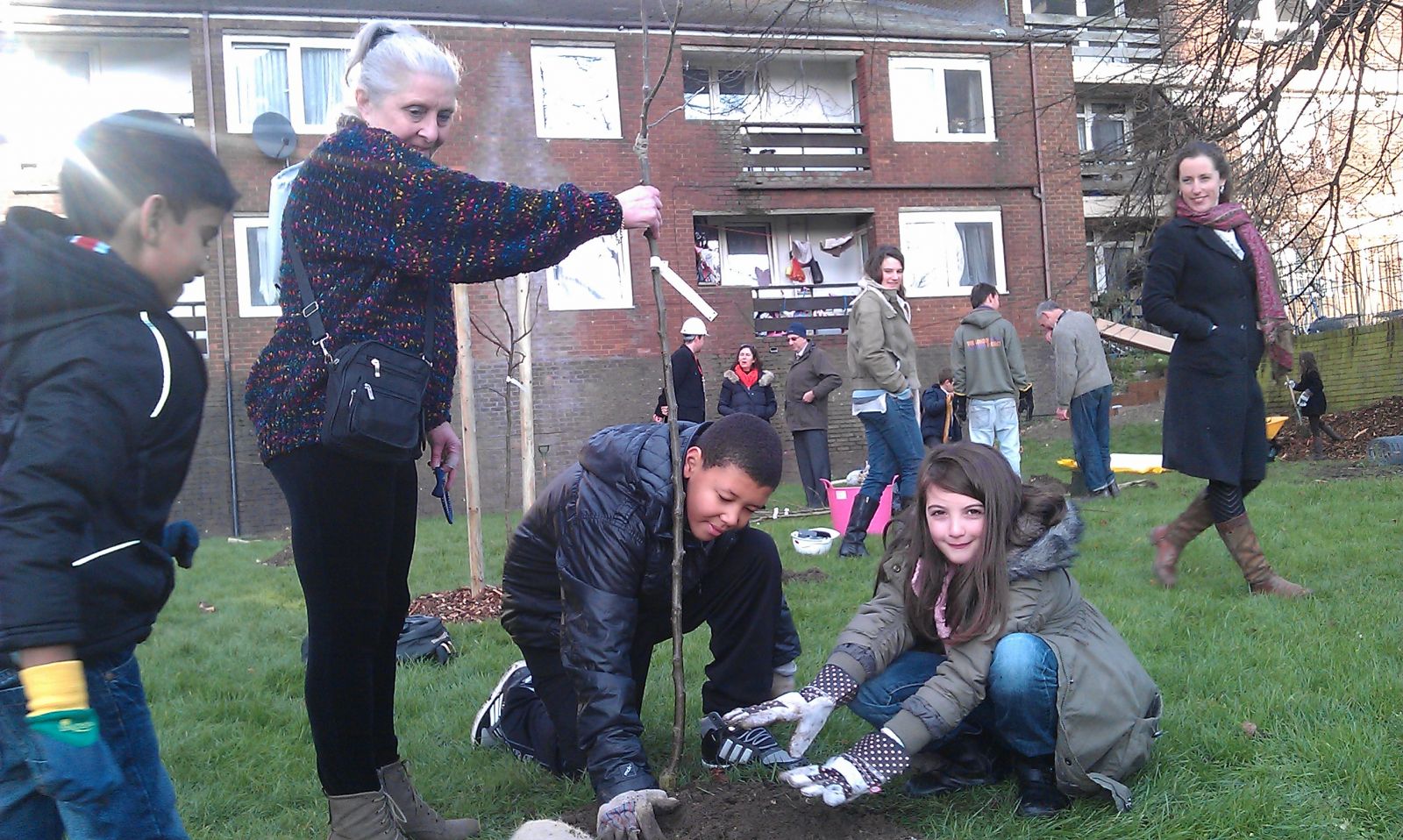 We also lost our first plum to, we think, silverleaf . This is an airborne fungal disease that affects plums in the winter. In the summer plums trees produce a sticky protective substance, but not in the winter and this is the reason we prune plums in the summer. Unsurprisingly the plum was near Plumstead, an area with a history of silverleaf. We’ll plant an apple instead as we’d never replace a dead tree with same kind. The orchard leader remembers scrumping for ‘Beauty of Bath’ apples as a kid so we’ll plant one of those.

We’ve also had our first Wassail, in Redbridge, where we sang the sap up into the trees, in a musical ceremony led by Mike Ruff. We have another coming up at Alara Wholefoods, at Camley St near Kings Cross on February 22nd. This is a fundraiser too and there will be yummy food and hot cider. All welcome. These are just two of many London wassails this year so hopefully we’ll have an abundant urban crop this year.

There’s even been a bit of time to make some short films. Here’s Lewis talking about finding the right natural balance to keep pests from damaging your trees;  and Amber with some ideas on how to involve the community and celebrate your orchard (top tip: friendliness and lots of tea).   http://vimeo.com/thelondonorchardproject