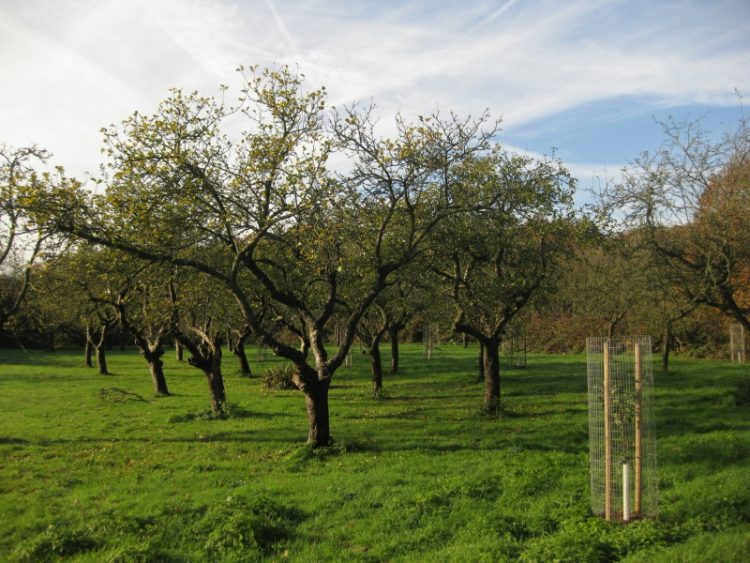 Claybury orchard, on grounds of former psychiatric hospital, in Redbridge

“Surely there are no old orchards in London?” was a comment we often encountered when we were developing A Celebration of Orchards: a 3 year project working with local communities to preserve and celebrate 30 orchards across the capital.

Well yes there are, even if they look a little different from the commercial orchards of Kent, or the cattle-grazed traditional orchards of Herefordshire. The UK Habitat Action Plan defines a traditional orchard as a group of at least five fruit and nut trees planted on vigorous rootstocks at low densities in permanent grassland and managed in a low intensity way. It recognises that “other sites which fall outside the definition (…) may also have biodiversity value, as well as historic, cultural and genetic importance”.

We used a broad definition to choose the orchards we would work with, in recognition of the history of fruit tree growing in London, and in order to include relict orchards and groups of fruit trees that have good potential in terms of fruit production, community engagement or biodiversity. The urban context of our project means these orchards vary hugely, from veteran apples and pears in ancient woodland, to a traditionally grazed orchard on a Thames flood meadow, and younger community orchards. 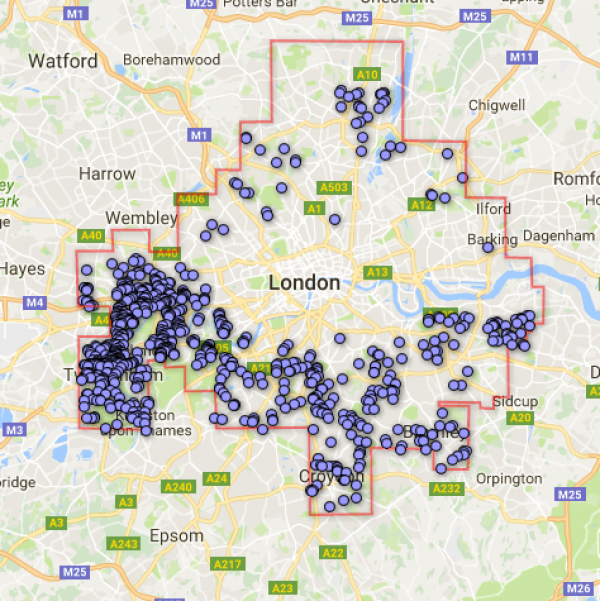 London has a rich orchard-growing heritage and orchards have played an important economic and social role in the capital, testified by place names such as Perivale (“pear tree valley”) in the west and  Plumstead (“place of plum trees”) in the east. Historical maps show orchards all over the city, even in the centre, providing food for the capital’s growing population. London, Surrey and Middlesex used to be primary fruit growing regions, and many old varieties were developed in South and South West London, as we can see from varieties such as Merton Joy and Hounslow Wonder. Merton was a major centre for developing apple varieties and rootstocks. The River Lea in the north east, and Twickenham in the west were also home to large commercial orchards. But the need to house London’s growing population meant homes eventually replaced market gardens, pushing fruit and vegetable growing further out of the city. Heathrow airport’s runways have replaced orchard nurseries, just a few metres away from the cemetery where Richard Cox, the gardener who developed the Cox Orange Pippin, is buried. Many remnants of this market garden heritage remain though, in private back gardens, parks and public squares.

This map – based on a review of Ordnance Survey maps of 1894-1897 at the British Library – gives a historical overview of the extent of orchards in London in the 1890s, with a noticeable concentration of orchards in South-West London.

Fruit trees were often planted on the grounds of hospitals, particularly asylums, for example Bethlem in Bromley, Claybury in Hainault, and the orchards in Horton Country Park. In Victorian times and earlier, it was believed that the best way to care for psychiatric patients was to keep them apart from society. Orchards played an important role in providing sanctuary and pastoral tranquillity. The fact that many such asylums have since closed reflects a political and social shift towards “care in the community”. Today orchards again have a role to play for people with mental health problems or learning disabilities, providing horticultural therapy, as they do at St Joseph’s Pastoral Care Centre in Hendon.

Orchards were often planted in the grounds of religious institutions, including convents and monasteries. They provided religious orders with places to reflect and wonder, and helped them be self-sufficient, reducing interaction with the outside world. The Carmelite monastery in Notting Hill is a cloistered order; the nuns still maintain a large fruit orchard and vegetable garden on their grounds, which their website says keep them “supplied with fruit and vegetables throughout the year”. As the number of people joining Catholic orders has diminished in recent years, many of these sites are being sold,  putting the orchards at risk from development.

Another important source of urban orchards has been allotments. The allotment movement began in the 19th century, when land was given to the labouring poor so they could grow food. The measure was desperately needed because of rapid industrialisation and the lack of a welfare state. After the First World War, more urban land was made available to assist returning servicemen. With the growth of supermarkets and cheaper food in the 1950s and 60s, allotments became less popular and some fell into disuse. But as history turns full circle, some former allotments in London have been reborn as community orchards, such as Downe community orchard in Bromley and Chinbrook orchard in Lewisham.

Today’s renewed interest in orchards in the urban environment may be traced to an upsurge in the environmental movement over the last 30 years or so. Common Ground, a charity founded in London in 1983, has promoted orchards and established Apple Day as an annual community event. As part of that movement, orchards are again being planted in London – no longer as private spaces but as community resources.

London is a mosaic of private and public land, housing developments, brownfield sites and green spaces, rivers and canals, roads and railways. The city’s orchards reflect that patchwork. They are tucked away behind school playgrounds and in pub beer gardens, or forgotten in overgrown woodland or the corners of parks. No part of London is wholly urban or rural, so even when orchards are situated in the heart of the city, surrounded by busy roads and buildings, such as Olden Gardens in Holloway or Ferry Boat Inn in Tottenham, they are close to the wildlife corridors of railway lines or canals.

Once a common sight within the landscape, orchards are now under threat, mainly because of land development pressure, neglect, a lack of skills and the absence of legal protection. Our old orchard trees are dying and they will soon be lost unless they are preserved through restoration and veteran tree management. London has already lost more than 98% of orchards since last century, and the conservation of the remaining orchards is a high priority. In recognition of this, orchards were made a priority habitat in the UK’s Biodiversity Action Plan.

We believe orchards in London are worth preserving because they connect people with their heritage and environment, act as oases of calm in a hectic city, promote health and wellbeing, are an attractive focus for engaging people and developing skills, and provide refuges for wildlife. If they are actively managed by community groups they are more protected from development threats, and more likely to thrive.

Do you know of any hidden or forgotten orchards across the capital? Let us know over on our Facebook page.

The Celebration of Orchards Project is funded by The Heritage Lottery Fund, The Postcode Lottery Trust, Heineken, Mercers Foundation and the GLA. For any more information about the project please contact Lizzie at elizabeth@theorchardproject.org.uk