2012 Has been described as ‘awful’, ‘horrible’, and ‘the worst year for apples in living memory’ by UK apple growers. Some are reporting as little as 10% of their expected harvest and it’s predicted that the UK’s overall apple crop is down by 50%, with commercially important varieties such as Cox’s Orange Pippin and Egremont Russet fairing particularly badly. Due to a lack of London apples, events such as Abundance’s popular Apple Day have been cancelled, and here at LOP our plans to make a decent quantity of local cider have been stalled for another year. It would seem fruit is not exempt from this year’s climate change induced global crop-bashing, with some globally important crops such as corn reduced massively, causing all kinds of knock-on impacts throughout the world. Of course last year saw a bumper crop of apples, so it could be expected that some trees would have produced less this year while recovering from such exertion. But other factors then conspired. It started with a mild winter – apples in particular require a certain number of ‘chill hours’ in order to form fruit buds for the following spring. Then, as drought warnings spread across our ‘green and pleasant land’ we experienced an unseasonal warm period in March, making it the third warmest since records began. This resulted in some fruit trees producing blossom prematurely. Then, just when we were stocking up on early sun cream and BBQ’s, the heavens opened. And didn’t close for around six weeks, successfully securing another record: the wettest April on record. Then another: the wettest April to June ever recorded. Collectively this contributed to the wettest UK summer in over 100 years. While the people of Cumbria and Yorkshire battled floods that submerged homes, washed away cars and derailed trains, and the Arctic summer ice melted away to a record breaking low, our fruit trees faced their own crisis.  As well as taking a battering from heavy downpours and gales, what survived of their delicate blossom grew lonely, being denied visits from its all-important partners in mutualism – bees and other pollinating insects. Like modern British people, honeybees don’t care much for the rain. Reluctant to forage in wet and windy weather, they prefer to stay put in the dry, warmth of the hive. Sadly, this means that this has also been a terrible year for bees, with many hives starving and even dying throughout that sodden period, not having sufficient food to keep them going. This prompted the more vigilant beekeepers to provide their workers with sugar water during what should have been a time of abundance. So our honey producers have also succumbed. Recently NASA’s scientists have been able to link specific extreme weather events such as the drought scorching much of the United States to anthropocentric (human-made) climate change, reasserting, as has long been predicted, that the more warming, the more frequent the occurrence of such events. Recent research has also suggested that Arctic warming and the melting of the ice may be causing the unusual weather we’ve been facing here in the past few years including long periods of wet weather during the summer months. This may be due to changes in meanders in the North Polar Jet Stream; the air current that acts as a barrier between the cold, wet weather of the northern hemisphere and the warmer, dryer weather to the south. So what does this mean for growing top fruit in the UK? Which varieties will prosper and which will gradually become unproductive? Is it worth us planting a heritage variety developed by the Victorians if 20 years down the line there are insufficient chill hours to set decent fruit bud? Here at LOP we’re going to be looking at more exotic varieties, for example, French apple varieties from regions that currently have a climate similar to that which is projected for Southern England in the coming years. But we’re also looking at more exotic species of fruit altogether and are taking great interest in the UK’s first commercially available olive oil for example, and the work of people such as Mark Diacono who is experimenting with growing fruits including pomegranates and persimmons in Devon. But in the meantime, how can we help our current stock of fruit trees realise their reproductive potential and ensure a more consistent crop during unpredictable weather? In all the recent discussion about bad apple crop and pollination, I’ve heard little mention of the possible benefits of focussing more on our native, solitary bees. Bees of the Osmia genus (Mason bees) are the smaller and more, err, solitary cousins of our well known furry friends and are known to be more efficient pollinators than both honey and bumble bees. Their high activity level and tendency to visit different trees optimizes the cross pollination required by most fruit trees and they seem to have a particular affinity for apple blossom. They are hardier, being able to forage in cold, wet weather while their cousins shiver and go hungry. According to one Parliamentary briefing paper, ‘Wild bees can be more effective on particular crops than honeybees. In apple orchards, 600 solitary bees can pollinate as well as 2 hives (30,000 honeybees)’. This is incredible – 600 of these lovely little fellas can do as much fruit-creating graft as 30,000 honey bees!!! 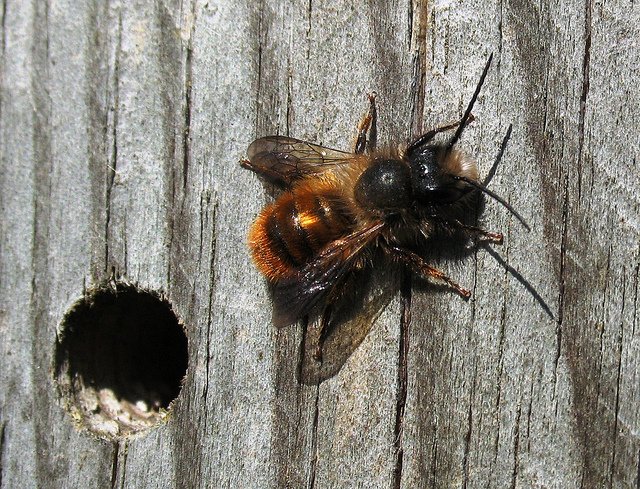 We often receive enquiries from our partner community groups about keeping hives near or in their orchards. Although we encourage this, it can prove tricky in some settings; schools and residential areas for example, where there are often misguided, but perhaps understandable, objections raised on the grounds of Health & Safety (incidentally many schools are now embracing beekeeping as an exciting teaching resource, at a time when many are realising the virtue of Risk Benefit Analysis). As if the reasons above weren’t enough for an Osmia revolution, they are even more unlikely to sting people than honeybees. Attracting them to your trees is cheaper than keeping honey bees too – all you need is a surface with some holes drilled in it for over-wintering and an offering of moist earth for a few weeks during spring (which they use as a nest structure building material). They are low-input, getting on with the job at hand without our interference and requiring little training other than some internet-garnered knowledge. So, as community orchardists in a changing world, maybe it’s time for us to focus on these, lesser known, hard working denizens of the buzzing world. There is loads of information online on how to make low-cost over-wintering homes for them, ranging aesthetically from rustic to urban chic (depending on your taste, not the bee’s), and where to position them.  It may not guarantee a crop, but it’s another example of us teaming with nature to help along the natural processes that are being increasingly challenged by man’s wider interference. Although we haven’t yet reached the dismal point where our fruit trees must be hand-pollinated by humans, like in some areas of Southern China, our beleaguered bees do need our help. And at the very least it will increase the biodiversity and beauty of your orchard as well as introducing another point of interest. Lewis