Home » Blog » Can you solve the case of the mystery apples?

On the edge of Warrington’s town centre, on the banks of the river Mersey and off a very large, very busy roundabout, is an ordinary, characterless retail park known as Riverside. I go there from time to time and usually I’m in no rush to stay.

But last month I pulled in to a crumbling corner of the car park and lingered. In front of me were two sprawling and unpruned apple trees. They grow on a steep verge between the edge of the car park and a heaving, six-lane road, in an area that has been used for nothing but retail and industry for the last hundred years. Why the trees are there, I don’t know. 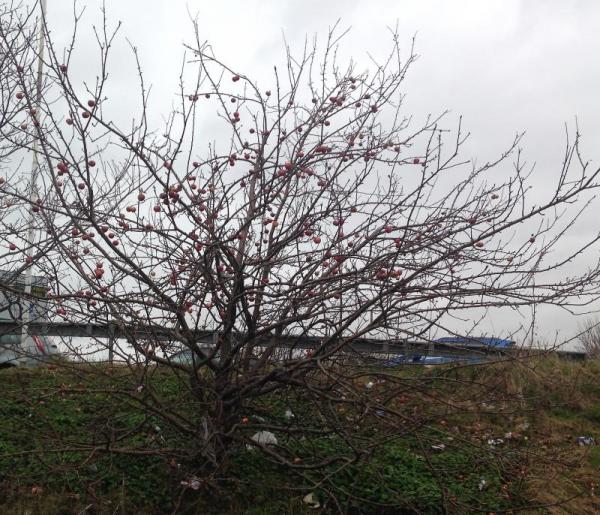 What fascinated me about these unloved and uncared for apple trees at the time, is that we were days away from spring – it was March – and both trees were bursting with fruit, which they’d clung on to loyally for the whole of winter. The fruit wasn’t rotting on the branches, but ripe and colourful. And to add to the mystery, one tree was holding green apples, and the other red.

It made little sense to me, but given I was about to start as the Chief Executive of the Urban Orchard Project for a year, I felt a sudden responsibility to take some samples. I clambered up each and took a few.

After some all-important home sampling with the family, I passed one of the apples on to Alan at the Urban Orchard Project, Project Manager in charge of our Helping Britain Blossom project in Leeds, and apple expert, who has promised to investigate further. I’ll let you know where we get to.

Right now I’m wondering if these are indeed a true variety of apple, rather than a chance seedling. If they are then given that they don’t create a glut, but instead sit ready for picking throughout winter, perhaps they’re a pretty wonderful community orchard variety. I’m also wondering though, whether this is more the result of a changing, warming climate, affecting the usual reactions in fruit trees that tell them it’s shedding time. Or maybe it’s something else entirely.

But I’m also struck that others out there might have had similar experiences and that a few of us in this fantastic community of orchard projects probably already know the answers. In fact, I’d bet a jar of apple chutney on it.

As I say, I have the privilege of heading up this brilliant project for a year. It’ll fly by, but I’d love to see if we can get a bit of a bigger conversation going over the coming months; to start to celebrate our stories across the country, share our knowledge and connect together. To build branches that connect the fruit, if you like.

So in the spirit of all of that, does anyone know what’s going on with my retail park apples? I could ask around the team at the Urban Orchard Project – most of them will forget more about fruit trees than I’ll ever know – but where is the fun in that?

All ideas welcome, join in the conversation over on our Facebook page.