On a lovely sunny spring morning in February I packed my backpack, tent and pruning tools and headed off from Hackney to Ragman’s Farm which is nestled in Raurdean, the Forest of Dean. After accruing a few days of TOIL from another hectic winter of pruning and mulching, I thought I’d spend a few relaxing days…pruning and mulching, and sleeping under canvas in an organic orchard. In September of 2011 I was lucky enough to attend one of Patrick Whitefield’s inspirational two week permaculture design courses at the farm. This was an incredible two weeks of learning, sharing, communal living and singing around the campfire, enhanced by the beautiful rolling Gloucestershire countryside. Ragmans Farm is a 60 acre organic farm that uses farming paractices that regenerate the land, using permaculture as a guiding design principle. They run sustainable land use courses and produce shiitake and oyster mushroom logs award winning apple juice, cider and perry. They have planted over 1000 apple and pear trees over the last 12 years including traditional verieties such as Ashmeads Kernel, Worcester Pearmain, Lord Lambourne and Egremont Russet, as well as newer modern varieties suitable for organic growing, like Saturn, Rajka and Ceeval (Red Windsor).  There is something very special about the farm and the people who run it and since completing the course I knew I’d someday return. In February 2012 I contacted manager Matt to ask if I could come and spend a few days

helping out around the orchard – namely pruning to hone my new skills, but also to learn more about the organic methods used in their orchards. This opportunity is usually only open to WOOFers for longer term stays, but recognising that I was a budding orchard geek, and being supportive of the work of LOP, he kindly obliged and I spent a happy 3 days pruning and swatting up. At this point I’d just started reading Michael Phillips’ ‘The Holisitc Orchard’, a wonderful book that has had a huge impact on our work at LOP, and I introduced it to Matt, keen to hear his thoughts about the methodology. The unseasonal weather at the time meant I was working in a vest and had to use suncream –in February! Little did we know at that point that 2012 would be such a mish mash of weather extremes, in the UK as well as globally (see earlier post: Climate change, blossom and the solitary bee). Interestingly, the only variety that produced a decent crop last season at the farm was Rajka. So once more I arrived at the farm and quickly set about erecting my tent. There was word that it would be a cold night with temperatures dropping to below -2 degrees, so I’d taken two sleeping bags and planned to sleep fully clothed.  By the time I reached my tent that night it was host to a healthy layer of frost on the outer sheet and once inside I only lasted two hours before waking up freezing, so I scuttled off into the nearest building and slept on the couch. I’m not usually one to feel the cold, but this was cold – and with some poorly calculated permaculture positioning I’d set up in a frost pocket! I felt a bit better about this later when Pete pointed out that the whole farm essentially sits in one big frost pocket! The next morning I helped Carine prune the apples and pear in her garden, and in return she kindly offered me a room in the farmhouse, being concerned that I might freeze to death in the tent. After lunch Matt ran through a list of jobs I could do; pruning some of the trees in the lower orchard, the neglected cider orchard on the hill, and some espaliers, and some mulching. I was delighted to hear that there was plans to experiment with ramial chipped wood (see previous blog). Matt had embraced the Micheal Phillips approach, indeed they’d already been using aerated compost teas (ACT’s), and are now keen to put RCW – younger, twiggy wood to use. One of the resources grown At Ragman’s is willow, so there is an abundance of fast-growing potential mulch on site, meaning no need to import any material – a closed loop system. 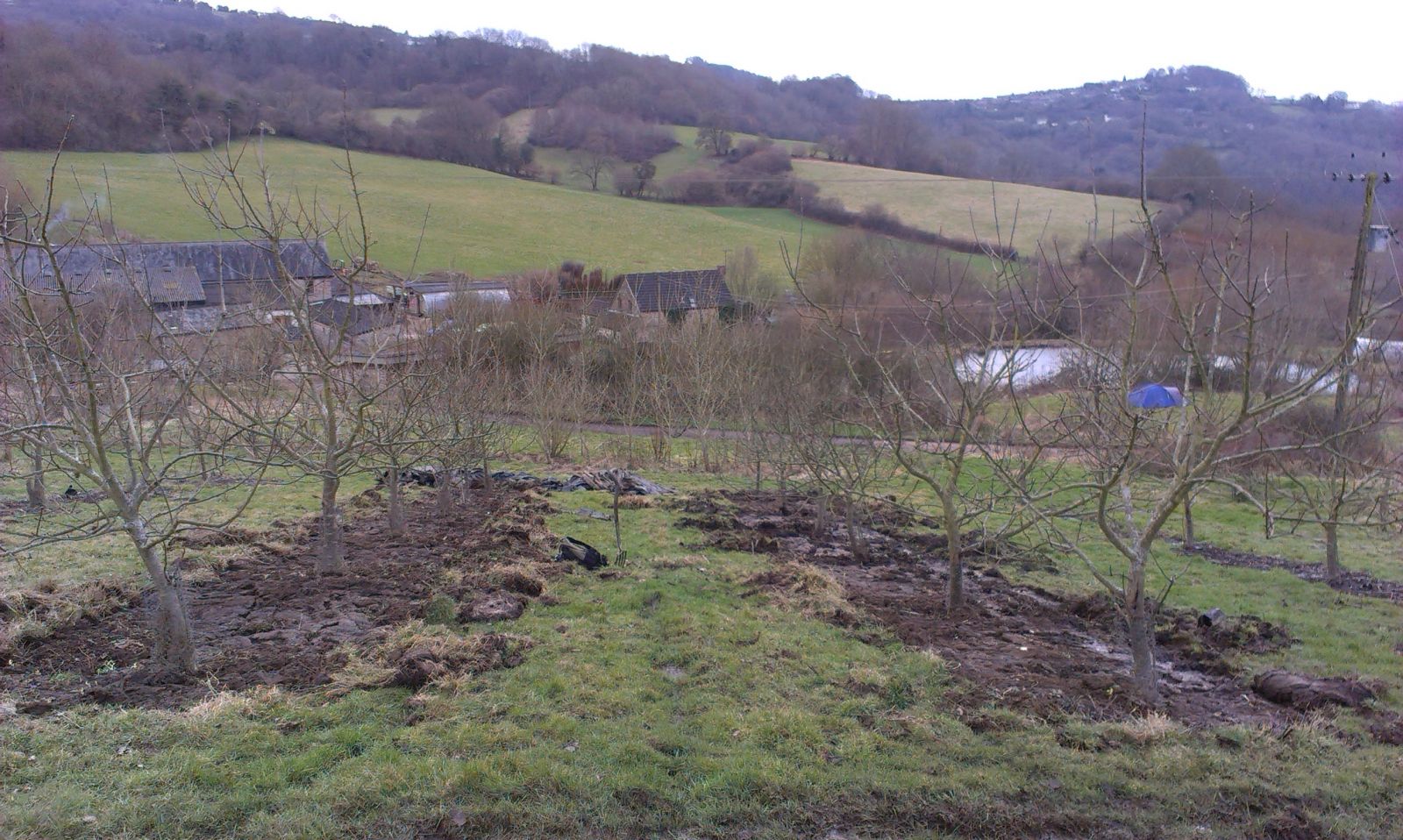 Two rows with plastic removed and ready for mulch 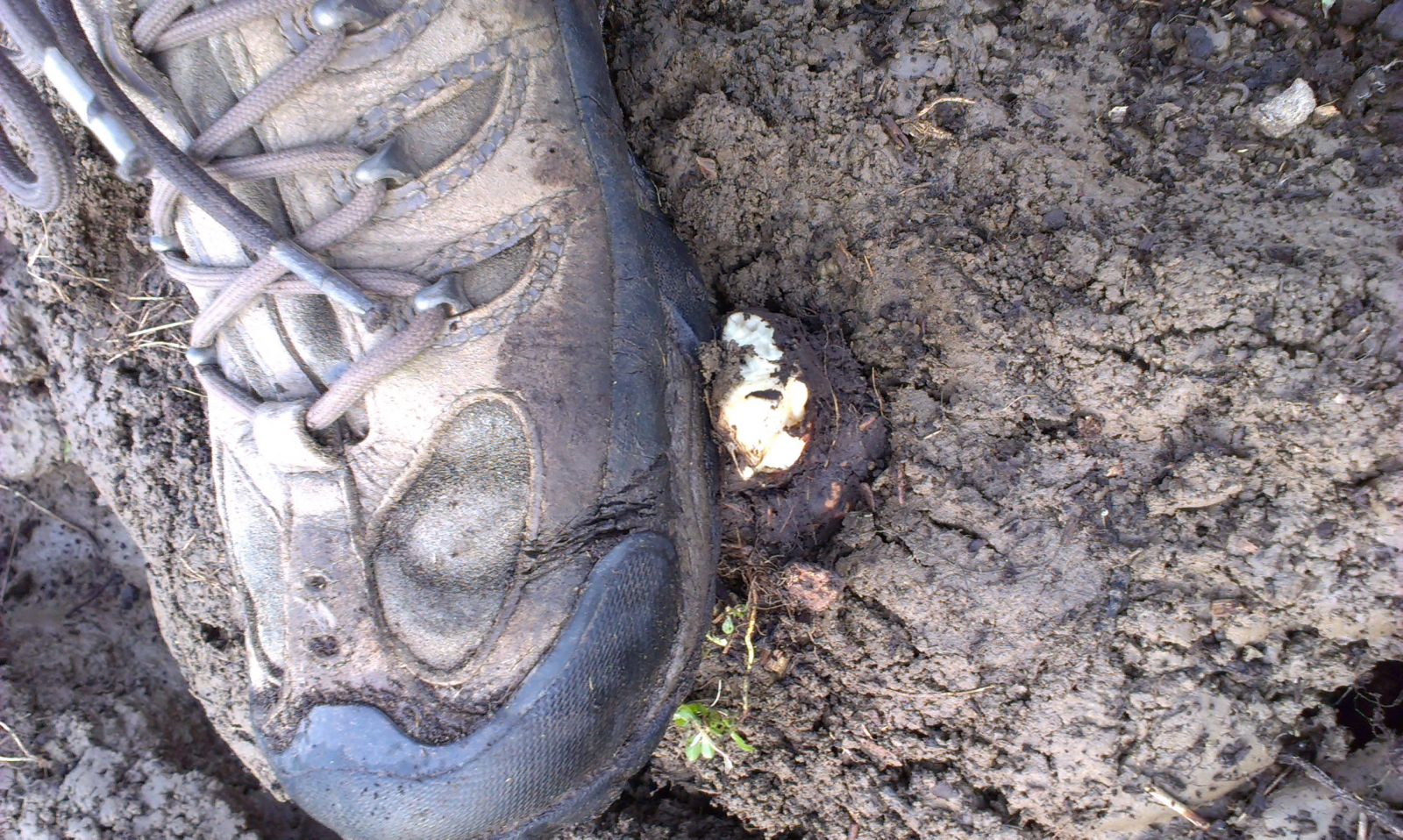 So I set to work on ripping up the plastic on two rows that had supressed the grass for seven years. This had been punched through with comfrey here and there – a ‘dynamic accumulator’ and somewhat of a permaculture wonder plant due to it’s multiple functions. It’s deep root mines nutrients such as Potassium from deeper ground out of reach of the trees and sends it to it’s abundant foliage, where it can be ‘cut and drop’ several times a year so that the leaves rot into the mulch and release the nutrients to the tree roots. Comfrey tea can be made and used as a fertiliser or a foliar spray, as is done at Ragman’s. It is also a great bee plant, and some varieties have medicinal properties too. 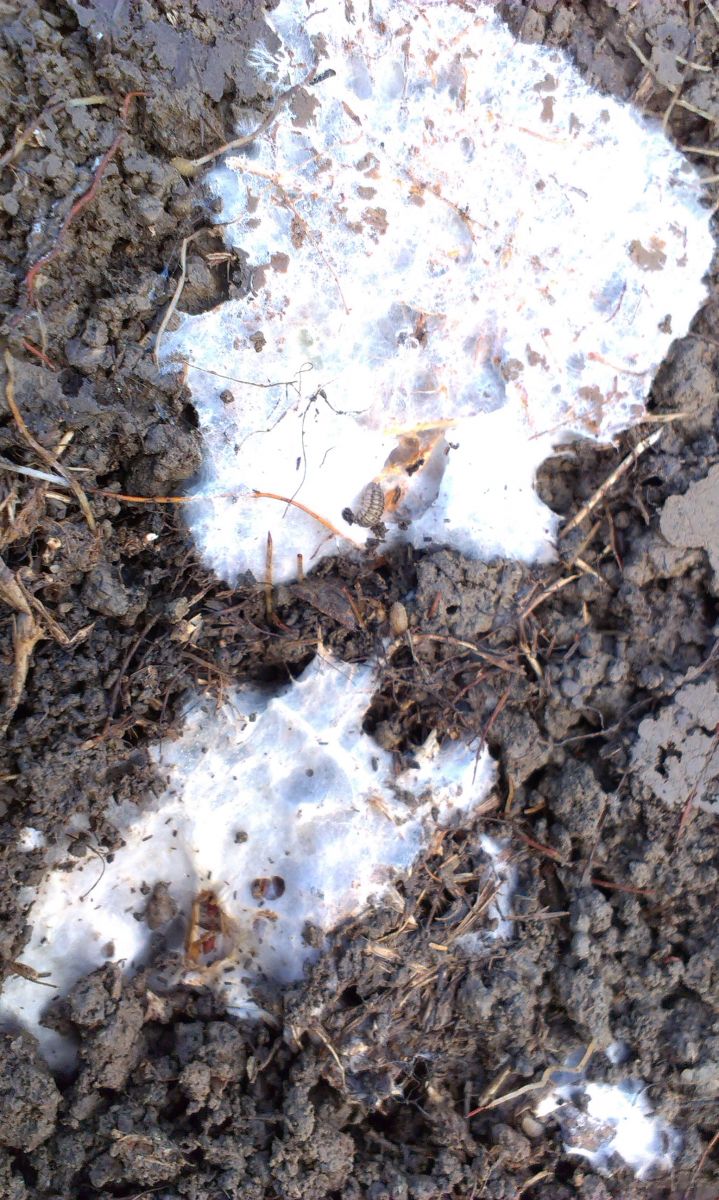 Pulling up the plastic was hard work as, despite being on a slope, the ground was water-logged due to the incredible amount of rain last year, with water flowing down and beneath the plastic, giving the appearance of rivulets of estuarine mud. This is far from ideal for the apple trees as they don’t like their feet wet for too long; another example of how climate change is affecting agriculture. Freya mentioned the possibility of planting willow above the rows to help mop the excess water….this could then be chipped for mulch right where it’s needed, a good example of the principle of ‘relative location’. As I went along I broke up the displaced comfrey roots and treaded sections back into the soil to spread it, and of course squirreled away a few pieces to take back to the new orchards of London. Here and there I uncovered pleasing patches of white mycelium – a great sign that the conditions are right for the beneficial fungi we’re seeking to nurture. As I worked, the wisened robins and blackbirds came close to pick off exposed worms, and, I like to think, the pupae of overwintering pests such as codlin moth. 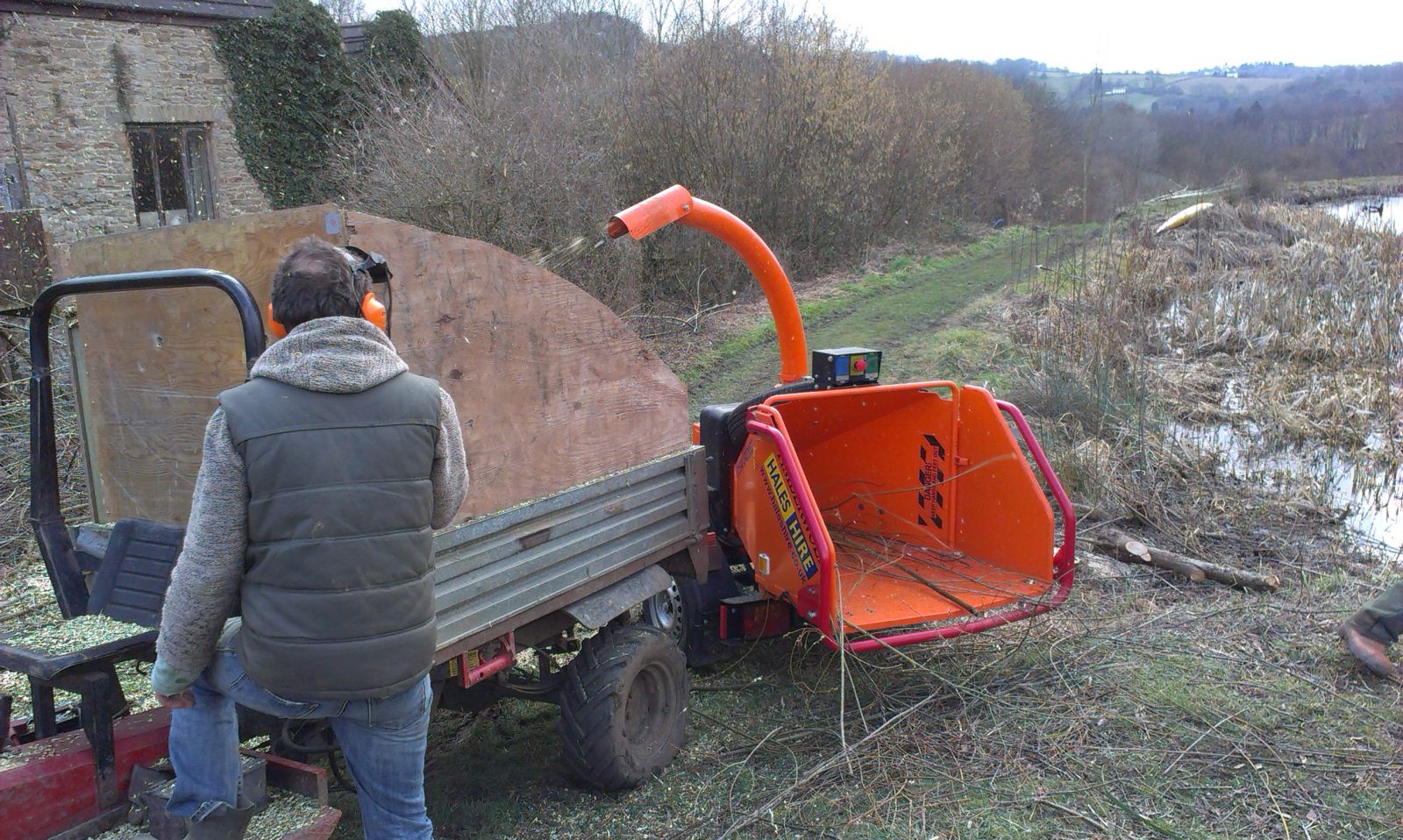 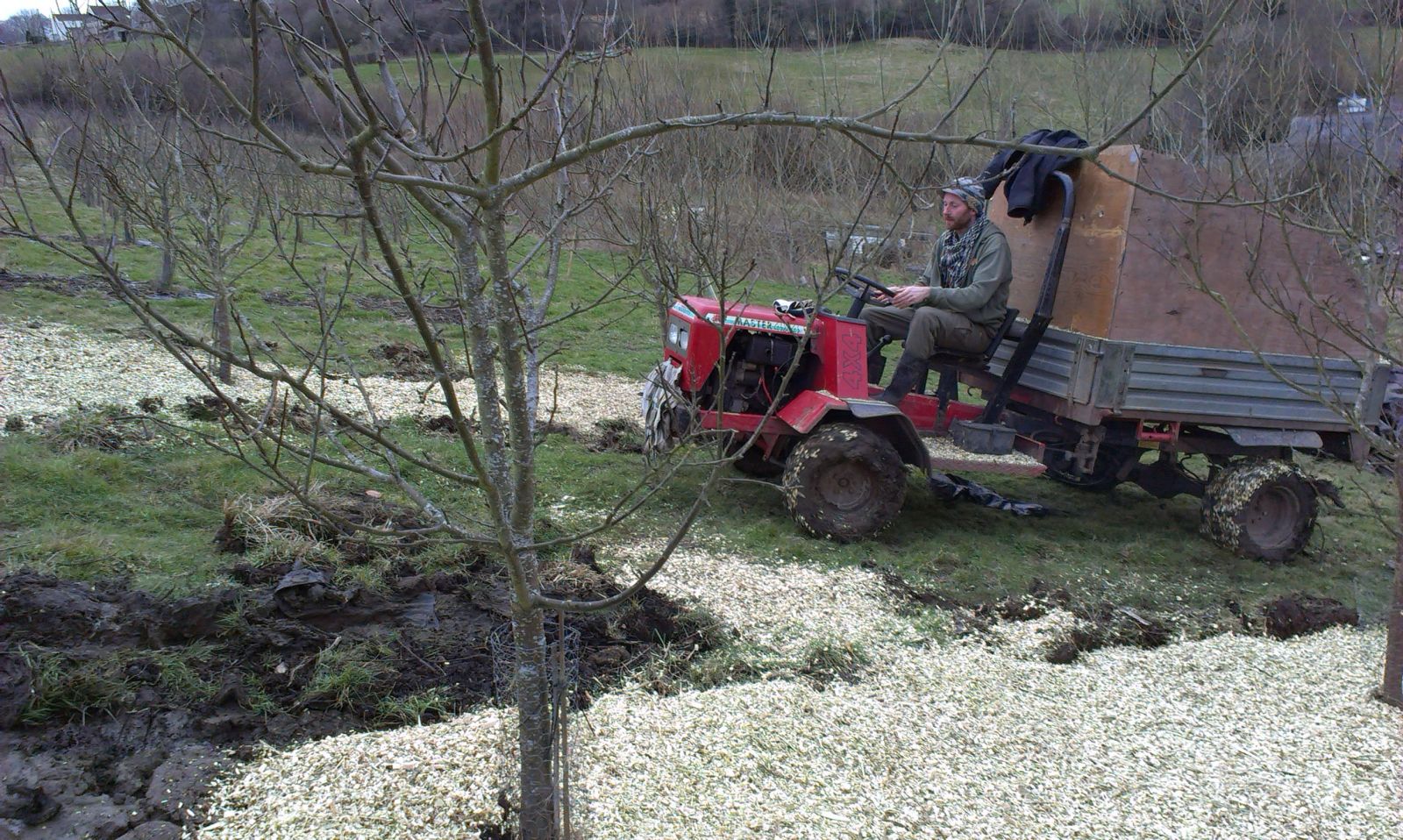 Navigating through the waterlogged alleys on ‘Dumpy’

The next day a hired chipper arrived and Matt, Pete and Chris got to work feeding it felled with willow of 3 inch diameter or less. This was spat into the back of ‘dumpy’; the little 4×4 tractor I’d learnt to drive the previous day. From here I drove dumpy up to the cleared rows and began to unload the chip, after first being rescued by Matt and his tractor after getting stuck in the thick mud!

I mulched 4 rows with this; two that have been covered in plastic for seven years so the grass has completely died back with comfrey planted intermittently, and two where plastic and comfrey has not been used. On the latter the chip will sit directly on top of the grass to test whether an additional barrier is necessary to hold back the vigorous grass, and to observe if RCW will cause a successional shift in the soil microherd, towards fungal dominance. This should eventually make it less suitable for the grass. There was a lot of shovelling involved and I mulched away like a madman, but it was satisfying work creating aesthetically pleasing golden carpets of fungal feast (and as the temperature barely rose above zero all week it kept me a great deal warmer than pruning would have). In London we’ve so far only managed to experiment like this on a much smaller scale (see previous post) so it was great to be a part of a much larger trial. I look forward to seeing pictures of the comfrey poking through the chip in the coming months. 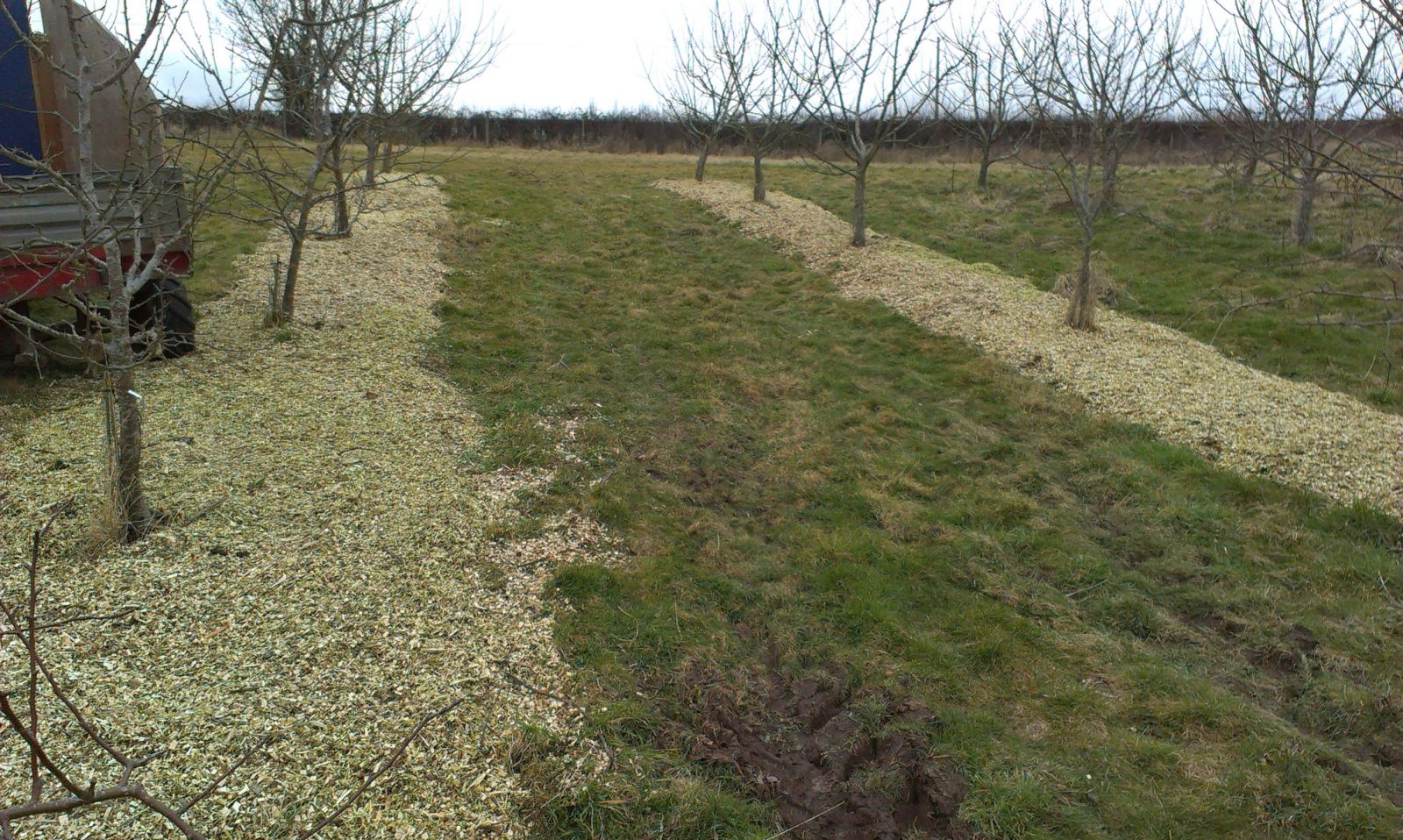 I managed to do some more pruning too, revisiting some of the trees I’d done last year, as well as some larger Ashmeads Kernels and an over grown espalier (sorry I only had time for the one Matt!). Matt  kindly gave me a bag of Oyster mushroom spawn as a thank you, so I can inoculate various items such as old paperback books to produce tasty fungi. People often put old books out on the pavements outside their homes in Hackney, amongst other bits and bobs, so I’ll keep an eye out for some battered ones that are unlikely to have any takers. My visit had once again coincided with one of Patrick’s PDC’s and so I spent the evenings getting to know the lovely international group of participants, sitting round the fire pit and drinking some of the tasty farmhouse cider and perry. One evening I gave a presentation about our work at LOP which was well received, everyone being keen learn more. On Saturday morning I decided to graft a pear for my kind hosts as a token of appreciation. Quite a few of the course took interest in this and before I knew it I was delivering an impromptu grafting workshop, before heading off together for scenic walk to the pub. Once again more my soul had been soothed by a trip to this inspirational farm in a splendid part of the country, a world away from the hustle and bustle of Hackney. But by planting urban orchards I like to think we’re bringing a little bit of Ragman’s to London…quite literally as I packed an assortment of comfrey starts, scion and rootstock cuttings from the trees to graft new ones for urban planting (not to mention the stow away willow chips that’ll be materialising from my clothes and bags for months to come). So, armed with my Oyster card and bag full of Oyster spawn, I headed back to the capital to continue the important work of spreading the mycelium of organic orcharding.