Home » Blog » An orchestra in an orchard

Our Edinburgh Project Manager, Chris, opens his ears to the sounds of the orchard in winter. He also considers ideas for community events that will tap into these aural pleasures.

What seasonal sounds in January and February, do you associate with your orchard? 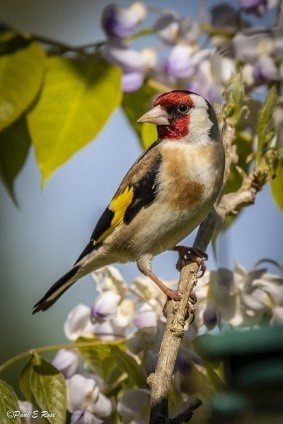 Is it the rhythmical ‘snip’ of secateurs, as fruit trees are given their winter pruning?

Or is it the ‘squeak’ of a wheel barrow, as wood chip is brought in to mulch around the fruit trees?

Or is it perhaps a ‘tchirrrrp’ of a bird, looking for nest material?

Standing in an Edinburgh orchard in midwinter, a nearby robin offers a thin, wistful song. Higher in the tree there is a ‘churrr’ of a blue tit, who then develops into a song. A song which sounds like the opening bar of Beethoven’s fifth symphony, ‘de de de deeeeeee!’

An orchard throughout the year can be a green haven of biodiversity, with many natural sounds. 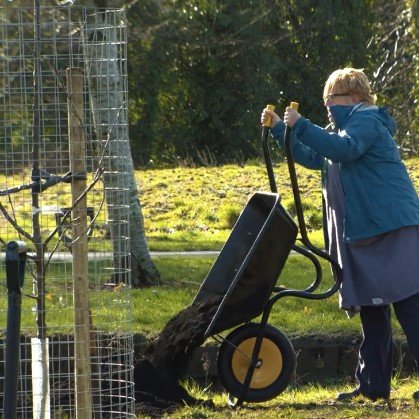 In January, birds are beginning to be more active, with many starting to find their voice. They will start to sing as a means of competing for territory, also seeking to attract a mate.

At the end of January, one idea for a community orchard event is to undertake the RSPB Big Garden Bird Count. Fun, easy and open to groups as well as individuals. To further celebrate birdsong, you could organise a birdsong walk, especially useful if wanting to raise the profile of your orchard. There may be a local RSPB group, or a Natural History group locally that could be able to provide expertise and enthusiasm to support such a walk.

From early spring, birds are busy making nests, and raising young. Why not support and encourage birds to your orchard by building nest boxes (see this RSPB nest box guide)? Or even some bat roosting boxes, with this guide by the Bat Conservation Trust. If you already have nest boxes, you could get active by being involved in British Trust Ornithology’s Nesting Neighbour project, on surveying and maintaining your bird nest boxes.

Along with the encouragement and appreciation of biodiversity in our orchards, there are some cultural celebrations which are held at this time of year. 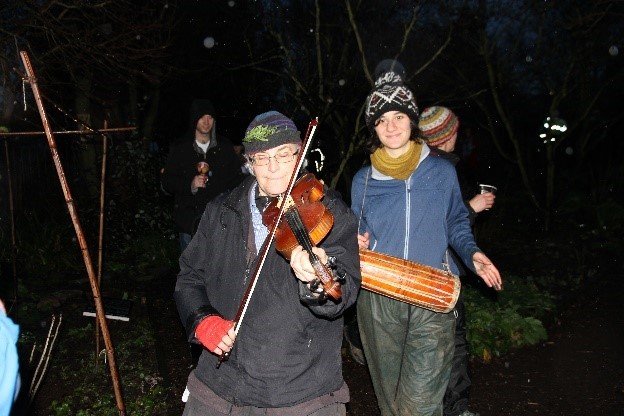 The traditional Wassail is a winter blessing for the trees, involving singing, crowing an orchard Queen or King and hanging toast in the branches. Often fuelled by mulled cider, wassailing has become a popular community event throughout the UK.

Other winter cultural celebrations, could involve inviting a local poet or storyteller to your orchard. In Scotland, Robert Burns‘ birth and poems are celebrated on January 25th. The local Edinburgh poet, Robert Ferguson, is acknowledged as being an inspiration to Burns. Ferguson was enthused by the tinkling song of the Goldfinch and wrote an ‘Ode to Gowdspink’.

Such cultural celebrations and storytelling can be a way to bring people together. They could perhaps be enjoyed ‘slurrrping’ a hot apple juice and around a crackling fire.

What seasonal sounds throughout the year, do you anticipate and look forward to?

Submit your favourite orchard sounds to Chris here: Chris@theorchardproject.org.uk. We hope to use these in a future blog post. As a ‘thank you’ for sharing these audios, we will send you a Info Sheets with our top tips for encouraging wildlife to your orchard.