I recently spent five sunny days at one of my favourite places: Ragmans Farm. I’d arranged to come and help with their annual spraying regime as the spraying regime at Ragmans isn’t your usual one. 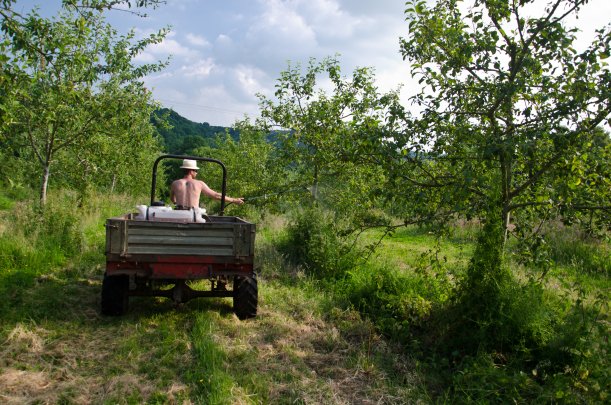 Most commercial orchards, including those certified organic by the Soil Association, still rely heavily on routine applications of copper-based sprays as a fungicide against scab and powdery mildew, the former being the bane of the apple grower’s life. However, copper sprays or ‘Bordeaux mixture’ damages the delicate web of interactions that occur on the leaf surface and in the soil. And, as it builds up in the system, it can be harmful to fish, livestock and earthworms.

In his usual humble manner, Matt, the farm manager, told me

“we’re not claiming to be experts on this and it’s still pretty experimental”.

At Ragmans the preferred term is ‘beyond organic’, as Matt says

“we need to get out of the habit of thinking antibiotically – ie spraying against pests and disease. We need to approach our orchards in a holistic, probiotic way. We need to strengthen the existing beneficial micro organisms and insects to produce food free from residues”.

So, enter the world of Actively Aerated Compost Tea (AACT). This wonderful brew is essentially a living liquid soil food web which is sprayed onto the canopy, trunk and surrounding soil of the tree, inoculating it with a micro-herd of beneficial organisms. The key word here is aerated; AACT is not to be confused with your pungent smelling, anaerobic comfrey or nettle teas which are usually applied to the soil only. AACT’s are brewed by bubbling air through a solution containing compost with ‘seed’ micro organisms. During this brewing process these tiny organisms will reproduce rapidly. By using different types of compost and additions, the tea can be nurtured to make it more bacterially or fungally dominant, depending on what type of plant you’re spraying.

Fruit trees prefer a fungally dominated soil, as they originate from a forest-edge ecology, so the order of the day here is a fungal-heavy brew, although it’ll also be teeming with bacteria, protozoa and nematodes. Choosing the right type of compost to start with is key, with a mature compost being a more fungal one. Pete had started the brew a few days before my arrival, based on one of Soil scientist Dr Elaine Ingham’s ‘recipes’. This involved suspending a mesh bag of mature compost in a barrel filled with spring water which runs down from the hills at the farm, tap water being unsuitable due to the presence of chlorimines which kill the fungi. “The council here started using chloromines instead of chlorine which means you can’t even leave it 24hours to evaporate off” Pete told me. Some forest soil and leaves from the apples trees are added, to inoculate the mix with the microbes already present and adapted to both the soil and phyllosphere (the above ground part of a plant as microorganism habitat). To get the fungi off to a head start, they’re offered a tantalising platter of seaweed, yeast extract, organic molasses and porridge oats. The organic choice is important; not because the fungi are fussy feeders, but because of the presence of preservatives in so much of our conventionally produced foods these days, which exist to destroy the fungi, not nurture it. 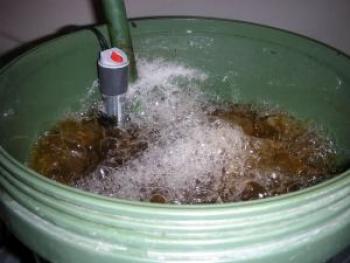 Vitally, the brew is aerated using a pond aeration pump and stones, for 2-3 days, in a cool place. Adequate aeration is critical and the water should look like it is at a rolling boil. The organisms must be active and growing to be producing the ‘glues’ or exudates required for them to stick to the tree surface. Without the aeration the mixture would quickly become anaerobic, and the beneficial microbes would die and be replaced by anaerobic bacteria and root-feeding nematodes and potentially harmful pathogens such as e.coli.

Then comes the spraying. Pete demonstrated using a lance spray, tank and battery powered pump. After re-acquainting myself with my old friend Dumpy (the little 4×4 tractor) I got to work giving each tree a healthy soaking, following the branches to the tips and back down to the trunk and importantly to the soil. Each droplet of the AACT contains a wide variety of microbes as they derived from a few handfuls of compost made on the farm from leaves, twigs, roots, shoots and the odd handful of garden soil. When a droplet lands on the tip of a leaf the microbes within that droplet that are evolved to work at leaf tips are activated and get to work protecting the leaf surface. Other microbes ‘switch off’. Conversely droplets hitting the ground will favour soil dwelling microbes that will then multiply to inoculate the soil.

These favoured microbes waste no time in munching other less favoured ones. As they increase in number they form a ‘thatch’, surrounding the leaf cuticle or root. A carefree rust spore floating on the wind will alight onto the leaf hoping to penetrate its unprotected cuticle. Instead it lands in the soup of microorganisms surrounding the leaf and is broken down by bacteria looking for a protein-rich fix. It’s an unforgiving microbe eat microbe world down there at the microscopic level.

said Matt. It can take up to 30 minutes for the fungi to attach themselves to the tree surface, so it’s important to spray on the shady side of the tree if it’s sunny, so that it doesn’t dry too quickly (the soil microorganisms are also sensitive to UV). And so I spent several happy days working my way along 1000 trees, intermittently returning to the barrel to refill the tank. This was the first time I’d visited in mid summer, so it was treat to witness the farm and its surroundings in full lush mode. The blackbirds and warblers sang by day (well, until I started up Dumpy’s engine) and the owls called through the night. It was nice to not have to worry about personal protective safety equipment (as the impromptu video in this blog shows); one can take a laissez faire approach to safety when using such a spray. And, as I’d frequently get covered by a fine mist of the stuff, I was thankful that it didn’t smell bad – had it been comfrey or nettle tea I’d have smelt like a sewer for weeks. However, I was grateful for my sunglasses; not even the most enthusiastic proponents of the soil food web desires a case of the ol’ nematode in the tearduct.

During the evenings I hung out around the fire with the latest permaculture students on Patrick Whitefield’s course, drinking cider made from the very trees I’d been spraying, and I gave a talk about how the Urban Orchard Project are applying permaculture principles to our work. On my last evening I went to watch England take one step closer to World Cup exit curtousey of Uraguay with the lovely crew at Ragmans Lane Market Garden: four inspiring young growers selling organic produce to pubs and restaurants around the Forest of Dean. Once again it was time to head back to the capital, something I always find hard to do after a few days at Ragmans (and one too many ciders the night before). I look forward to returning in October for some cider-related happenings. Thanks to the Ragman’s crew for the opportunity to take part in the spraying, the PDC group for their hospitality and enthusiasm, Cari for lending me her hat, Andy his camera and Steven for the impromptu photo and film shoot. 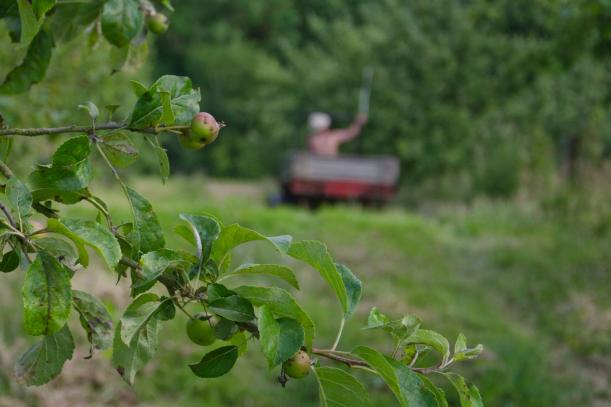