Our London project manager Lewis McNeill recently caught up with project friend and all-round orchard maestro Bob Lever aka ‘Orchard Bob’. We’ve been working with Bob for around five years now, focussing on the restorative pruning of London’s remnant traditional orchards. He has a great deal of experience and knowledge around veteran fruit trees and this is where his real passion lies.

LM: How did you come to be an orchard expert?

BL: I think I would describe myself as an orchard enthusiast, rather than an expert!
During the spring of ‘86, we moved to small cottage with some land, an acre of which was a beautiful old orchard. So I had to learn something about looking after the trees! One of my neighbours was a nurseryman and he showed me how to prune them.

The following winter, I began working for a local orchard services contractor, and continued to do so every winter for the next 12 years. At that time, there were still a lot of orchards in our area, with trees of all sizes and ages. Everything from tiny young Galas, packed thousands to the acre, to giant centenarian Bramleys. It was hard work, but the knowledge I gained was terrific.

In particular, I am glad to have worked alongside some of the older chaps, who’ve had a lifetime’s experience in managing the really big old trees.  I didn’t realise it at the time, but this particular aspect of orcharding was to become my passion.  Back then, I was just doing it to pay the bills!

LM: You’ve worked to restore many of London’s old traditional orchards…have you noticed any patterns i.e. where the remaining ones can be found and which varieties are there?

BL: Oh yes, there is definitely a pattern! Most of the old orchards I have worked on in and around London were what you might call “Institutional orchards”. They started life in the grounds of convents, hospitals, asylums and so on. They were planted to provide food for the residents. In the case of the old London County Asylums, they were would have been used for occupational therapy as well.

Because of the nature of these orchards, they tend to be made up mostly of worthy cooking apples; Bramley’s Seedling, Monarch, Lord Derby and Grenadier. These would have provided a supply of stewed apple from August until April!

Several of these old orchards have survived because they were incorporated into public open spaces when the original institutions were disbanded, so they managed to survive the usual devastation caused by housing development.

LM: Some of the remaining orchards in London were planted before modern rootstocks were popularized. What did people use before the Malling series was introduced?

However, a lot of the older trees would have been grafted onto what was known as “seedling stock”. Growers and nurserymen used to plant seeds, sometimes from crab apples, and then graft onto the saplings. The results would have been immensely variable in terms of vigour. I suspect that my own Bramley trees are on seedling stock, as they vary quite a lot in girth and vigour. Trees on the selected Malling stocks look at lot more uniform (like the trees at the Bethlem Hospital).

LM: What are the key considerations when pruning old fruit trees? How does it differ from the formative pruning of young trees?

BL: Very often, the first work you do to an old fruit tree is attempt to correct structural defects that have occurred as a result of a period of neglect. If you take a big old apple tree as an ,example.  It might have originally received formative pruning nearly a century ago, which will have encouraged the main boughs to grow outwards, rather than upwards. This would have been fine while the tree was hale and hearty and being regularly pruned, but such trees often fall into neglect, and you often see trees that haven’t received care for decades. As time passes, the tree grows hollow and the branches grow longer and heavier, and so the risk of the branches breaking or splitting the tree trunk increases. Restorative pruning is often about diagnosing which branches might be about to pull the tree apart if left untended.  It is usually dealing with weight reduction, and sometimes height reduction. The object is to try to extend the life of the tree, usually for landscape, biodiversity or amenity reasons. It is not usually to enhance fruit production, although that can be the case if the tree is healthy and responds well to the pruning.

Formative pruning of young trees is all about encouraging them to take on a good shape, to enhance future management and fruit production.

I suppose that formative pruning is akin to teaching your toddler to stand, walk and run. Restorative pruning is a bit like helping an elderly relative down the stairs and then settling them into a comfy chair. 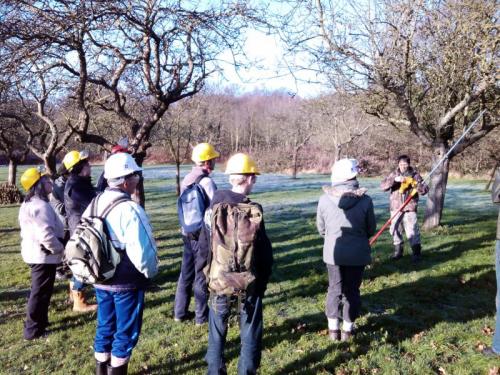 LM: We’ve heard of many instances where a person has had a tree surgeon or gardener prune their old apple tree only to find that it responds by turning into a thicket of dense new growth, or at worse, dies not long after. Why is this?

BL: Quite often, it is a case of having too much taken off the tree in one hit. With older trees, it is wise not to take out more than 20% of the live canopy in one season.

A healthy and vigorous tree responds to hard pruning by growing like mad in an attempt to put back the growth that it has just lost. The result being the thicket of dense new growth.

A senescent tree cannot do this, it simply doesn’t have the ability to replace lost branches quickly. For example, if you have a very elderly and weak growing tree and you remove half of the live branches, you have halved its ability to feed itself through photosynthesis. As a result, you may have hastened its decline.

One of the problems is that gardeners and tree surgeons cannot usually persuade their clients that the work may be better phased over 2 or 3 years.

LM: Most mainstream literature on pruning old fruit trees talks about removing all dead wood as a standard process. In your workshops you emphasize the importance of dead wood as habitat. So, should it stay or should it go?

Obviously, one has to consider the health and safety of the tree and anyone who might be sitting underneath it. If a dead branch is very big, very heavy and rather fragile, it probably needs to come off, or at least be reduced in size. (After all, if Isaac Newton had been hit by a great lump of deadwood, the history of physics might have been very different!)

If a branch is clearly diseased, I would remove it. However, deadwood is often the result of breakage, bark stripping, lack of light or all manner of things that will not compromise the remaining live parts of the tree. In these cases, there is no reason why it shouldn’t be retained to provide food and homes for bugs and beasties and birds.

LM: And, finally, which variety best describes your personality?!

BL: That would have to be a Norfolk Beefing: dense, thick-skinned and of limited use, but pretty hardy and hopefully may improve with age!